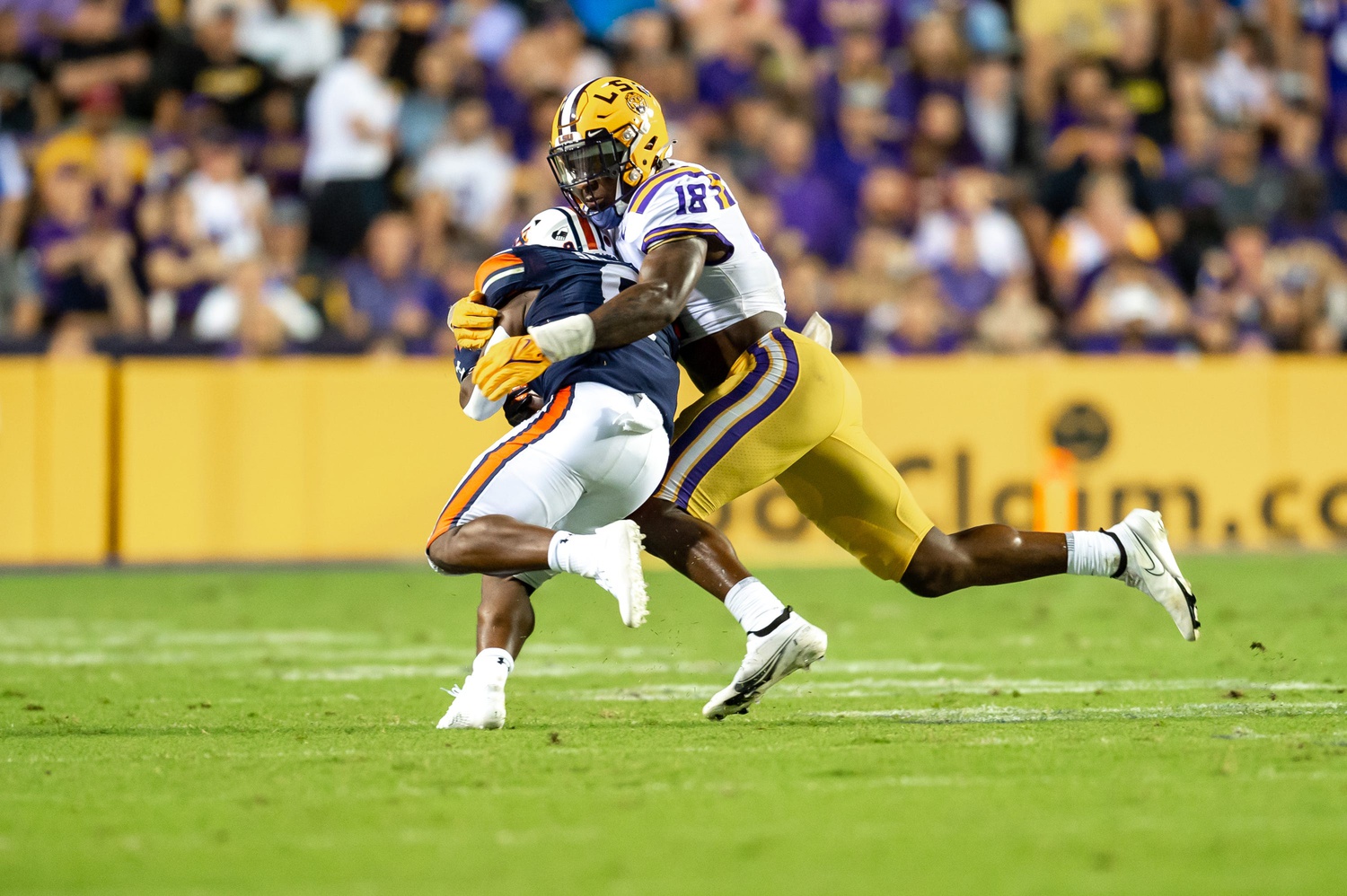 A leader by example between the lines.

Clark has an incredibly high motor. There is a play every game where he is running down ball-carriers 30-plus yards down the field. His motor is also present in his relentless pursuit of mobile quarterbacks when he is blitzing. One of the best motors I have seen in this year’s class. Plays every snap full speed.

Big, physical and effective as a pursuit player.

Clark’s tackling is highlighted by his sideline-to-sideline pursuit and tackling radius. Clark uses his great arm length to absorb and bring down defenders. Has exceptional overall speed that makes him a great pursuit player. Would like to see him improve in his physicality as a tackler in the box, playing downhill and striking ball-carriers.

Damone Clark is a two-year starter for the LSU football team. Prior to the 2020 season, he was named a team captain and given the No. 18 jersey—in the LSU program, that jersey is given to a player that shows high character on and off the field. During the 2020 season, Clark struggled to play at a high level and was pulled in and out of the lineup for the Tigers. Clark turned the corner in 2021 and played the linebacker position at a high level. He plays the game with a high motor that has become infectious across the whole defense.

He is a versatile defender for the Tigers and it shows in his stats, recording more than 100 tackles and five sacks during the 2021 season. Clark has exceptional athleticism and makes plays all over the field. Clark has outstanding closing speed to ball-carriers that allows him to pursue and tackle ball-carriers all over the field. Clark is a special athlete at linebacker that uses those athletic traits to track and pursue ball-carriers and is a big reason why he ranks amongst the top in the nation in tackles for the 2021 football season.

Ideal Role: As a boundary linebacker where he can use his athleticism to pursue ball-carriers.

Scheme Fit: In a multiple front; WILL linebacker and occasional edge rusher

Football IQ/Instincts: Clark is best when plays are well defended and he can just attack. He struggles against misdirection or counter runs that have multiple different keys involved. Will occasionally jump into the wrong gap, which can lead to big runs on the ground. Also plays timid at times because he is trying to make sure he is in the right gap.

Pass Coverage Ability: Uses his speed to quickly cover the field. Has the size and length to match up with TEs. Excels at turning and running with slot players running down the seam and showcasing his exceptional speed in zone coverage. Occasionally gets beat by backs and TEs on short-to-intermediate routes.

Run Defending: Clark has an inconsistent approach to being a run defender. At times, he diagnoses and shows a quick burst toward the line of scrimmage to make a tackle for loss. Other times he plays timidly, waiting for the play to fully develop before choosing a gap to penetrate. This hesitation often allows for offensive linemen to climb toward him down the field, leading to a big-time run.

Lateral Mobility: Clark has a long lower half that limits his quickness in his change of direction. His lateral movements when defending the run consist of him turning and running down the line of scrimmage—he displays rare sideline-to-sideline speed. Clark’s lateral movement while tackling defenders in open space is great because he is able to use length to close distance between him and the ball-carrier to make him an effective tackler in space.

Flexibility: Clark displays slight hip stiffness that affects his ability to stay square and shuffle parallel to the line of scrimmage during run plays. Clark classifies as more of a turn and run defender when in pursuit sideline to sideline. Stiffness is not a glaring issue, but I do believe it affects his short-area quickness when diagnosing run plays between the tackles.

Versatility: Throughout the season, you saw the LSU coaching staff tap more and more into Clark’s versatility. He not only lined up at ILB but was also lined up as an edge rusher on plays late in the season. He is also an effective blitzer when asked to. His great length and athleticism allows for the coaching staff to line him up in multiple positions along the front seven.