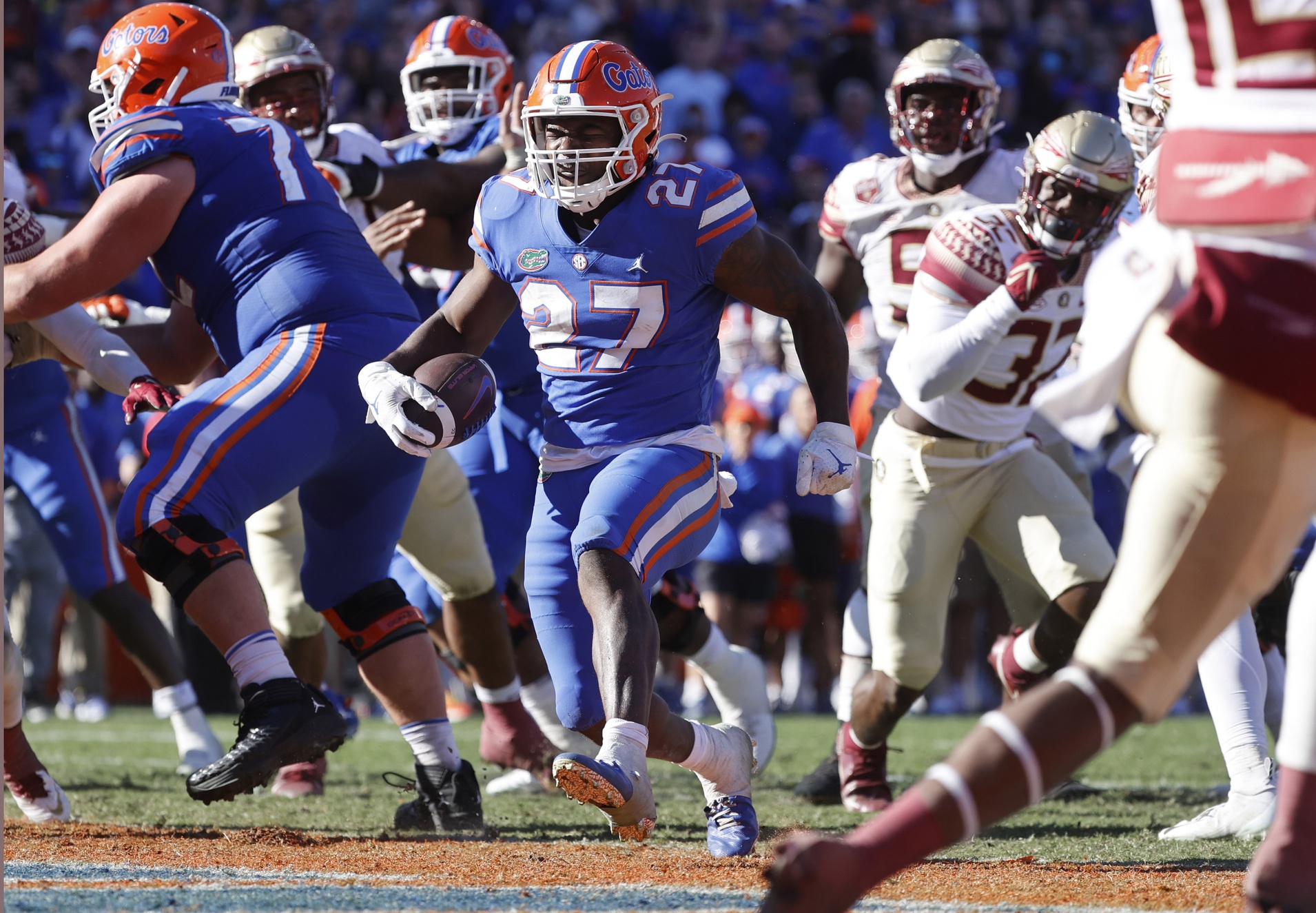 Pierce is sound with his ball-handling. He didn’t fumble at all in 2021 and never had more than one fumble in any season prior. He takes care of the football and the numbers provide evidence to that.

Pierce has a straight-forward skill set and he operates within that. From my exposures, I didn’t come away disappointed in any reps where he unnecessarily worked off-script and he’s committed to good tracks with the football that are within his capabilities. He’s very steady.

Dameon Pierce was a steady presence in the Florida backfield and given what he showcased when he received opportunities with the football, I’m left wondering why it wasn’t a higher priority for the Gators to get him involved. Pierce is known for his football character and produced when given chances. Pierce features a stocky build with a sturdy lower half engineered to play running back in the NFL. He is a tough, physical runner with good vision and a compact style. He has excellent contact balance due to his low center of gravity, competitive demeanor, sturdy base, and functional strength. He is an outstanding between-the-tackles runner but has the acceleration and lateral quickness to work off-tackle. While he wasn’t overly productive in the passing game for Florida, he was consistent catching the football from my exposures and has the makings of an excellent back in pass protection in the NFL. Pierce is a disciplined runner that takes care of the football and runs angry. Pierce isn’t going to wow anyone with his elusiveness or game-breaking speed and he has plenty to prove regarding his ability to contribute as a receiver. With that said, when you study Pierce, there’s no reason to believe that he can’t be a quality No. 2 back in the NFL and a spot starter. He has plenty of experience on special teams and has value on every down.

Ideal Role: Rotational back that is used between the tackles, in pass protection, and special teams

Vision: Pierce has good vision and sees the field well, which is complemented by good decision-making. He isn’t overly creative when forced to work off-script, which is not unexpected or much of an issue for the skill set he brings to the table. Throughout his career, he’s been tasked with plenty of chances in both gap and zone runs where he shows comfort in either scheme.

Footwork: I appreciate the compact nature of Pierce’s footwork and how that enables him to get positioned to attack creases. He does a terrific job of staying square to contact and positioning himself to take on defenders. He operates from a sturdy base.

Durability: Pierce was only tasked with a modest workload in college. While he was a steady presence for the Gators backfield since 2018, he never commanded a significant amount of touches. Despite being a senior, he has plenty of tread left on the tires and he’s built to handle the physicality required to play running back at the next level. He is known for his effort and commitment in the weight room.

Explosiveness: While Pierce lacks top-end burst and speed, he isn’t deficient. He has the juice needed to work off-tackle and challenge pursuit angles. He won’t be confused as a burner, but he shouldn’t be confused as a plodder—Pierce is a sufficient athlete.

Versatility: Pierce has been given plenty of work in both gap and zone runs with the ability to execute in either scheme. He doesn’t have much production as a receiver but looked comfortable catching the football in my exposures. He is a competitive pass blocker that has the potential to be an asset in that capacity in the NFL. Pierce has plenty of special teams experience in college with extensive work on the kick and kick return units.

Elusiveness: Pierce is a compact runner with sufficient lateral quickness. With that said, he doesn’t bring an overly shifty, twitchy, or elusive skill set to the table. That’s ok; it’s not who he is as a runner and he executes with an awareness of his skill set.

Passing Down Skills: While Pierce wasn’t featured as a receiver at Florida, he looked comfortable catching the ball in my exposures. I don’t believe he has the upside to truly become an elite receiving back where his route-running is the catalyst for his success, but he should be proficient with basic routes from the backfield and catching the ball cleanly in the NFL. I do believe he has the upside to be an above average pass blocker. In college, he shows a competitive demeanor and I love how he squares up, sinks his hips, fits his hands, and absorbs pass rushers.