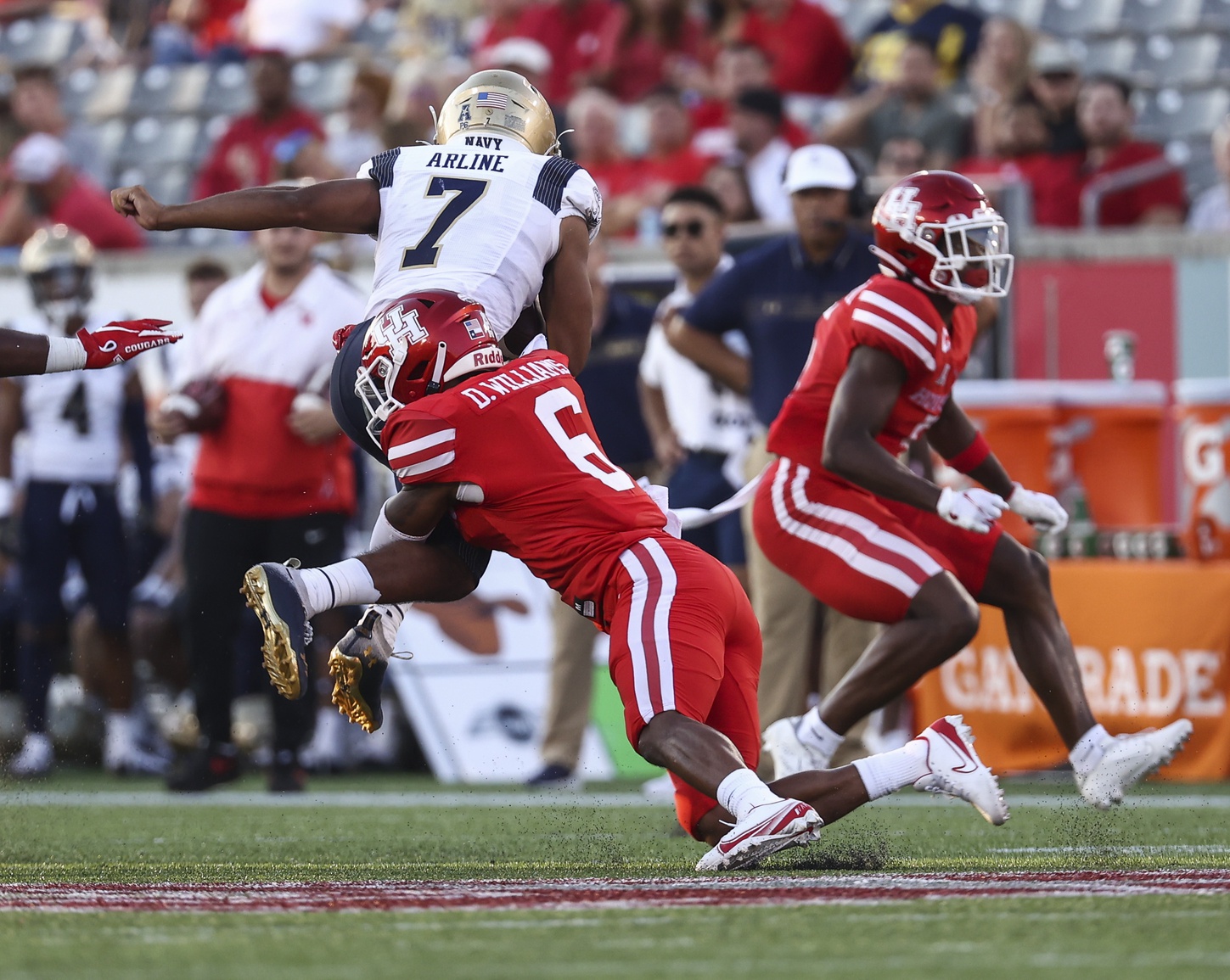 Williams understands how to space the field in zone coverage and fill his role to maintain the leverage of the coverage. He anticipates route combinations and does well to work into throwing lanes. He makes good adjustments on the fly and never appears calculated.

I love the way Williams triggers and tackles. Despite being undersized, he is enthusiastic about driving forward and making tackles. He aims low, wraps, and brings his feet through contact. His ability to tackle increases the favorability of his projection to the slot.

After a standout run at Highland Community College where he collected 10 interceptions, Damarion Williams took his game to Houston where he immediately became a starter in 2019 and his role expanded every year. The Cougars played Williams as a wide corner, inside corner, and safety with regularity but his best role at the next love comes at the slot. Williams has the foot quickness, speed, fluidity, and pattern-matching skills to play man coverage in the slot and his route anticipation and ability to space the field shines in zone coverage. He is enthusiastic about triggering downhill and defending the run. He is an aggressive tackler that hunts the football in pursuit. Despite being undersized, his competitive toughness shines when watching him play. While not to the same degree as in the JUCO ranks, Williams has showcased the ability to make dynamic plays on the football and be disruptive at the catch point. The concern with Williams at the next level is his lack of height, mass, and length and the natural limitations that presents in terms of matchups and alignments. He has the makeup of a quality nickel defender but how he holds up given his lean frame is a major question mark.

Man Coverage Skills: Williams has the foot quickness, fluidity, and pattern-matching skills to hold his own in man coverage. While his frame translates poorly to full-time duties on the outside, he has the upside to match up with slot receivers as an inside player. He anticipates route breaks well and is sticky.

Ball Skills: Williams has dynamic click-and-close ability to drive on the football and disrupt at the catch point. He also fared well for himself with his back to the line of scrimmage tracking the football and getting himself in position to make a play on the ball. More ball production would be preferred but he’s gotten his hands on his share of footballs and doesn’t appear lost trying to find it.

Versatility: Houston used Williams as a safety/nickel hybrid that also had his share of reps as an outside corner. At the next level, he’s best suited to play in the slot but would understand the appeal of using him as a slot safety type player in a Phil Snow-style defense. He has playmaking ability in coverage and defending the run.

Competitive Toughness: Williams is undersized but he competes well above his weight class. He functions with a hot motor and is urgent in pursuit. He’s physical when playing off contact and tackling. I love his competitive demeanor.

Functional Athleticism: Williams has the requisite foot quickness, speed, and fluidity to serve in the slot. He maximizes his functional athleticism by taking good angles and smart processing skills. He is at the very least a sufficient athlete.

Football IQ: Williams is a smart processor that anticipates route combinations in coverage and is rarely caught out of position or in recovery mode. He processes the run and quick game well with a dynamic trigger to fly downhill and finish. He immediately became a starter at Houston after transferring from the JUCO ranks and was a team captain in 2020.

Run Defending: Williams has size deficiencies to be mindful of, but he’s enthusiastic about playing off contact and fitting the run. I trust him in the slot to fill his role and be physical. The concern is simply his size and how he’ll hold up playing closer to the action at the next level.

Length: Williams has modest length and it’s far from an asset to his game. He doesn’t have much in the way of margin for error because he doesn’t have plus length. His lack of size is part of the package to consider with him as a prospect.