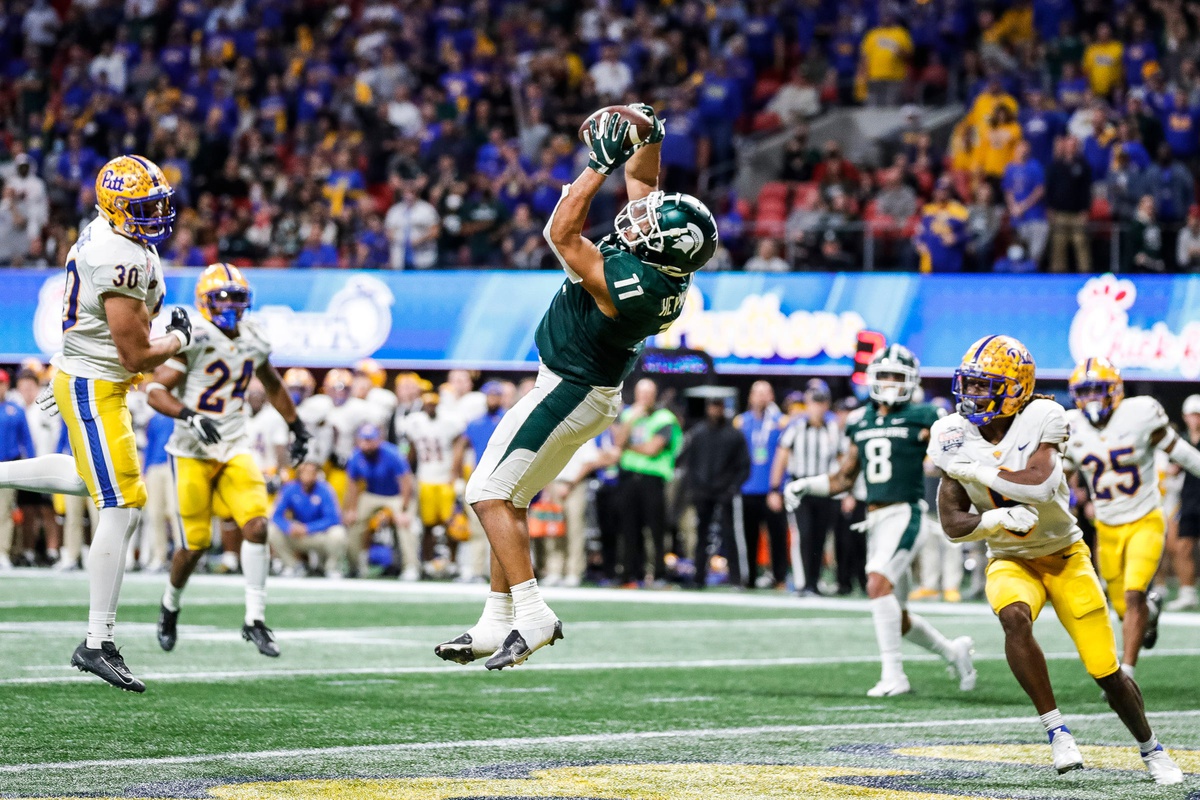 You can’t help but love the effort he puts forth. A selfless transition to a new position is a testament to his hunger to get on the field. That said, his functional strength for the position is adequate at best and his ability to impose himself on defenders is limited to run after catch opportunities when he breaks into space.

Michigan State tight end Connor Heyward is an admirable story. He transitioned from the running back position to play tight end for the Spartans in 2021 in a bid to help the team and optimize his playing time. The effort paid dividends with a career-high in receptions (35), receiving yards (326), and receiving touchdowns (2) over 12 games played. Heyward doesn’t have high-level physical tools and he at times “wins ugly” in his role, but nonetheless, he has won his reps with consistency and was a key role player in Michigan State’s explosive offense. Projecting him forward, I think Heyward is going to need to find a home where he can continue to “win ugly,” playing on special teams and executing a lot of dirty work in an offensive system that looks to add on to the blocking surface in both the run and pass game with untraditional alignments. I love the story and Heyward is a highly-competitive player on the field, making him a proper investment late in the draft for his ability to fulfill a handful of roles and play special teams.

Hands: Heyward shows plucky hands and has made several high-difficulty catches to help out his quarterback. He appears to be natural here and should not be challenged with throws modestly off target as a result.

Route Running: Heyward appears to be raw in this regard—understandably so. He’s had some reps flexed into the slot and routes there are not overly fluid or dynamic and his ability to sell the stem and create separation isn’t inspirational at this point—I’m not sure how much of an athletic ceiling there is to tap into for growth.

Versatility: Heyward has a heck of a resume. He’s returned kicks and punts early in his career, has two 30-plus reception seasons on his resume, has a 500-plus yard rushing season on his resume, and has now been charged with a blocking role and completely transitioning to a role player at tight end.

Ball Skills: Heyward has flashed an effective ability to adjust to throws in both the intermediate areas and when targeted in the flats and moving away from his passer. His catch radius is sufficient, but his contortion skills and functional athleticism to peel back to the football on inaccurate throws will be a limiting factor.

Blocking Skills: He’s clearly a work in progress here on instances of blocking the end man on the line of scrimmage. He’s frequently outreached, doesn’t show high levels of functional power, and can be overwhelmed trying to anchor. He takes good angles in slice motion in the backfield and is effective to pop in said instances to help spring his teammates.

Football IQ: A four-year running back switching to tight end in his final season opens the door for some growing pains and you see that in a number of instances. He’s going to have to appeal on special teams or else he may struggle to find his footing as a receiving option sans a very one-dimensional role.

RAC Ability: His field vision and aggressiveness with the ball in his hands are plus qualities—a testament to his background—but he isn’t especially dynamic as a runner and his best bet to create yardage is as an unoccupied underneath option.

Pass Protection: Heyward appears to identify pressure opportunities and is at his best when he’s aligned in the backfield to scan protection responsibilities and then step to contact. He’s got enough size and enough pop to stun runners attacking the pocket and has the right temperament to fulfill a role here.

Big Play Ability: Heyward isn’t going to be someone who shines as a receiver and I would consider his role complementary. The ceiling here is going to be dictated with what other options exist on the offense and how much attention they can create. I do not think you’ll see a lot of chunk plays on his resume.