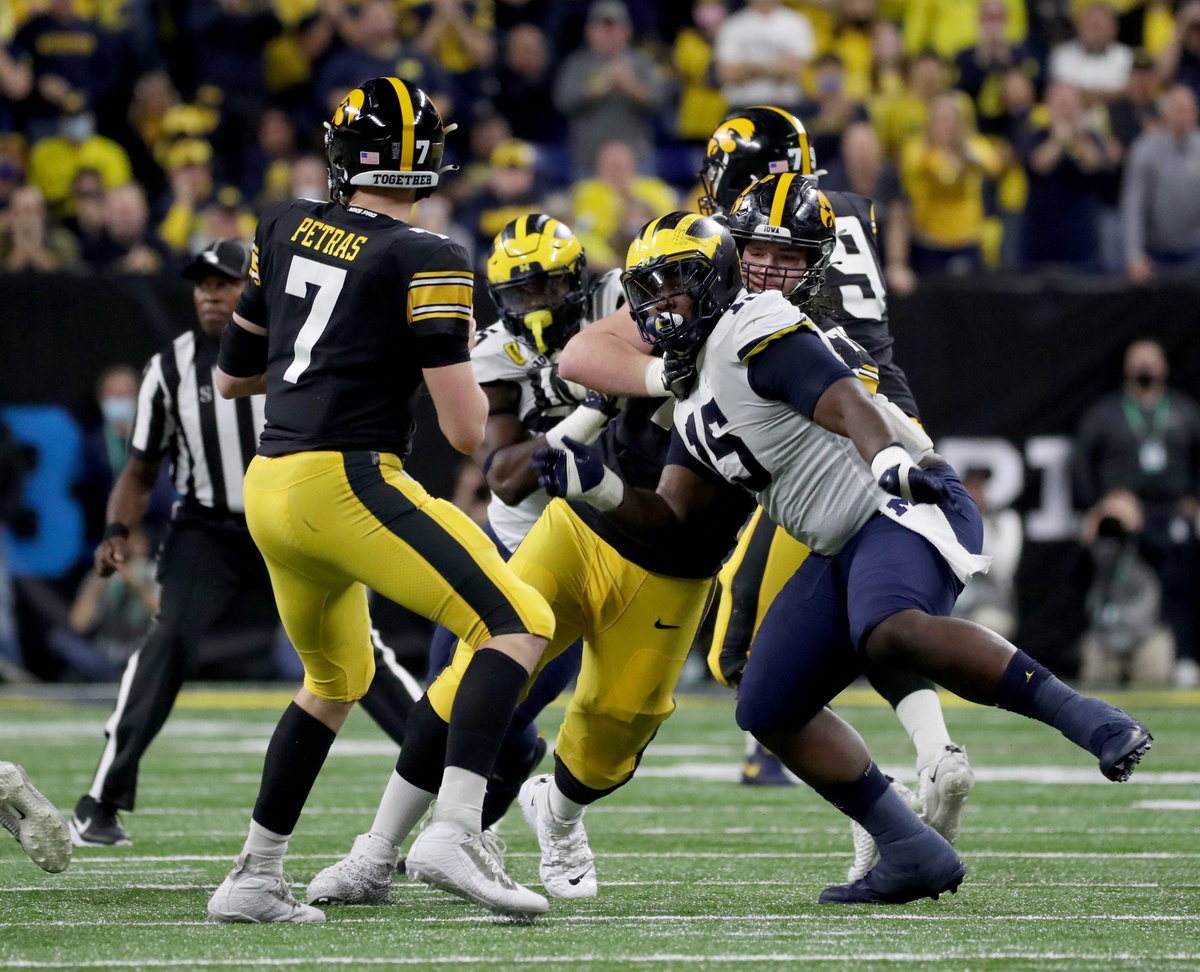 Hinton is fairly nimble for a big-bodied defender and shows good body control for a player of his stature. His ability to stay underneath double teams to anchor and keep his center of gravity doesn’t suggest he can play in the A-gaps. I see the best flash of mobility with how he contorts while shedding blocks and working across face.

Michigan defensive tackle Christopher Hinton projects as an early-down defender at the NFL level. I can appreciate his build and physical presence fitting on the defensive line and Michigan did take opportunities to align him in several spots along the front—serving as an odd front end, acting as a nose tackle on some pass-rush situations, and appearing in some subpackage rush groups. Obvious third-down situations prompted more substitutions and didn’t yield many opportunities for Hinton, which will ultimately devalue his perception in the 2022 NFL Draft. I don’t necessarily see a lot of upward mobility to unlock additional value in his game but I do consider him to be a high-floor, early-down player. Hinton leaves Michigan after a big jump in production this past season and is a relatively low-mileage defender despite serving as a starter in both 2020 and 2021. He looks to follow in his father’s footsteps—Christopher Hinton was the fourth overall pick in the 1983 NFL Draft who was an eight-time Pro Bowl offensive lineman. He started 172 games and sits in the Indianapolis Colts Ring of Honor.

First Step Explosiveness: Hinton flashes in this regard but I don’t think gap penetration is an area where he’s got a lot of upside. On opportunities as a rusher and when timing up the snap, I have seen him pressure quickly but his ability to consistently do so is not currently present—because of both his usage and down and distance opportunities.

Hand Counters: It appears as though length is a challenge and as a result, he needs to offer a wide variety of challenges to cleanly deconstruct blocks. He’s not a finished product here yet and his shedding when he can’t implement power to uncover gets compromised by increased blocking surface area. Precision and timeliness of counters will help.

Length: Hinton does not appear to have prototypical length. He’s built dense and his frame doesn’t do him any favors. I think he is best suited for a complementary role as an occupier up front as a result.

Hand Power: Hinton does offer a stiff punch and has the ability to stalemate at first contact in one-on-one situations. Ensuring his strike timing is prompt and establishing the initial blow will go a long way in ensuring he gets full power in his stun. I think he can stand to have more authority in his shedding efforts when implementing hands.

Run Defending: Double teams have given him trouble but I think he can improve his anchor skills, and in one-on-one situations, he’s got plenty of raw strength and density to hold the point. He’s done well with shedding when the ball is run off either hip and getting off blocks quick enough to help wrap and contain. He shows good flow and pursuit laterally, offering admirable effort in this regard.

Effort (Motor): Michigan did well to keep him fresh and I saw him consistently giving urgent rally to the football. He’s gotten outside the numbers on QB scrambles in an effort to try to contain. His range is sufficient but he makes the most of his athleticism with hustle. I would, however, like to see more fight at the point of attack or urgency to drop to a knee and anchor versus vertical push.

Lateral Mobility: The mobility component of Hinton is a nice surprise. He can scrape down the line of scrimmage while engaged with blockers who don’t gain a seal angle on his frame. His short-area quickness and ability to flash across a blocker are irregular, but I have seen him dial up a winning first step in urgent down and distances and in short-yardage.

Core/Functional Strength: I feel like there’s some room for improvement from Hinton in this regard because he’s clearly well built and has a dense frame that should offer ample anchor skills. Continued focus on prepping for double teams and focus on his anchor should provide him with the tools to hold the point of attack versus two blockers. His raw power appears to be good.

Versatility: Hinton has been charged with predominantly early-down reps at Michigan and I’d expect the same in the NFL. He’s got modest appeal as a rusher but his ideal landing spot is one that will not have a lot of room for his skill set on 3rd-and-long.