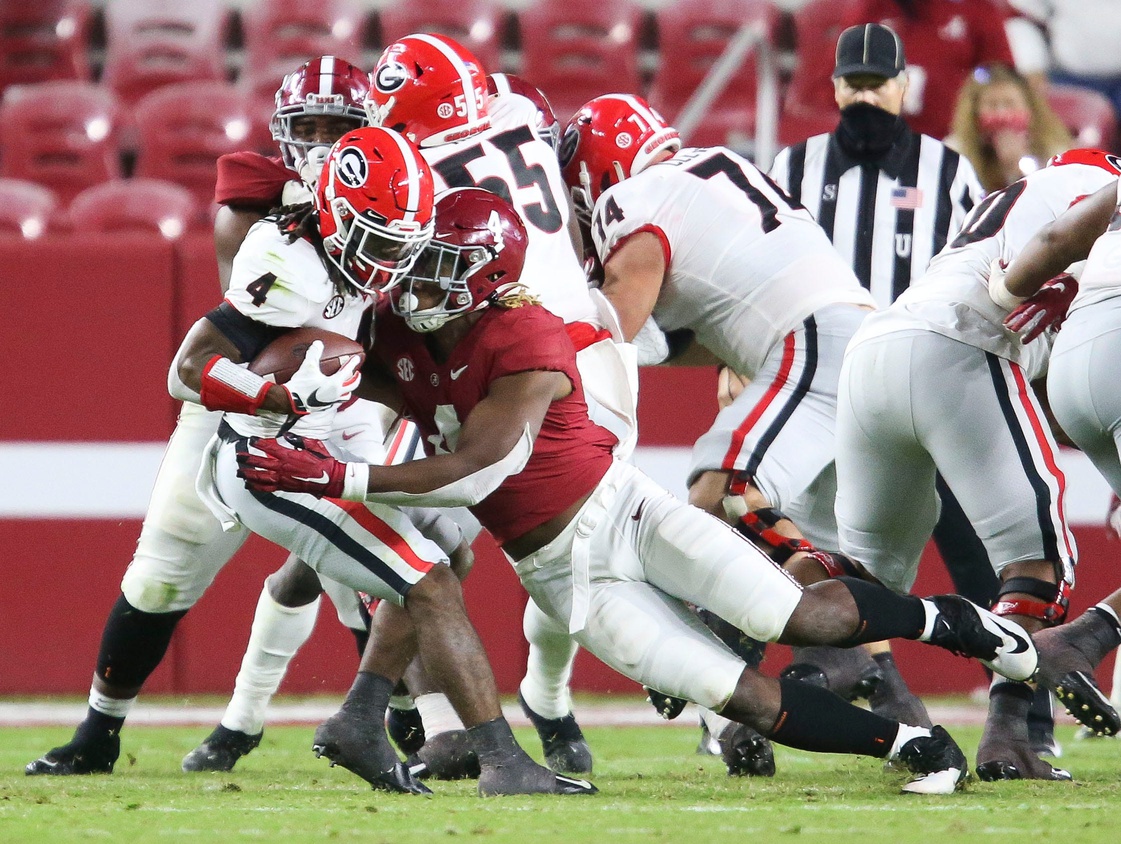 Allen’s length shows up in multiple forms when attacking offensive linemen. He creates separation with full extension. By maintaining this separation, he does allow the OL to vacuum and reel him into a controlling stalemate. His length allows him to throw multiple punches as he works upfield.

Alabama edge defender Christopher Allen projects as a potential starting hybrid defender at the next level. He is a natural fit for a 3-4 defense at outside linebacker, allowing him to set hard edges against the run and pinning his ears back to rush opposing quarterbacks. His arm length paired with a powerful frame creates issues for tackles that struggle with bull rushers. Allen works out of a two and three-point stance depending on the situation. His ability to stack, peek, and shed blocks make him a menace on early downs. He’s a high-effort defender that has a motor that never stops. Opposing quarterbacks cannot be complacent waiting on routes downfield to uncover from tight coverage because Allen’s pursuit is non-stop. Improving his rush maneuvers will be beneficial to his development against NFL offensive tackles. Nick Saban moved him on both sides of the formation working as the boundary and field edge defender. In a pinch, he can spot drop in the flats for zone coverage, but stray away from man coverage. He is at his best triggering downhill with full force and power to shock his opponents with a backfield surge.

First Step Explosiveness: Allen lacks quick-twitch off the ball. He has a solid first step at the snap. Pair it with his snap timing, he does a good job engaging with blocks in a timely fashion. He generates enough explosiveness and power to shock blockers.

Flexibility: There is a limitation to Allen’s flexibility and bend. He attacks OTs vertically but tends to shoot up out of his stance. When running the arc to rush opposing quarterbacks, he will flatten his path and secure the sack. When watching him, you will see solid ankle flexion to turn and bend around blocks. There is some hip tightness to consider also.

Hand Counters: Allen’s moves are a work in progress. He executes the half-man technique well, by stabbing the center of the OT’s chest to control their momentum and balance. Uses a stab/chop combo to quickly win around the edge and also a powerful two-hand bullrush to drive OTs backward and collapse the edges. He will benefit from adding more to his arsenal to work inside when the outside path has been cut off.

Hand Power: Allen is a heavy-handed puncher. His punches land with power to affect the OL’s balance. If the OL is able to latch, Allen grips and lifts their wrists to detach from blocks. He generates very good knock-back power to drive his opponents off their spot.

Run Defending: A hard edge setter, Allen flashes to funnel RBs back inside to his help. Against pulling guards, he meets them with a powerful shoulder to halt their momentum and blow up the designed run path. His long arms allow him to stack/lock-out, peek, and shed blocks. He locates the ball-carrier before making his move to disengage.

Effort(Motor): Allen plays with a ridiculous amount of effort and a hot motor. He is consistently firing off counter punches paired with his leg drive to work toward the football. The fight he displays on every play is infectious. Some of his sacks in 2020 where a result of non-stop effort. Even when his first move does not land or win, he continues to attack until he reaches his desired position.

Football IQ: Quickly identifies run or pass. Allen understands weight distribution and plans his attack off of it. When rushing the passer, he is aware of when to stop his rush and play the passing lanes. He identifies pullers for kick out and seal blocks. I would like to see a better feel for peel-back blocks.

Lateral Mobility: I would like to see more fluidity in his hips to be effective in coverage when asked to drop. He drops with an upright posture and little hip or knee bend. He lacks reactive quickness when plays change direction. He chases plays with patience to avoid overrunning.

Versatility: Allen aligned as the boundary and field defender at the end of the defensive line. His physical power and length offer opportunities as a stand-up rusher ahead of opposing guards. His effort, blocking shedding, and tackling would be impactful on special teams.