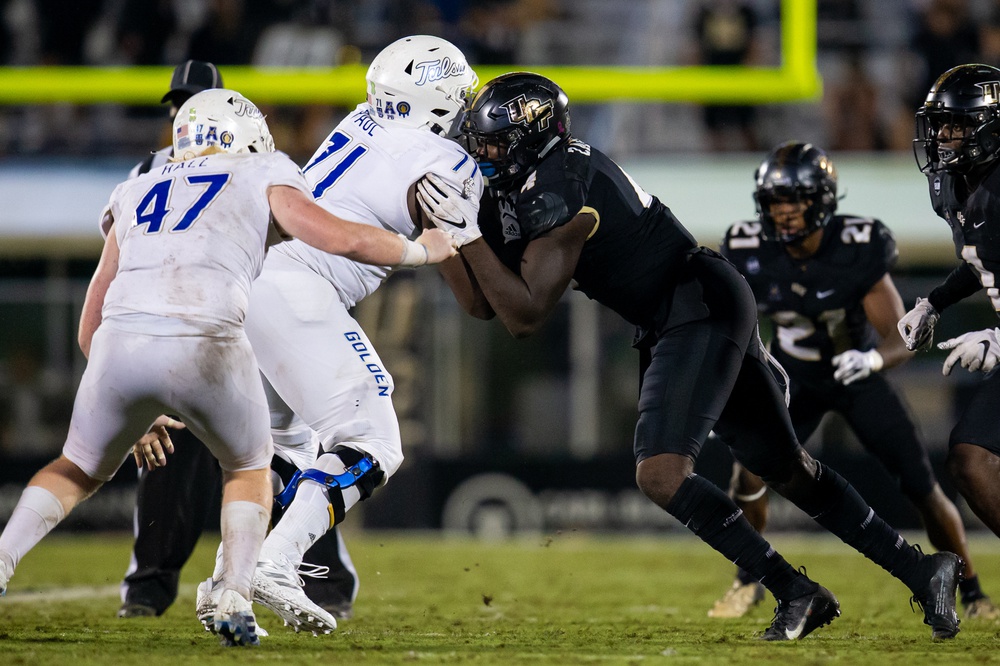 Paul is a technician with his hands, which helps maximize his anatomical length. He uses his length effectively to steer pass rushers beyond the peak of the pocket by finding surface area and playing with full extension, even when his feet lag behind.

Paul’s hand usage is among my favorite components of his game. He does well to place and fit his hands in the run game to take control of reps. In pass protection, his hands are well-placed and timed. I like his ability to re-fit his hands when necessary and vary his strikes.

Paul has sufficient power at the point of attack and holds his own. With that said, he has to find more consistent leverage to truly maximize his ability to remain stout in pass protection and create movement in the run game. His grip strength is excellent.

Chris Paul was a four-year starter for the Tulsa offensive line and enjoyed an accomplished career on and off the field. Paul is a musical artist and produced an EP in 2020 under the stage name The Seventh. Of Nigerian descent, Paul took an active role in various groups that promote racial equality. His volunteer efforts also extend to the Black Men’s Initiative, Future Alumni Council, University Ambassadors, Student Association, and Fellowship of Christian Athletes. His younger brother plays football at Houston while his oldest played at Northeastern State. Paul is an academic standout that is currently working on his MBA. Across his four seasons of starting experience for the Golden Hurricane, Paul spent two seasons at guard and two at tackle. I believe his best position in the NFL comes at guard, where my concerns about pass sets, lateral mobility, and weight distribution are eased. Paul is a technician with his hands and does well to vary his strikes and activate them with good timing and placement. He excels in the run game where his hands allow him to control reps and he does well to get his frame positioned to seal lanes. In pass protection, Paul is flashy but his tendency to overset and soften rush angles for his opponent must be corrected if he is tasked with playing on an island in the NFL. Paul will turn 24 during his rookie season in the NFL. I think he can provide depth with some positional flexibility. He has modest intrigue to develop into a reliable starter by year two or three.

Pass Sets: Paul has to find more consistency with his pass sets to survive as an offensive tackle in the NFL. He has a tendency to overset and expose the B-gap and he struggles to redirect. He needs to take better angles with his initial steps to cut off the outside edge track and set those roadblocks but has to be careful to not open his shoulders/hips and soften that angle for the pass rusher.

Competitive Toughness: Paul is a competitive blocker but falls short of earning labels like “nasty” and “mauler.” He has good temperament in the run game and battles in pass protection, even when his technique fails him.

Lateral Mobility: I’m concerned about Paul’s ability to slide his feet and redirect. His lateral mobility is only modest and could be a leading factor as to why he needs to play offensive guard in the NFL. I’m not fully convinced his issues are because he lacks foot quickness but more because of inconsistent pass sets and weight distribution within them.

Football IQ: Paul doesn’t overly impress with his ability to diagnose pressure packages and I’ve seen him let the inside rusher free with no threat to the outside. There is a bit of a robotic feel to him in pass protection. I do like his timing and executing in the run game as it relates to angles, body position, and hand fits.

Anchor Ability: Paul has sufficient functional strength but setting a consistently firm anchor can be challenging due to his high hips. He has a tendency to play tall in his pass sets and needs to more consistently win the leverage battle. It wasn’t a major issue in college but bigger tests are coming and I don’t believe he has natural knee bend.

Power at POA: See Above

Versatility: Paul has two years of starting experience at right tackle, one at left guard, and one at right guard. I believe his best spot at the next level is guard, where my concerns about pass sets are mitigated. I don’t believe he is a player that restricts the scheme when playing on the interior.