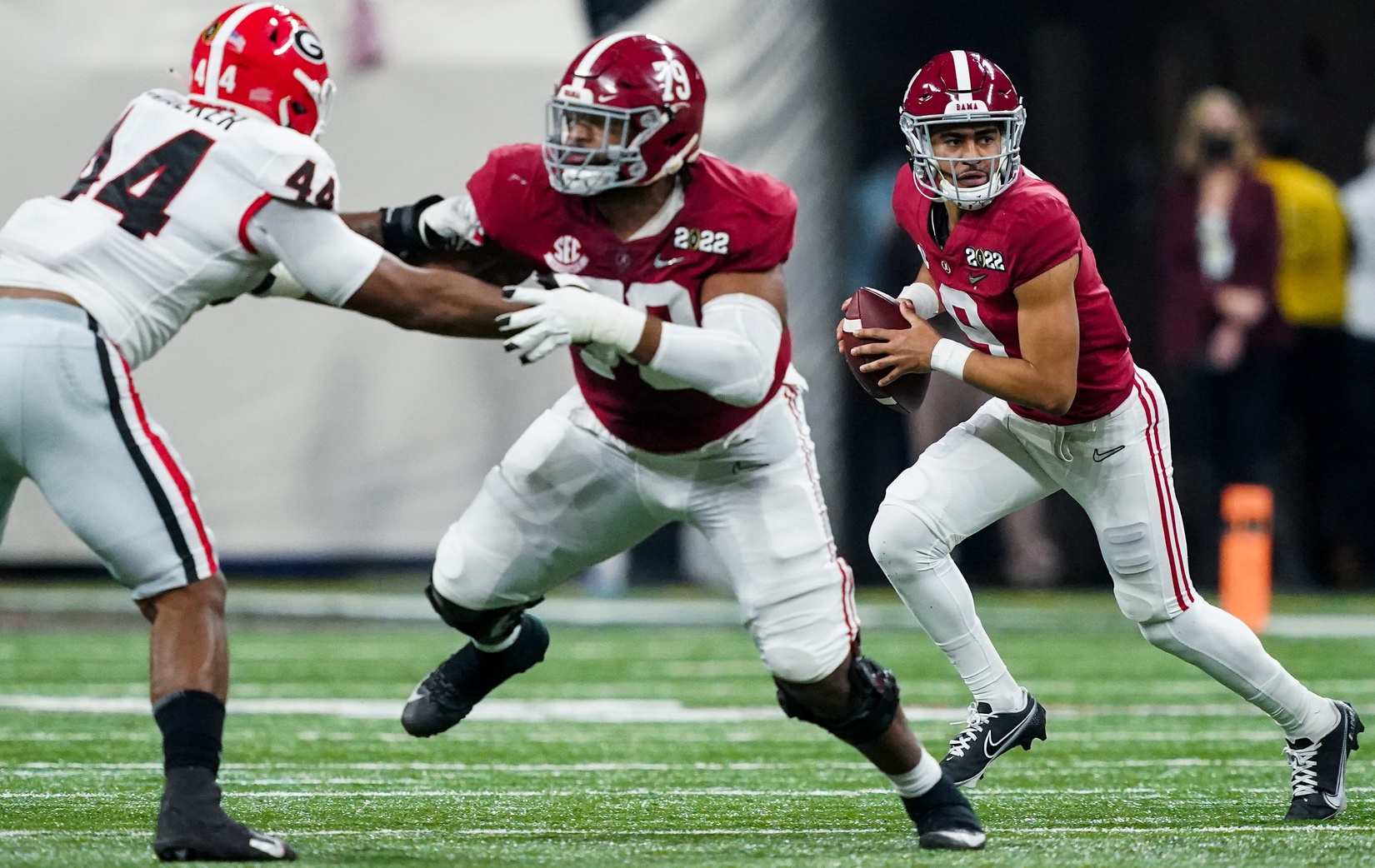 Owens’ base possesses good functional strength. He can absorb contact and pop from punches before anchoring down. Once his feet are planted or rooted, he is difficult to move and uproot. The inconsistent hand placement showed issues sustaining blocks due to losing pad level and leverage—small technical details that can really change his performance.

Alabama right tackle Chris Owens has worn different hats along the offensive line. Owens assumed the backup position at center, guard, and tackle. After starting as a reserve, he became a starter at the beginning of the 2019 season. This versatility bodes well for finding a place on an NFL roster. Owens is a powerful and stout offensive lineman. He’s at his best when triggering vertically in the run game. He will displace defenders and open lanes for his running backs. His strong latching ability allows him to turn and seal defenders. He has a solid kick slide in pass sets, but struggles with agile and twitchy rushers. As a result, Owens projects best as a guard where he is battling in a phone booth instead of on an island in space. He has a few technical errors to correct that will help his transition at either OL position. He strikes his opponents with wide hands outside of their frame. His hands land on the outer shoulder pads—this can result in penalties in the NFL. His punch timing can be late and quicker rushers counter easily. Owens can develop into a starting guard and operate as a swing tackle.

Balance: Owens has a thick, solid frame from top to bottom. His balance is hit or miss in terms of consistency and efficiency. His footwork and base are areas of concern. Against speed rushers, he overcompensates with steps leading to improper weight distribution. When rushers threaten with quick inside/out counters, he drops his weight on the inside leg, forcing him to bend at the waist and shoot his hands as a last result.

Pass Sets: Owens has a decent spring out of the blocks. Typically operating out of a two-point stance, his chest and shoulders can be set back a little further for better posturing. His kick-slide is effective to cover the outside path. His best reps are seen against less dynamic rushers. He beats them to the landmark and meets them with his initial punch. Redirecting his lower half to mirror agile rushers is where concerns form. His movements are not dynamic and once he commits to a path, it is difficult for him to change course.

Competitive Toughness: When watching him, I loved how hard he competed. The desire to keep his quarterback clean is strong. Even when he is beaten initially, Owens will work to recover with maximum effort to give the rusher one final punch, hoping to throw them off their path. In the run game, he battles in the tight spaces with strength and physicality to spring his running backs to daylight.

Lateral Mobility: His kick-slide is predicated on quickness at the snap to gain an advantage on his rusher. When his feet are under control, he shows solid ability to cut off the backside defender in the ground game. His reach blocks are average and he does not show the quickness to step across the DL’s frame and turn his body to complete a full seal block.

Length: Owen showcases pretty good arm length for his height and weight. The problem has been that he does not fully utilize this with full extension and lock-out during engagements. His length allowed him to get hands on multiple blocks during twists and stunts.

Football IQ: From the waist up, Owens issues are more technical and mechanical. Yet, they are repetitive on tape. He shows poor hand placement and punch timing. He has lapses against blitz pickup and chooses the wrong defender, providing a quick, unimpeded lane to his quarterback. He fires off the ball with good snap timing in the run and passing game. He mostly does a good job passing off twists and stunts.

Hand Technique: The biggest area for improvement with Owens is his hand technique. I am a fan of his grip and latching ability. He showcases powerful hands to control, turn, and seal his opponents. The majority of the time, his hands land on the outer shoulder pads. He must close the gap tighter inside toward the chest plate. As a result, he allows opponents free access to his chest and his leverage evaporates depending on the rusher. In passing sets, his punch timing can be late forcing him to shoot his outside arm first. This makes him vulnerable to swipes, rips, or cross chops.

Power at POA: Owens displays a quick trigger in the run game followed by a strong pop on contact. He will wash a defender down the line or turn them to seal a kick-out block. Smaller edge rushers struggle to disengage or absorb his initial contact. Maintaining leverage remains key for Owens.

Versatility: The majority of his snaps have been taken at OT. Early in his career at Alabama, he served as a backup center, guard, and tackle. While graded as a tackle, I firmly believe his best chance in the NFL is at guard. He can play on the outside with some corrections to his techniques. His strength, frame, and limitations against agile speed rushers make him an ideal candidate to kick inside. My motto for offensive linemen is to let them attempt to play tackle and fail first.