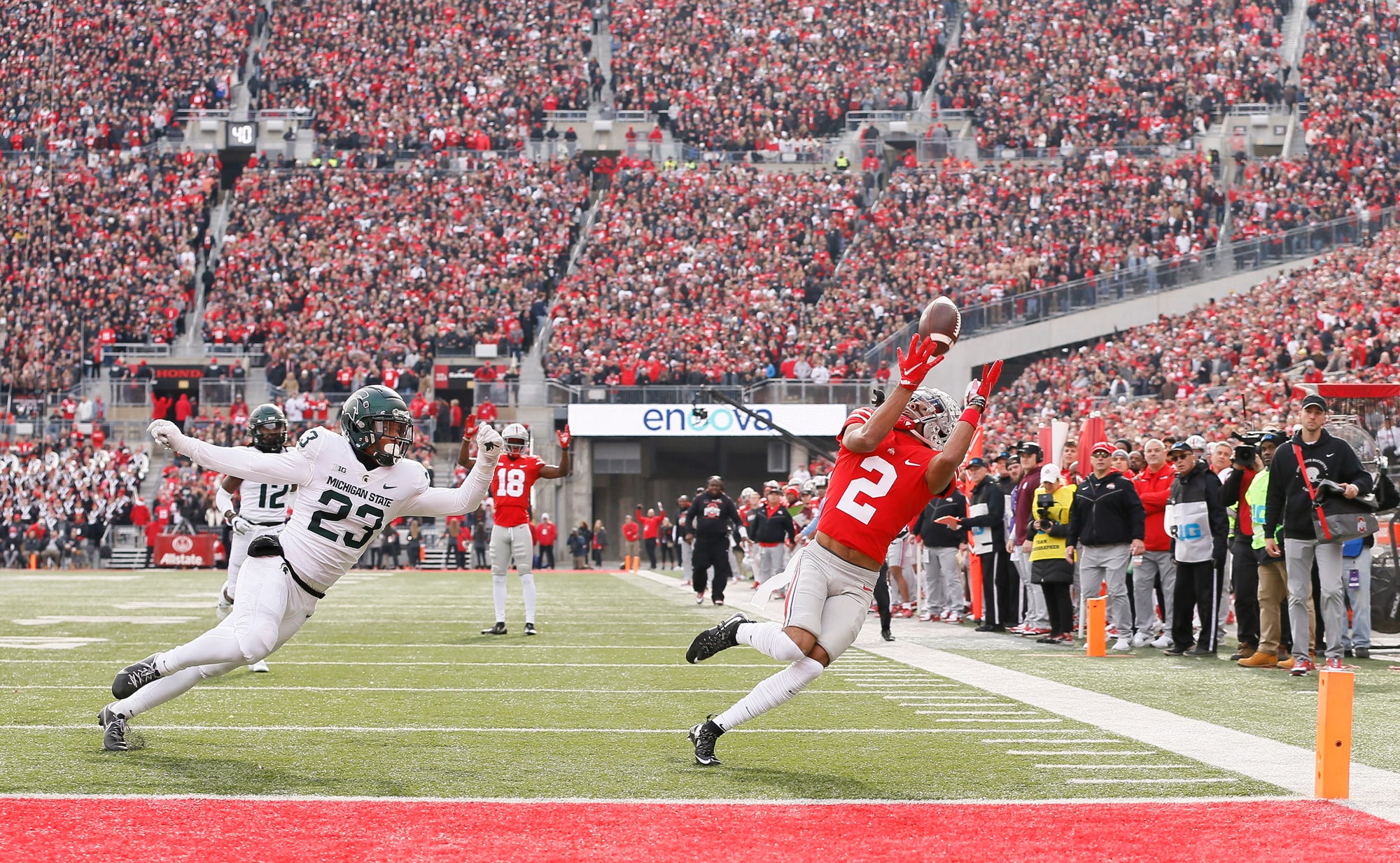 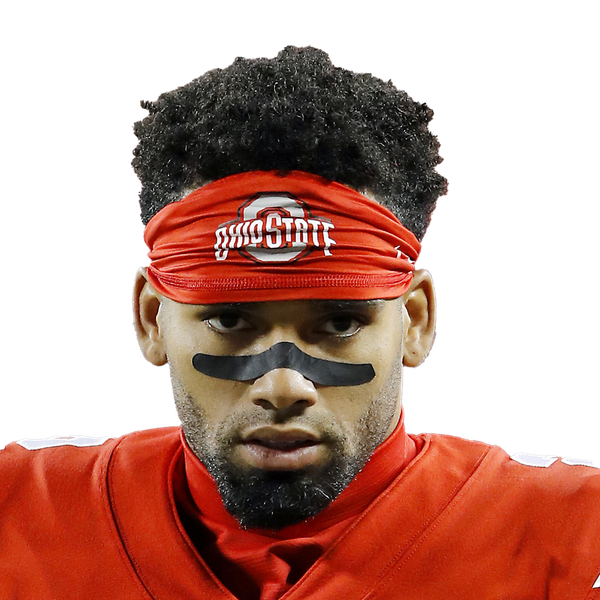 Olave is one of the better vertical receivers in this year's class and his open-field speed and ball tracking make him a threat any time you leave a single defender to cover the deep portions of the field.

Olave is an explosive play waiting to happen, thanks in large part to how Ohio State spaced the field and took their shots with double moves to the isolated side of the field. Any team that wants to do the same in the pros will have success too; he’ll force false steps and find room over the top. Olave averaged more than 15.5 yards per reception for his career. I wouldn’t endorse selling him exclusively on slants and asking him to break tackles in traffic to find the big play, however.

This is a savvy receiver who makes crafty plays on the ball in tight windows.

I’m impressed with Olave’s sideline awareness and ability to see the ball near the boundary and still feel where to get his feet down. He’s a master route salesman and should have little issue with translating to the pro game quickly—teams that need immediate impact players shouldn’t be shy. He played against some of the best of the best at the college level, including taking reps against superbly talented corners every day at practice at Ohio State.

Don't mistake him for "just a deep guy".

Olave should be considered one of the best route-runners in the 2022 NFL Draft. Whether he’s working on the hard-breaking routes back to the line of scrimmage, implementing double moves to work vertically, or working across the middle with deep over/cross patterns, Olave has the savvy in selling false breaks and taking winning angles to maximize his availability to the quarterback. He’s considered a three-level threat, and as a result, will have appeal to just about every offensive system in the league.

Ohio State wide receiver Chris Olave is one of college football’s most refined route-runners. A true route technician, Olave has illustrated high levels of football IQ and is the latest product of an Ohio State Buckeyes program that is churning out high-level prospects under the watch of wide receivers coach Brian Hartline.

Olave lacks the physical stature to be a dominant possession receiver in traffic and his worst moments do seem to come when contested or looking to high-point footballs in traffic, but an accurate passer will be able to feed him the football on schedule and allow Olave’s high-end separation skills to shine in the pro game. Olave took advantage of a higher market share of targets in 2020 and was the clear and obvious preferred target of quarterback Justin Fields in the passing game, alongside teammate Garrett Wilson. Those trends continued in 2021 with a young quarterback in C.J. Stroud taking over the offense and Olave has continued to shred opposing defenses on his way to setting the OSU career record for receiving touchdowns.

Olave’s route-running and releases will offer him a strong chance to translate to just about any passing system in the league—it will be more so a preference of whether or not Olave plays inside or outside depending on team-by-team preferences for measurables on the perimeter. Expectations for Olave should fall in line with some of the other successful rookies in recent years: an immediate impact player on his new team once he finds out his landing spot.

Hands: When he’s tasked with extending and catching the football away from his body, you’ll get some inconsistent results—especially when he’s involved in a collision at the catch point. You wish he had a little bit more “snatch” of the ball to his game, but he’s so often open and detached from coverage that it’s more often than not a non-issue. If the throw is on the body, the expectation should be a catch; he’s not someone who has concentration drops littered throughout his tape.

Separation: He creates easy separation thanks to hard sells on his route stems, patience to work away from his break and manipulate defensive backs, and also his burst and agility at the top of the route. He showcases strong footwork to gear down or roll through softer angles with pace and snap off his trajectory effectively. He’s found a lot of pitch-and-catch scenarios due to soft coverage courtesy of both the Buckeyes’ system and his own vertical dynamics.

Release Package: Olave has seen his fair share of clean releases, but when he is pressed at the line of scrimmage or threatened in the contact window, he’s been able to turn defenders inside out with lateral quickness and loose shoulders to get skinny through a jab step. Short-area acceleration accentuates these nuanced bits of his game and allows him to stack defenders quickly who do miss their collisions. Olave illustrates strong lateral quickness to dip across leveraged jams as well.

Run After Catch: There is plenty of upside to Olave’s RAC game when taking into consideration how well he sets up deeper patterns and how much separation he can craft in such instances. There’s not a great deal of imagination or eye-popping jukes in his game once he’s established the ball in his hands, but he’ll win foot races if he’s hit in stride. Don’t consider Olave a player who will play through contact or run through tackle challenges in the secondary. He’s a tough competitor but functional strength isn’t a hallmark of his game.

Ball Skills: Olave does well here when tracking the ball vertically down the field and adjusting his pace and trajectory to ensure he’s well-positioned to secure the catch. That said, his high-point skills are often negated when dealing with throws that pull him back into defenders and he’s not overly prone to finishing those repetitions. His catch radius when throws test him outside the frame is adequate.

Versatility: Olave has logged only one kick return and two punt returns over the course of his time in Columbus, so there’s not an established track record of special teams upside to bet on. That said, he did serve on the hands team and would be a worthwhile piece there in the pros as well. He’s quick and fluid enough to win from the slot but refined enough to win on the perimeter for teams that aren’t so steadfast on having a certain level of physicality on the outside.

Competitive Toughness: Olave’s functional strength could best be described as adequate. He’s not overly dominant in box-out situations nor when called upon as a playside run blocker—you’ll have more luck with having him run corners off the line of scrimmage and creating room that way. He’s a high-effort player and rarely, if ever, gives up on a ball.