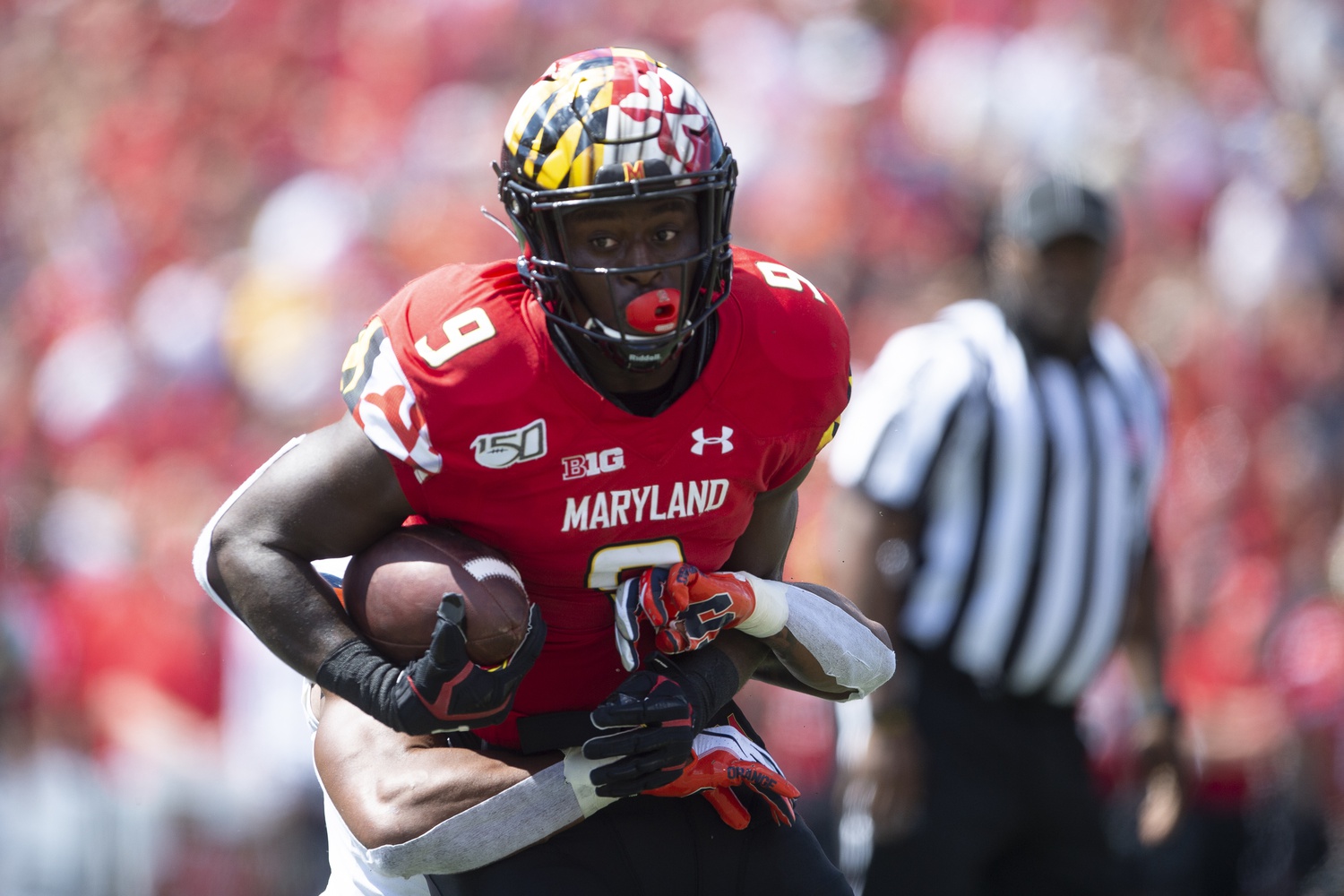 He is a height/weight/speed nightmare with really surprising bounce as a runner. He big-boy’d a number of Michigan defenders for a comedic, rumbling effort—looking like a man among boys underneath. He’s got good speed to break secondary angles in space, too.

Wingspan and hand strength are significant and give Okonkwo a very good catch radius to attack the football. His body contortion skills were best showcased in the flats as a dump-down target and in the screen game to adjust as necessary before transitioning upfield.

Watch the Michigan State (2021) contest for any questions about what he can do to create chunk plays. He logged a gouging touchdown up the seam for a long score but his other touchdown was more impressive; catching a short pass, turning up the far sideline, and hurdling a defender on his way to the end zone. His catch radius will allow him to have a hand to play in the red zone, too.

Maryland tight end Chigoziem Okonkwo is a physically impressive specimen who will move the needle for NFL teams looking to add strong receiving ability to the middle of the field. The Terrapins found a number of ways to get Okonkwo involved in the passing game, utilizing him up the seam, working as a slice target in the shallows, and even drawing up a number of TE screens for him in order to keep him as a constant threat. Okonkwo has high levels of run-after-catch upside as well and served as a punishing open-field runner who could stress you with both speed and power with the football. He’s still something of a work in progress as a blocker and I’m not certain he’s going to claim a high volume of snaps early on unless he goes to an offense that covets prioritizing his size as a target and is willing to forego involving him in the run game and in pass protection at all. Okonkwo missed the 2020 college season on account of myocarditis but made a triumphant return to the field and enjoyed a career season in just about every facet in 2021, finishing as the team’s second-leading receiver (52 receptions) and tied for the team lead in receiving touchdowns (5).

Hands: Some of his ball adjustments really pop. He did a good job securing the ball away from his frame and appears to be a natural hands-catcher. Saw little reason in the games watched that he would have issues finishing in contested situations, either.

Route Running: I’ve seen him release from detached alignments, in-line, and while in motion or in the backfield. He’s done well to feel green grass to gear down and create space against zone and he showcases good drive and burst at the top of his angular breaks to create some separation.

Versatility: Maryland used him in a number of roles. He was a split flow target in the passing game underneath but he ran corner routes and sit routes over the middle in mesh as well. He does need significant development if he isn’t going to be used as a backfield/slot target exclusively in the passing game.

Competitive Toughness: He’s a menace in the open field and I love how hard he runs with the rock. He’s got very good contact balance and will maximize his yardage with the ball in his hands. His functional strength is still developing but when you assess his frame he appears to still have room to grow and add weight; he’s got plenty of mass through the lower half and it gives you the impression he can continue to grow into his frame if needed to add more in-line power.

Blocking Skills: There is a good appetite for these opportunities but he’s just a bit raw. He doesn’t consistently use his hands to establish a fit and he doesn’t consistently sustain his blocks as a result. His base of support when trying to play with strength at the line can be compromised; David Ojabo pulled him off his base a number of times. He’s at his best as a slice and insert option.

Football IQ: I certainly wouldn’t consider Okonkwo a fully developed product and that makes for some excitement in his game and draft profile. He feels to be just barely scratching the surface of what he’s physically capable of and I think he has a lot of room to grow as an all-around player at the position. As is, he’s currently a receiving-only target.

Pass Protection: Okonkwo hasn’t been utilized in this aspect with a great deal of frequency. He didn’t show a great sense of finding work on the instances where he was left unoccupied in protection, either. He’s far more effective releasing into space as a pass-catcher on passing downs.