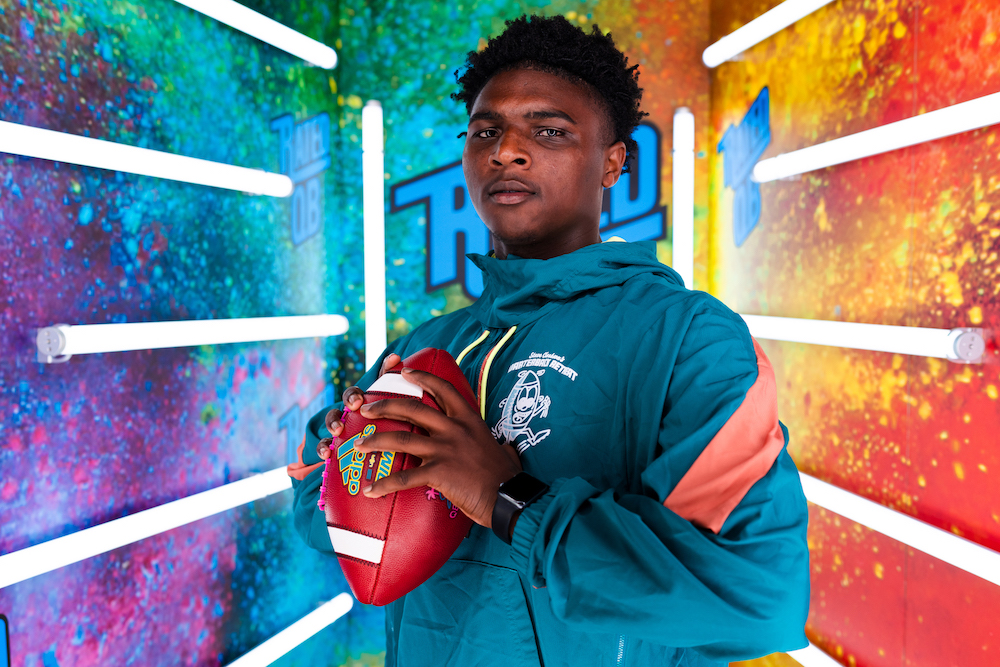 Pros: Man… the natural talent pops off the screen pretty quickly when you watch Cameron Ward throw the football. He’s got a snappy, whip release and generates a ton of natural velocity as a thrower when he’s targeting all levels of the field. You can see his ability to drop the arm slot as needed—he’s a creative thrower that invokes stylistically some of the same components you get from Patrick Mahomes. To be fair, that is a stylistic comparison and not a valuation or projection comparison! But Ward operates well outside of structure and made a living for Incarnate Word with a poor offensive line that constantly had him running for his life and trying to navigate the rush. The Cardinals’ offense featured a lot of screen throws, RPOs, and quick targets against free access to get the ball quickly to the perimeter and I thought the ball-handling skills Ward put on display really popped in a big way. His ability to quickly get out of the mesh point and shoot the ball with accuracy allowed him to manipulate edge defenders and second-level defenders effectively, pulling open throwing windows on the second level and stressing zones. Ward’s ability to throw on the run, paired with his actual mobility, gives him a lot of options to tap into as a passer and he’ll put you into coverage conflicts with how he can get outside the pocket or actually take off and convert. I thought he did some of his best work in big moments, too. The first round of the FCS Playoffs in 2021 saw two fourth-down conversions on the final drive of regulation to tie the game: a 4th-and-long run with his legs and a 4th-and-short in the low red zone that was put into the end zone to tie the game. Rising to the occasion, especially in instances like those against Stephen F. Austin where he was under constant pressure, shouldn’t be overlooked. Finally, I think there’s a fair amount of upside to tap into here as well. Two years at the FCS level won’t have you ready for the pro game and there are lots of fundamental tweaks he can impose to boost his game, but Ward was also a Wing-T quarterback in college—he’s only recently started getting reps as a traditional passer.

Cons: For as promising as the foundation is, I do think there are a lot of things that need to start being stacked on top of one another for Cameron Ward to turn the corner and become the quarterback he’s capable of being. He can be a little toesy in the pocket, which can add variance to his accuracy as he isn’t fully secure in his lower-half mechanics and alignment as he comes to balance on targets. Additionally, he appears to rely on his whip release a little too often at times—I think he would benefit from more consistent ground-up recruitment to generate torque and tighten his delivery in general. The free-wielding style works for him now but as the level of competition grows and he needs to be more consistently pinpoint accurate, this would go a long way in cutting down on his spray chart. I thought he showcased some bright flashes of anticipation with hard-breaking routes but there aren’t enough of them on tape, especially at the FCS level. That’s more of a challenge of scouting him within the offensive system than it is a true missing layer of his game. However, as someone who has a significant developmental curve needed in general, not having those opportunities consistently on hand does create some uncertainty about projecting him to the FBS level, let alone the NFL. I also thought that the UIW offense was a little messy procedurally as well. There were some mistimed snaps, some false starts, etc. that seemed a little too prevalent. Ward, as the quarterback, tightening up the ship for his teammates as he continues to mature will be something I’m looking for as well. This includes protection calls and understanding pressure situations, as I thought Ward was caught off guard by pressure and didn’t necessarily have the answers post-snap based off of pre-snap looks that I was hoping for. This should come with time and reps, but how his college system bakes those answers in versus the NFL could be a sticking point for readiness to play quickly.