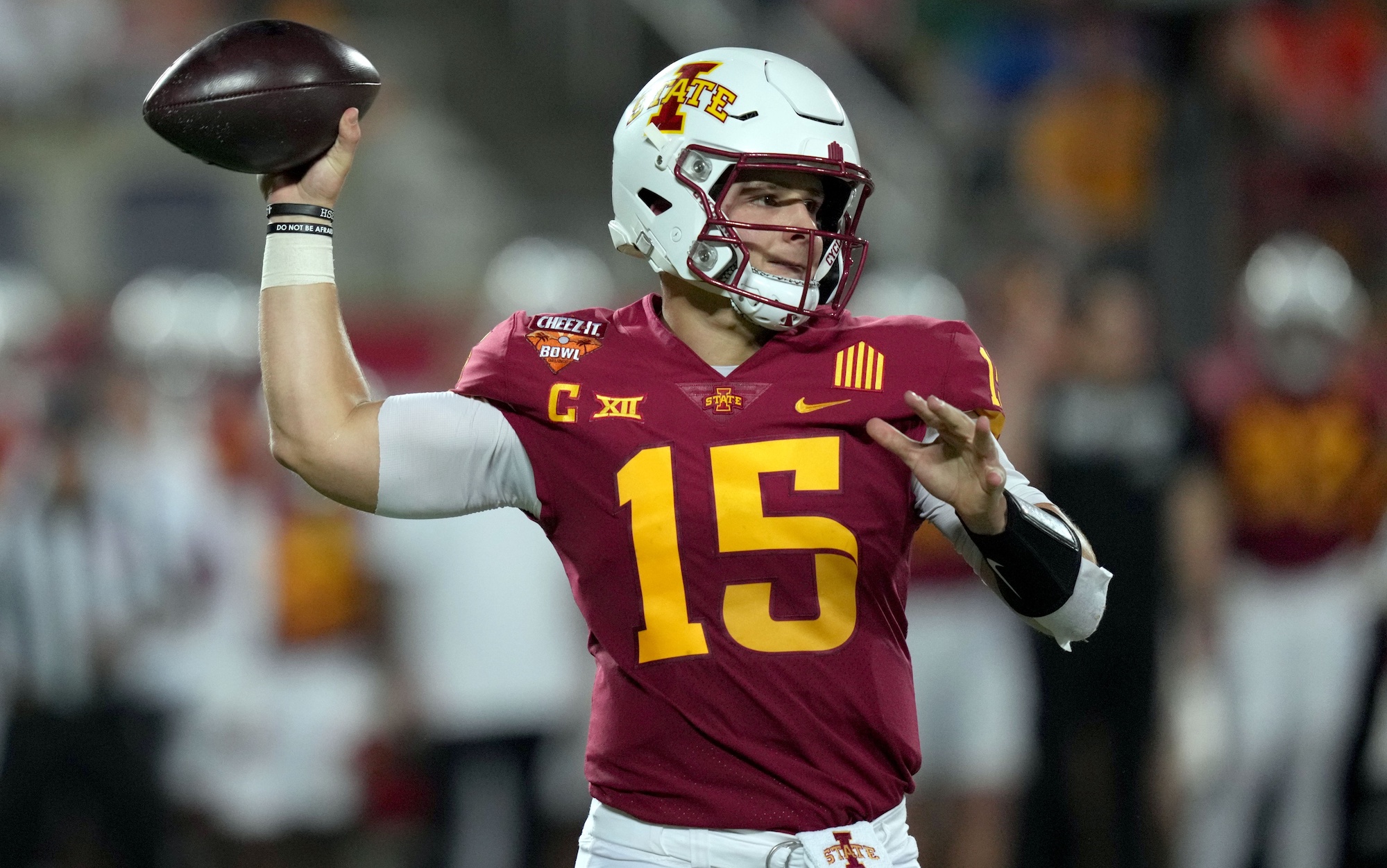 Purdy makes the best decisions when he has a clean pocket and a clear option to throw the ball to. Purdy is also effective when he can escape out of the pocket and give himself a clear picture of where his receivers are. When the pocket becomes crowded and he can’t escape, Purdy has a habit of rushing his throws, resulting in an interception.

Purdy’s leadership is consistent with that of an average starting college quarterback. Purdy plays with some high-level talent such as running back Breece Hall and wide receiver Xavier Hutchinson and he does a great job managing the ball distribution. Purdy plays the game with passion and grit.

Brock Purdy has put together a stellar NFL resume that started in 2018 when he was named the starter midway into his freshman season. Since 2018, Purdy has received several awards including Big 12 True Freshman of the Year (2018), Manning Award Semifinalist (2020), Davey O’Brien Award Semifinalist (2019, 2020), and First Team All-Big 12 (2020). Purdy excels at getting rid of the ball quickly to receivers that are in his first progression. Purdy is also athletic enough to keep the ball on a QB option play to pick up first downs. The area that Purdy struggles is in the deeper portion of the field, where his lack of true arm strength prevents him from consistently being able to get the ball to his receivers. In the NFL, Purdy is a prospect that will be best steved in an offense that doesn’t have to push the ball vertically, but an offense that would rather the quarterback get the ball out of his hands quickly on short-to-intermediate routes.

Poise: Purdy does not respond well to pressure. His first reaction to pressure is to escape the pocket and attempt to pick up yardage with his feet. At times under pressure, Purdy will force an unwarranted pass into coverage that at best becomes an incomplete pass.

Progressions: Purdy operates in a progression-based offense that works all levels of the field. Purdy struggles to comfortably work through all of his progressions. In most situations, Purdy gets stuck on his first option, and if that receiver isn’t open he instantly looks for his check-down.

Release: Purdy’s release can use some improvement. In the pocket, Purdy holds the ball low which means that at the time of his decision to throw, he has to first raise the ball and then release it. This affects him when trying to throw timing routes, often making the ball arrive late to the receiver.

Pocket Manipulation: Purdy shows the ability to step up into the pocket to evade defenders, he is just inconsistent. Instead of working the pocket, Purdy would rather escape. It seems at times that Purdy’s lack of height affects his ability to see in the pocket, so he escapes to get a clear view of how the play is developing.

Arm Strength: Purdy’s arm strength limits him to only being able to accurately deliver passes to the short areas of the field. On intermediate throws such as outs or curls, Purdy can deliver the ball accurately but the velocity diminishes tremendously. In the deeper portion of the field, Purdy lacks the natural arm strength to throw an accurate pass 30-plus yards down the field.

Mobility: Purdy has enough mobility to pick up yardage when necessary. At Iowa State, he is asked to run QB powers or option plays where he keeps the ball and he can pick up a moderate amount of yardage. Purdy should be considered a player who is mobile but not a dual-threat QB.

Mechanics: Purdy’s lower-half mechanics need improvement. When he feels pressure, he has a habit of falling off throws and doesn’t step into the pocket. He fails to engage his hips so he can get the torque needed to throw a pass with good velocity on it. This issue leads to defenders having the time to recover out of breaks and break the pass up.