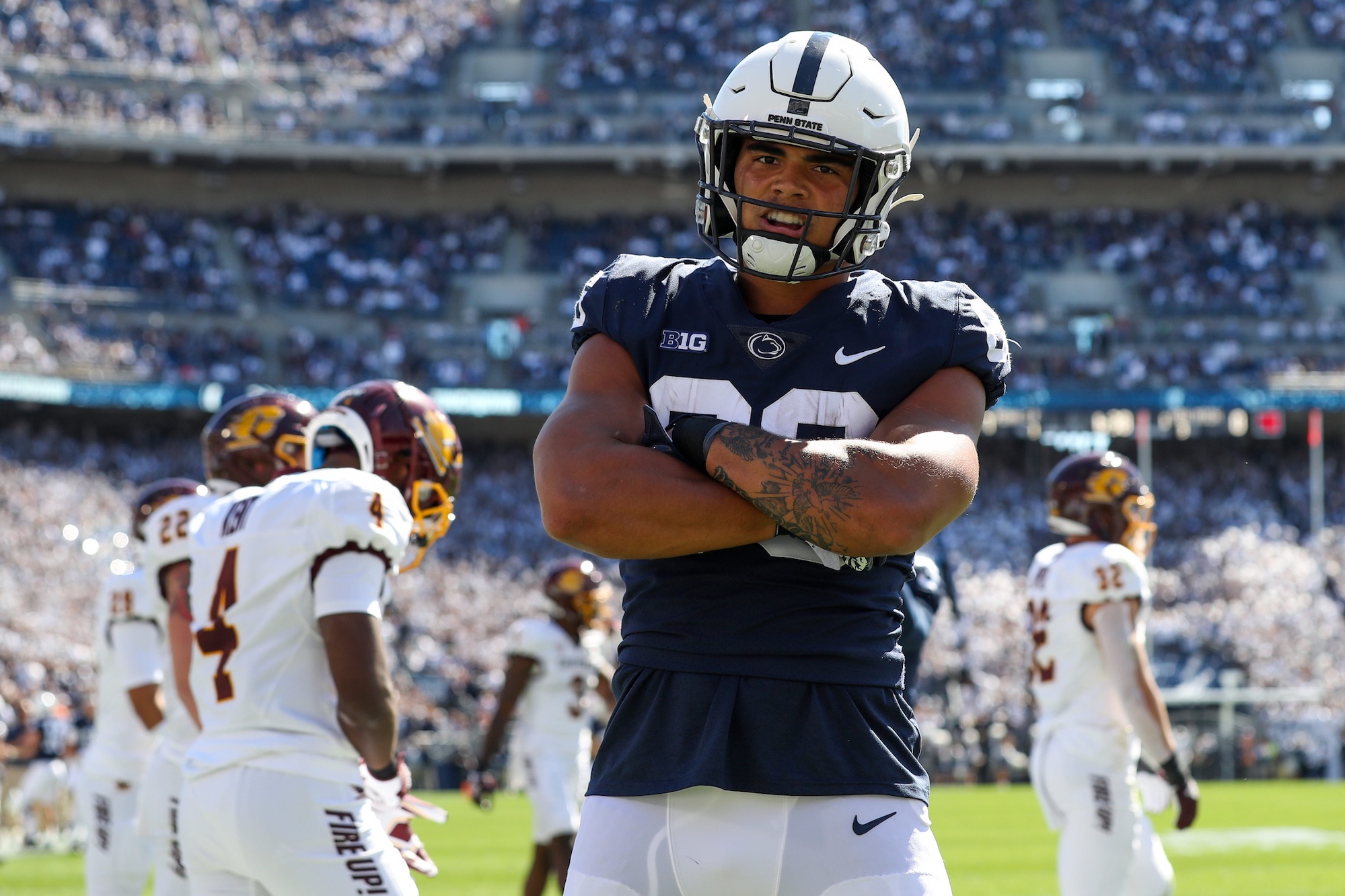 Pros: Holy cow. On a roster that features some incredibly gifted skill players, it is TE Brenton Strange who was able to make the biggest splash for PSU in the first month of the 2022 season. Size, athleticism, and balance are hallmark traits for Penn State’s emerging star tight end, who plays the position in a manner traditionalists will enjoy. This isn’t a flex TE—although he’s certainly athletic enough to handle such responsibilities and has illustrated the ability to win in space as a pass-catcher. He’s a true in-line player who has helped serve as a catalyst in the running game and the passing game alike, showing good drive block and leg drive ability once he’s secure on defenders at the point of attack. Penn State has used him in a variety of alignments as well—they don’t just sneak him into favorable route matchups but also provide angles in the running game. Some of their short-yardage packages from 2021 featured Strange in the backfield as a fullback. His hands are reliable but where he really shines is after the catch. Strange is a plus athlete but not a true mismatch athlete—yet he’s one of the hardest open-field tackles I’ve seen early in the 2022 college season. His contact balance, size, and toughness all shine in this regard—be it against Purdue on a tremendous effort to score on a long run after the catch or against Auburn to consistently create a missed tackle and find extra yards for his offense.

Cons: We’re still waiting to see a full season of featured play to get a firm grasp on what the floor and the ceiling are here. Brenton Strange has been largely rotated throughout the early chapters of his career, so I’m going to be patient with his evaluation as the season progresses. But he appears to have a lot of foundational traits in his game. His work in protection is effective but he certainly has room to improve with his strike, latch, and his angles to frame on the edge. His run game work hits big due to contact balance and power but I also think he’s a player who can continue to grow in first contact and winning the point of attack initially. It is worth noting that he’s had his most impactful games as a pass-catcher against the biggest competition: Ohio State, Auburn, and Michigan State. But you’d absolutely like to see a more consistent impact as a weapon receiving the football week to week, especially considering the early returns Penn State is collecting on this front early in the 2022 season. I’m not sure he’s got the second gear needed to truly break the same kinds of runs in the pros, but with that said, I’d imagine he’s still going to be an absolute unit and chore to tackle for NFL DBs.