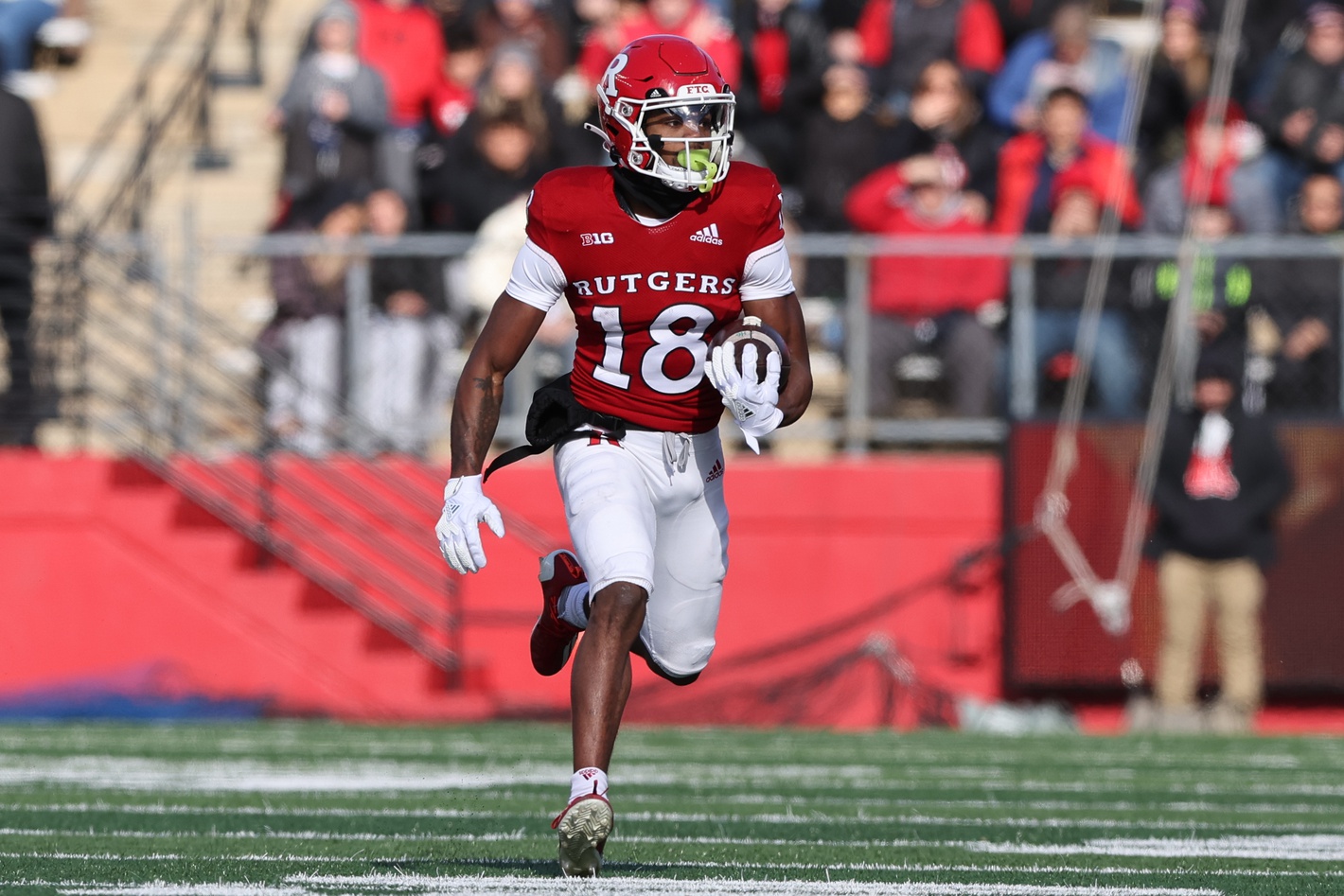 Melton has crafted some chunk plays in all phases; he did well against Wisconsin (2021) to take advantage of soft coverage in a man matchup against a safety to aggressively press his fade route and secure a play. Ohio State (2020) was a matchup that featured him on a throwback in the return game for a 58-yard score. He’s got good quickness, but finding ways to consistently get the ball safely into his hands is where the improvements are needed.

Natural instincts with the ball in his hands are a plus quality and it is worth acknowledging that he’s played nearly 60 games at the college level. The speed of the game, no matter what alignment or role he’s filling, doesn’t appear to be too much for him. But a lack of precision passing and timing in the Rutgers offense over the years leaves plenty of meat on the bone for becoming a more polished and deliberate player in the passing game.

Rutgers wide receiver Bo Melton projects as a possible specialist at the NFL level and appears to offer some upside as a depth presence in an NFL wide receiver room. Melton has posted consecutive 600+ yard receiving seasons for the Scarlet Knights over the last two seasons and has been someone who has been a priority to create manufactured touches for across that stretch of time. Melton has good initial quickness and acceleration and has flashed effective open-field vision in the quick game when he’s been able to successfully complete receptions underneath to find pathways for added yardage. A multi-year team captain with more than 40 starts in his career, Melton was named the 2021 MVP on offense and was the team leader in all-purpose yardage across touches as a receiver, rusher, and on both punt and kick returns. Rutgers football has been a family affair, as his brother Max is also on the team currently and their father, Gary, played for the Scarlet Knights from 1987-1991. Look for Melton in the late rounds as a team looks to secure a potential return specialist with upside to develop further into a receiver who could dress on gameday with time and patience.

Route Running: I did not see a lot of dynamic change of direction at the top of the route; I think there’s more separation ability to tap into if he can get sharper or more precise to explode out of his breaks. I saw him running a lot of vertical routes on the perimeter and I would love to see him honor the redline more to afford his quarterback a larger throwing window.

Hands: Hands-catcher when he’s square to the LOS or working back down the stem—he showcases effective ability to catch away from his body. That said, throws that test his catch radius outside of the chest plate have yielded some inconsistent results. Even though he’s had some impressive high-point receptions (Penn State, 2020), I don’t think contested throws are a staple of his game.

Separation: I have seen him run away from leverage on crossers and successfully stack with a speed release against bump and run. He’s allowed defenders to stay sticky on routes that break inside and he’s been squeezed into the boundary vertically.

Release Package: He’s worked both from the slot and on the perimeter in the passing game but I haven’t seen a lot of variance. I also, quite frankly, didn’t see a lot of press against him in the games I studied. This is an area where I feel like Melton has the physical skill set to develop and be effective, but without growth and expansion of these skills, he will need to play inside.

Run After Catch: This is one of Melton’s more natural skill sets. You watch him with the ball in his hands and he’s clearly got a second gear, he’s got good wiggle and his vision allows him to make the subtle adjustments on the fly to work to space. His contact balance is sufficient but I wouldn’t consider him a powerful runner by any means.

Ball Skills: I wish he was a little more effective outside of his frame. Yes, he’s gone high and made some spectacular leaping grabs, but I’ve also seen him short-arm an over-the-shoulder vertical shot and misplay a ball low and away along the sideline that would have been a tough but reasonable catch to make.

Versatility: I like Melton best with his stature and athletic profile as a developmental slot receiver and in the return game. For that reason alone, you can probably justify an active roster spot and hope that he becomes more developed as a receiver in order to truly fulfill two active roster spots as a viable receiver and special teams player.

Competitive Toughness: The slew of ways Melton has contributed to the Rutgers team is hard to ignore—he’s been a productive player through both special teams and on offense. He plays hard in the run game as well, although his functional strength and size aren’t enough to physically dominate corners on the outside. However, he will make you work to step through his challenges and he’s stepped down to seal on safeties when aligned with outside leverage.