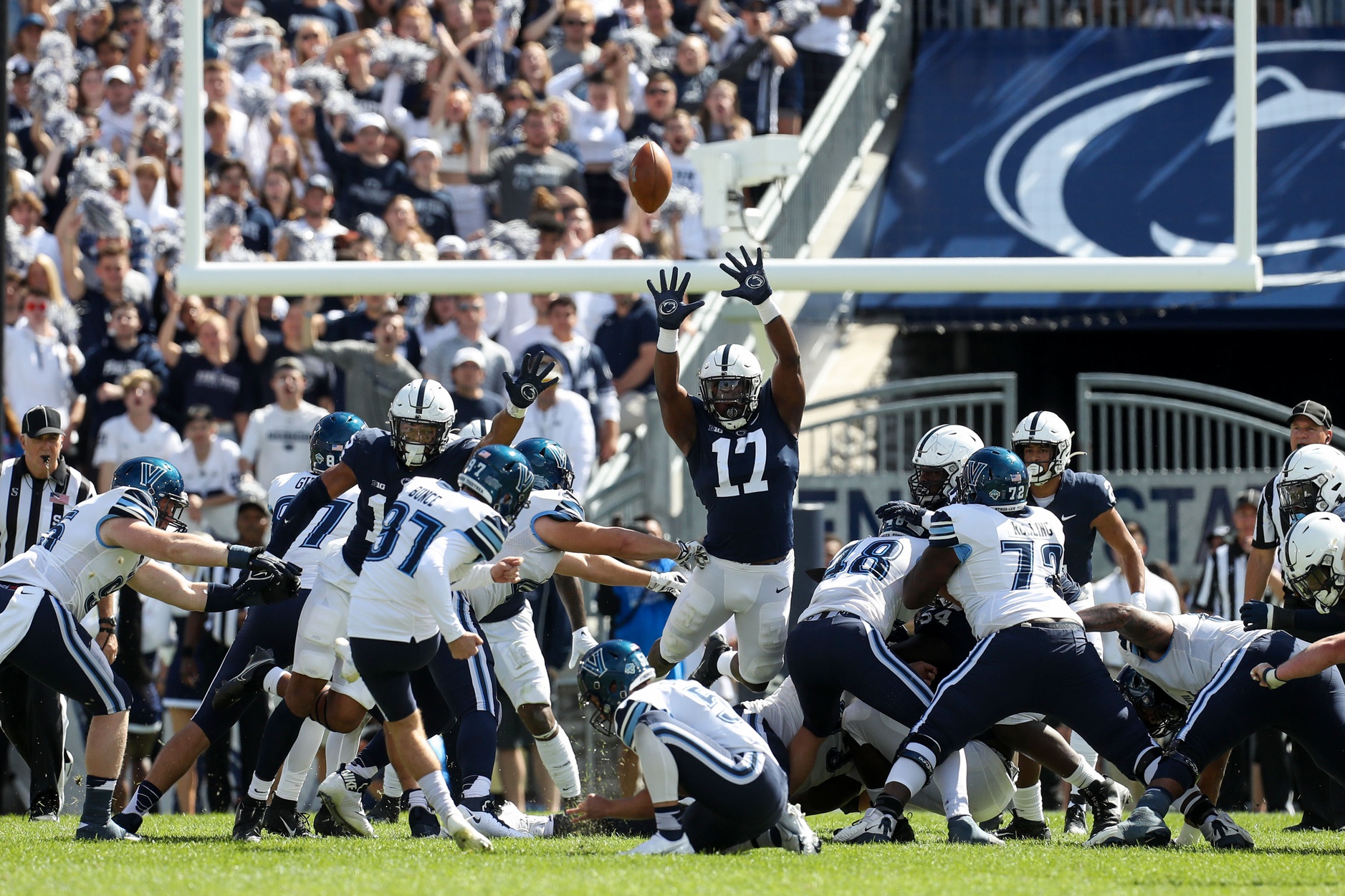 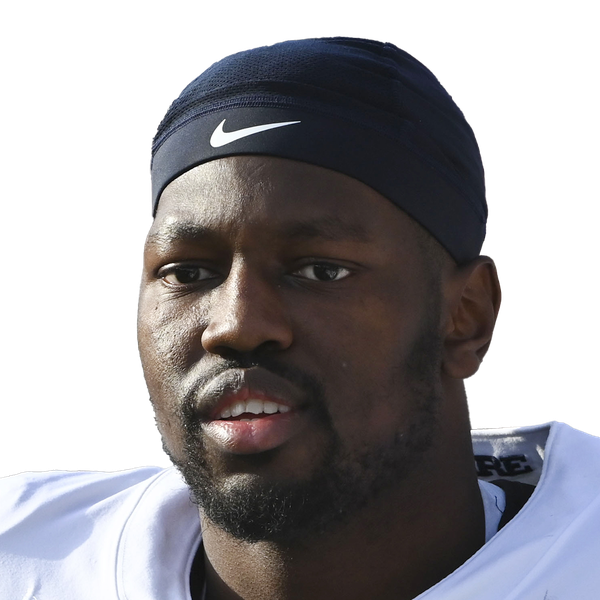 There are some instances in which he is simply overwhelming off of the edge. The drive and initial stem on his outside rushes puts tackles in high stress sets and he’s always going to loom as a threat to take the edge. I still think he can get more efficient here, too—I saw some instances where he was late to release on the snap and allowed his tackle to get a head start in gaining leverage on the rep.

His inside counters are allowed to succeed more thanks to his burst and step, but the accuracy of his hands in these situations to rip or swim through punches is effective nonetheless. His rushes outside are primarily rip and dip to duck the inside shoulder and I’ve seen a few power conversions as well to collapse when he’s got enough of a runway to build a few necessary steps. He’s not as dynamic when stacking the line of scrimmage, however, and I’m not overly sold on his upper-body power here to create room for clean disengagement as of this point.

Ebiketie is a plus athlete who must be accounted for on the blocking surface, even off the backside.

This is a fluid athlete who will have little issue flashing and reacting in space to redirect and protect the perimeter. He’s got the dynamic base to drive and get width quickly if you’re looking to option off of him.

Penn State EDGE defender Arnold Ebiketie offers enticing speed and twitch off the edge; he’s a prospect whose ability to claim wins with speed would be a welcomed addition to just about any defensive grouping in the NFL. Finding the right value for his skill set, however, is a bit more of a complicated proposition. Ebiketie has transitioned well in 2021 as a new member of the Nittany Lions’ defense, which will undoubtedly boost his perception after a modest tenure as a member of the Temple Owls program. Ebiketie nearly doubled his career totals in sacks and tackles for loss in 2021 on a Lions defense that has afforded a number of players with similar skill sets with prime opportunities to attack the backfield and encourages them to utilize that speed to attack up the field.

An NFL system will need to offer the same kind of approach to maximize his talents as he’s not overly effective as of this point in handling a more diverse and nuanced role in a defensive front; he didn’t negotiate blocks with the kind of consistency you’d like to see in the run game. Ebiketie’s measurables suggest he is capable of further growing into a full-time role, but this is a player who I think would benefit from a select menu of plays as a designated rush specialist in the early chapters of his pro career. Depending on where he lands, that may be his ceiling, too—although wide-9 structures will have more opportunities for him on early downs.

Flexibility: Ebiketie certainly has the ability to flatten at the top of the arc and his pliability as an athlete popped on numerous occasions to help him get low and run under the hands of tackles outside. He also showcases some admirable torque throughout his torso on rush counters to stay skinny and slip through creases.

Hand Counters: His inside counters are allowed to succeed more thanks to his burst and step, but the accuracy of his hands in these situations to rip or swim through punches is effective nonetheless. His rushes outside are primarily rip and dip to duck the inside shoulder and I’ve seen a few power conversions as well to collapse when he’s got enough of a runway to build a few necessary steps. He’s not as dynamic when stacking the line of scrimmage, however, and I’m not overly sold on his upper-body power here to create room for clean disengagement as of this point.

Length: Ebiketie’s anatomical length will check boxes for just about every team in the league, although his functional length doesn’t appear to be as effective as he measures. Too often he’ll let blockers into his body and I’ve seen a number of skill players effectively lock him out in both pass protection and in the run game. He’s got the tools to be more effective here but he’ll need to embrace the value in full extension and be more consistent in creating that room to work. He does, however, dictate punch timing to tackles at times to help set up his rush counters.

Hand Power: I thought his punch flashed the most on speed conversions to attack tackles in head-up instances to create push. In stun-punch situations, I didn’t see him consistently dictate terms and too often he was put in situations where he needed extra work to find his way clear of the block.

Run Defending: Penetration is where he’s going to win here. The initial quickness he illustrates is effective to beat blockers to landmarks and then his length and reactive athleticism can take over to allow him to mirror ball-carriers or press the mesh point. From this perspective, I do consider him to be a scheme-specific talent who will need either significant coaching to be more diverse or to be placed in situations where his get-off can create chaos. His point of attack skills against blockers is going to need better initial contact, better extension skills, and a more refined feel for holding ground before parlaying into pursuit.

Effort (Motor): Ebiketie plays with good flow, pursuit and secondary effort, which has allowed some of his production to come to fruition. Backside pursuit when left unblocked is excellent and he’s not someone you will be able to get away with leaving unaccounted for in the blocking surface. His ability to peel back and work into the pocket if he’s run past the arc is strong and quarterbacks need to be heady of his presence on an extended hold of the ball. I have an appreciation for how he will play through the whistle, even after he’s lost the initial exchange and needs to provide a lot more juice to find his way back to the ball.

Football IQ: I can appreciate that this is a scheme-specific talent who, in the right conditions, could feasibly garner success quickly with the marriage of opportunity, scheme, and complementary talent. Teams who call upon the front four to create chaos and have several other prominent players up front could free Ebiketie up for some splash plays quickly. But the more conservative projection is the one I’ll favor, which is that he’s going to need some seasoning to come into his own. I like his three-year projection much more than his one-year projection.

Versatility: He can certainly rush from either a two or three-point stance but I do think his overall role is one that is going to require him to play with wide angles to have run support leverage built into his alignments. Penn State did, on occasion, move him around the front and ask him to rush from interior angles;. I see no reason why he couldn’t find penetration as a looper in more exotic rush schemes; although such a situation could require him to be a rush specialist for his primary role and not as a three-down defender.