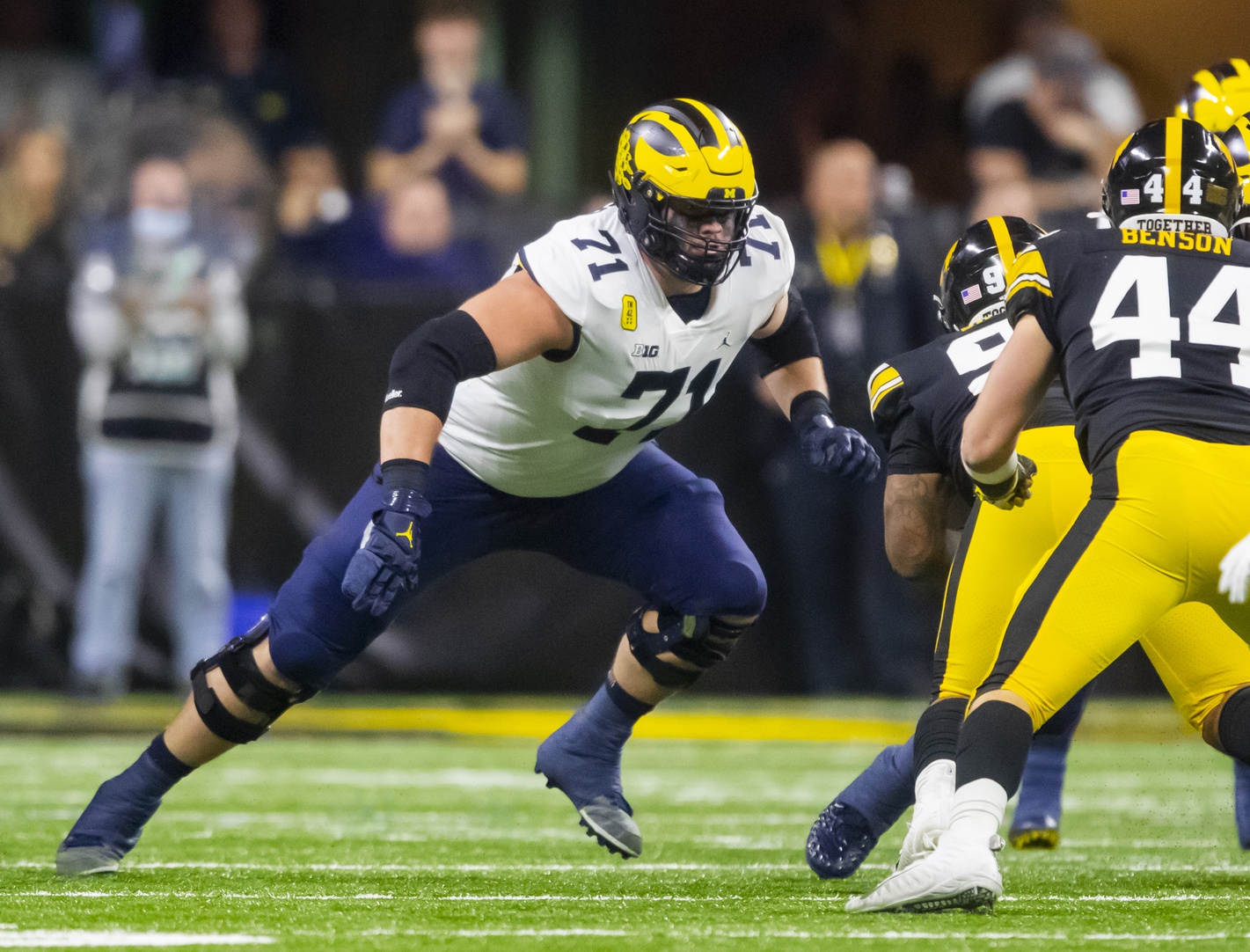 This is one of my favorite qualities about Stueber. His push and ability to reset the line of scrimmage holds value in just about every game situation: power runs, working in short-yardage, collapsing down the edge with a down block, or working off double teams. He’s got a lot of punch as he moves forward and has moved a number of bodies into a pileup if he’s able to establish momentum.

I absolutely love the surge he gets up front and the toughness he plays with as a drive blocker. He’s got ample push and tone-setting ability in the power run game and he’s persistent as a pass protector when left unoccupied by rushers. He’s a guy who plays a little chippy, which I’m absolutely here for, too.

Michigan offensive lineman Andrew Stueber has the physical demeanor and functional power to develop into a starting-caliber offensive lineman at the NFL level. There is likely to be some debate about Stueber’s value as an interior or outside blocker at the pro level, but with his long frame, I do think he’s best served to step into a role on the outside as an offensive tackle. Stueber isn’t the most fleet of foot to play on the edge, but he offers excellent length, very good power, and a savvy approach that allows him to process fronts and late motion effectively as a blocker in both the run game and as a pass protector. A brief stop at right guard for two games in an abbreviated 2020 season will feed the speculation to play Stueber inside, and at the very least that experience will aid his resume as being someone capable of accounting for depth at more than one spot on the line. It is worth mentioning that he suffered an ACL tear in 2019, costing him his entire season. He’s at his absolute best in short sets and when he’s asked to drive off the ball and reset the line of scrimmage. He’s old-school and a barroom brawler, which won’t be for everyone but makes him a great candidate to step into a run-heavy scheme and be given the chance to develop.

Balance: He’s only a modest athlete and therefore when you test his landmarks you will see issues with weight distribution and discipline. His ability to react to late flashing defenders is enough to get hands on, but expecting him to play with functional strength and reset his base is asking a lot of his movement skills and he may slide off the block as a result. I thought he offered good cadence in his set to allow him to absorb power sufficiently. I do think he’s built top-heavy and I wish a little more of his mass was spread into his lower half to allow him to easily take on power and sit on rushes.

Pass Sets: The ability to protect the edge is here but it comes with some concessions—most notably a very obvious run/pass key with his weight distribution at the snap in order to give him the drive out of his stance he needs to protect versus speed. He flips and carries to run outside rushers past their mark effectively and has a big enough strike zone to dictate hand timing outside. His angles are effective but I do think this is someone who would benefit from offering some help in obvious passing situations to help him corral speed—Michigan did that with chips from the back on occasion.

Lateral Mobility: This isn’t where Stueber is going to shine. He doesn’t have the crispest feet from an agility perspective and he lacks the spring to redirect with suddenness—you see some of his lapses as a blocker when rushers counter back inside or look to loop late and challenge him to get off his initial landmark. Scraping linebackers can challenge him in space if they feel him coming and adjust late to force him to redirect, so building anticipation on defensive flow will be a big help to cleaning up these challenges.

Length: There is definitely an offense tackle strike zone available here. Stueber has effective range with his hands and, just as important, has enough pop and power to neutralize rushers off the edge. I appreciate his efforts on horizontal runs or when trying to pick off linebackers in space to play with the full extension of his hands to maximize his reach and influence—even if he hasn’t sunk in the clamps.

Football IQ: I appreciate the awareness that Stueber plays with. He’s savvy to late shifts and unfazed by games inside, showcasing good patience to wait out the early eye candy. He’s a multi-year starter at Michigan and as a result, has been given plenty of reps against quality pass rushers and heavy-handed defenders who will play at the pro level. I do wish he had a little more understanding in real-time of how his athletic profile can be limited, particularly on the second level and in space. But it is worth noting on the instances in which he was asked to pull, he showed good fundamentals here, too.

Hand Technique: His hands are active and accurate. I appreciate his inside hand and the effective clamp he sets to protect himself inside. There are some good flashes on work to reset around the arc—he isn’t a complacent puncher who looks to grab and hold.

Anchor Ability: I don’t see him sitting down on a lot of rushes because he doesn’t necessarily have the hinges to play with a wide base, engage the lower half, and simply eat up the rusher. But he has plus functional strength as a whole and will force rushers to turn the corner and run the arc on him if he gets speed. Power rushers would be wise to challenge him late in the rep and then challenge him to redirect as compared to playing through his frame and working through his wheelhouse.

Versatility: I’m not sure I’d want him inside with consistency given his top-heavy frame, the length he provides, the modest lateral mobility, and his stature as a whole. But the fact that he’s at least done it for a stretch in 2020 and manned the right guard spot for two games is sure to add value to his perception. In an emergency situation, he’s got the needed reps to step inside.