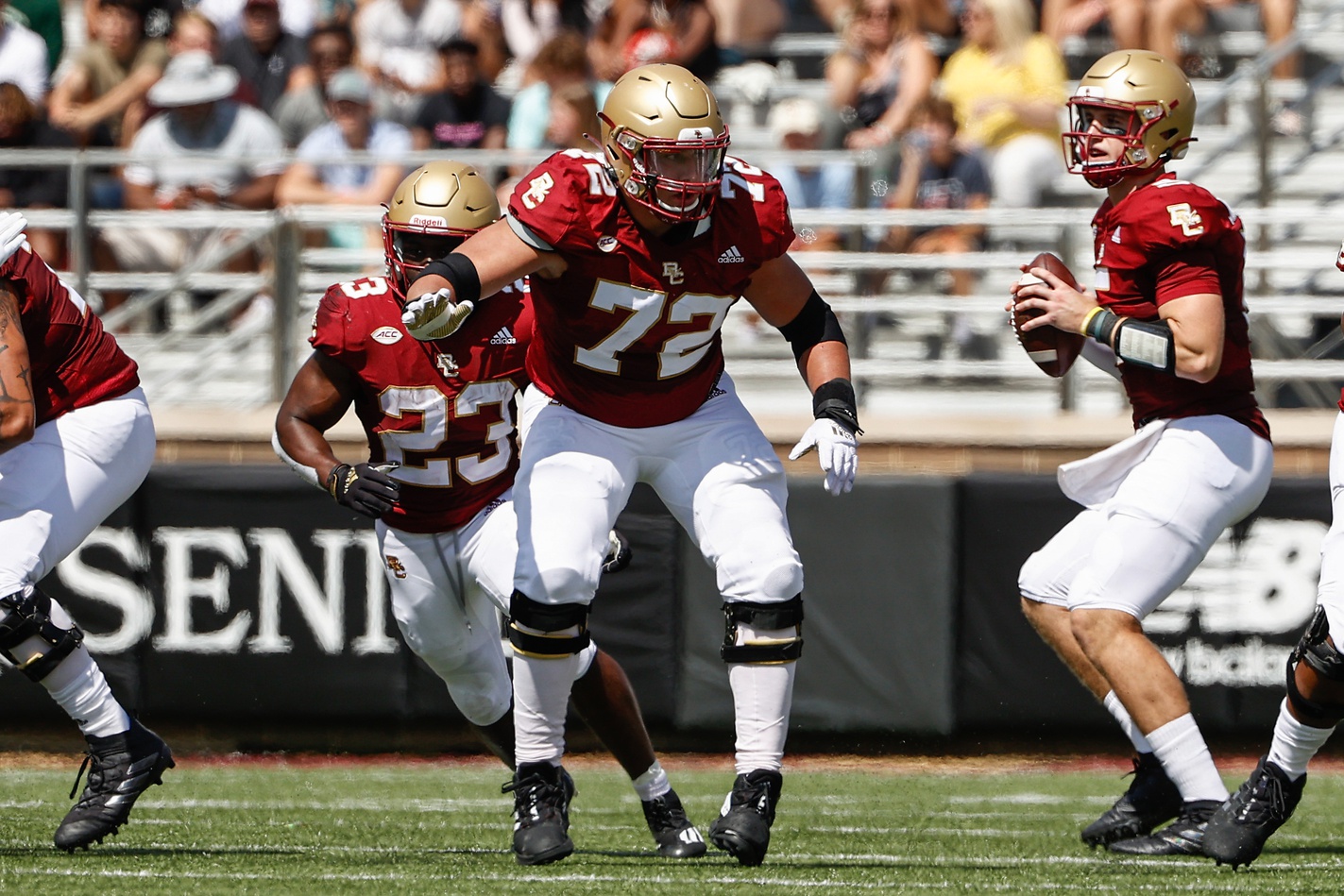 Lindstrom has terrific lateral mobility which shows up in pin/pull concepts and when he works out in space. He has good functional athleticism and overall range. His tape is littered with impact blocks in the screen game.

Lindstrom is a three-year starter for an outstanding offensive line that has featured plenty of moving parts around him. His hand technique and consistency with footwork also speak to his football intelligence. He executes with consistent timing when it comes to combos, climbing to the second level, and operating in space.

A three-year starter on a talented Boston College offensive line, Alec Lindstrom is one of just five players in Eagles’ history to be a two-time First-Team All-ACC selection. Hailing from a football family, Lindstrom’s father was a Hall of Fame lineman at Boston University and spent three seasons in the NFL. His older brother was a four-year starter at Boston College and first-round pick of the Atlanta Falcons in 2019. Lindstrom is a technician that succeeds as a run blocker with timing, angles, positioning, hand technique, and footwork. In pass protection, his ability to frame blocks, stay square, maintain his hand fits, and understanding of protection schemes makes him a standout. Lindstrom is excellent on combo blocks, climbing to the second level and executing impact blocks in space. When it comes to concerns at the next level, Lindstrom only has modest length and functional strength. He has a tendency to play too upright and I want to see him play with more consistent leverage. He also has a tendency to duck his head on contact with a lean and narrow build. He doesn’t offer much in the way of versatility as he’s likely a center only in a zone blocking run scheme. Lindstrom has the makings of a classic overachiever, but ideally he would check more boxes.

Competitive Toughness: While he isn’t the most physically dominant blocker, it’s easy to like his temperament and competitive toughness. It’s clear that he has a finisher’s mentality and wants to find those leverage points and put opponents on their back. He always looks to find work and competes through the whistle.

Balance Lindstrom has some balance issues and the root of those problems are playing too upright and dropping his head on contact. While he plays within himself, there are too many reps where he is out-leveraged and will allow some penetration where opponents can get under his pads and work him back. He’s guilty of dropping his head, losing control of reps, and defenders can work to his edges and shoot gaps—this happens mostly on run plays with a head-up nose stacked on top of him.

Anchor Ability: I appreciate Lindstrom’s ability to work overtime, stay square, and compete to maintain the depth of the pocket, but his anchor is only modest. He has to play with better leverage and add more lower-body strength to succeed at the next level.

Power at POA: Lindstrom has modest power but he’s far from a mauler and his anchor is only average. With that said, he does a good job of working his hands and moving his feet to stay square. He’s more of a technician and a blocker that wins with angles and positioning.

Hand Technique: Lindstrom is sound with his punch placement and timing but his lack of length reduces his margin for error. His hands rarely get wide and he does well to latch and move his feet. There are no glaring concerns with his hand technique other than it needing to be consistent given his lack of length.

Versatility: Lindstrom has never played a snap anywhere except center during his time at Boston College and that is the position he projects best to in the NFL. He is a scheme-specific prospect that won’t be a fit for gap blocking teams. Lindstrom does have experience as a long snapper.

Pass Sets: Lindstrom is highly consistent when framing blocks and staying square. He has good footwork and operates from a balanced base. Consistency with set points is a strength of his game.

Flexibility: Lindstrom playing too upright gives me some concern about his ability to be a consistent knee-bender. With that said, he does well to hinge and pivot. He has good spring in his step and change of direction ability.