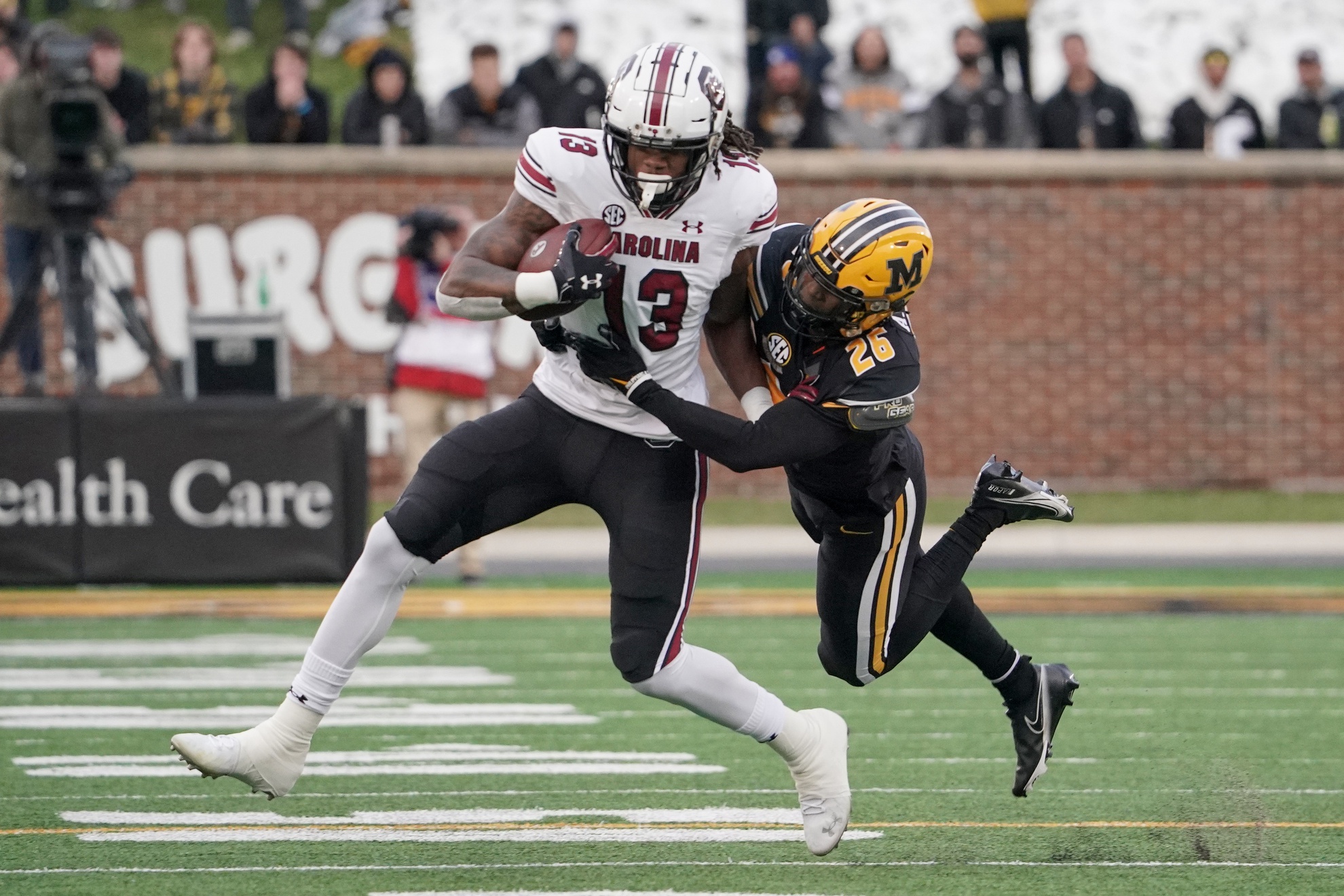 Evans has some tremendous strikes on his resume. When he catches the ball-carrier flush or with momentum, he’s capable of delivering jarring blows and has the potential to dislodge the football at the catch point. But his 2021 resume showcased some struggles with consistently taking good angles or squaring up in head-up situations. He’ll need to focus on his cut tackling and landmarks in wrap-up situations and not challenge too high to improve his tackling efficiency.

This is a physically imposing player who, in tight quarters, press coverage, and in run support offers a lot of big-hit ability. He’s assertive and offers very good functional strength when both attacking blocks and pressing and squeezing route stems vertically. A shoulder injury prompted a redshirt in 2019—that’s something that NFL teams will want to vet as well in the winter during medical checks, especially considering how physical he plays the game.

Evans offers prototypical length to play on the outside and should meet everyone’s thresholds for a perimeter cornerback. His strike zone is very large on the line of scrimmage as a result, and when he’s patient (or assertive) in his press, he’ll get his money’s worth. He’s difficult to pin and squeeze in the run game as a result as well.

Missouri cornerback Akayleb Evans is going to check the boxes for NFL defenses looking for length and physicality on the perimeter. This is a player who came to Missouri in 2021 after a successful career with the Tulsa program—and the jump to SEC competition provided a bit better context as far as where Evans currently wins and loses and just how big of a jump he’s going to face in his transition to the pro level. Physically, he’s an imposing player who offers a good series of punishing strikes as a tackler and ample length to disrupt route releases when he’s implemented in press coverage. But Evans’ instincts in coverage, his tendency to get too physical down the field, and his irregular results as a tackler are going to temper expectations for him early on and will likely result in him being coveted in the middle rounds as more of a developmental player. I like the raw skill set that is present here both on and off the field—Evans has been involved in a number of projects aside from football that indicate he’s a high-character individual, including the Akayleb Evans Foundation in his hometown, which was established in 2017, and serving as the co-vice president of the Black Men’s Initiative while on campus at Tulsa and more. Evans fits the model of what is so often all the rage in the NFL right now with his physical play, length, and stature. As a result, I’d expect even with his developmental needs, he’ll get his name called by early on day three at the latest.

Man Coverage Skills: In man coverage, Evans has offered a variety of stabs and punches at the line of scrimmage, often disrupting the timing of releases and forcing receivers to bubble their route stems excessively. But when Evans doesn’t successfully deter releases, his ability to flip and carry routes and sustain from the trail wasn’t showcased well in 2021. He’ll need to press at a high rate of success in order to serve such a role in a man-heavy system in the NFL.

Zone Coverage Skills: Evans has been exposed to plenty of blended coverage, everything from press-man to 3-cloud to more traditional deep-third drops. His eyes and quickness to drive forward are well suited for trap coverages and flat assignments in zone. I like his potential in deep-third out of a half-turn to help him with his transitions—this can also help to maximize his potential for ball production by keeping his eyes in the backfield.

Ball Skills: Evans has struggled to find the football in coverage. He entered 2021 with zero career interceptions before setting career highs with six passes defensed and one interception in 2021. While he’s done well to play the hands of receivers at the catch point and showed his potential against Central Michigan in the season opener, this is much more of a projection versus actual production.

Versatility: Missouri offered a handful of instances of playing Evans inside in a matchup-specific assignment (that’s where he logged his interception this season vs. 3-strong), but I don’t see the transitional quickness or mirror ability in catch coverage to serve in that role at the pro level. He’ll need to improve his tackling consistency if a role on special teams is in his future.

Functional Athleticism: I really appreciate how quick he is to trigger and attack the flats as a cloud corner or transitioning out of his deeper assignments in zone. I thought he was a little more fluid in his hips at Tulsa; he had some tougher transitions and conceded more space at the top of routes this past year. He’s fairly high cut so there is always going to be a natural limitation with his hips and center of gravity when playing in space. He showcases sufficient long speed vertically.

Football IQ: Evans is a mixed bag here and I didn’t necessarily get the warm and fuzzies with his transition to Missouri. He’s loaded with potential but his anticipation in coverage was amplified as a work in progress with some of the extra steps he took looking to jump routes. That, paired with an inconsistent track record of working back to find the football in coverage, is a combination that leaves me inclined to think Evans is a developmental corner.

Run Defending: Evans has flashed as a tackler and showcases the ability to collapse blocks on the perimeter and create room to help keep integrity on the outside. I think he’s got a lot of potential in this regard and he’s overwhelming for most receivers to try to keep real estate if he’s presented with stalk blocks.