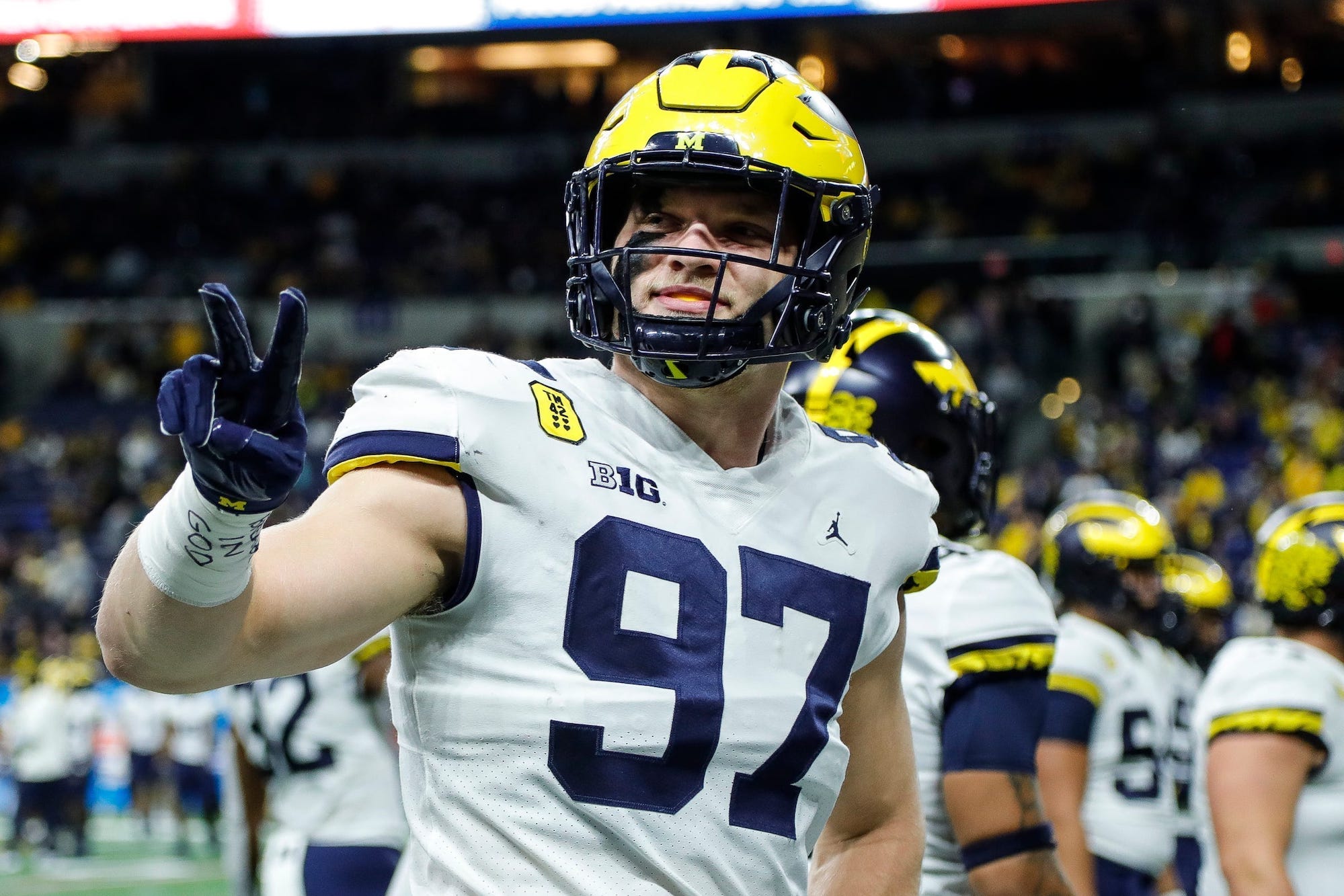 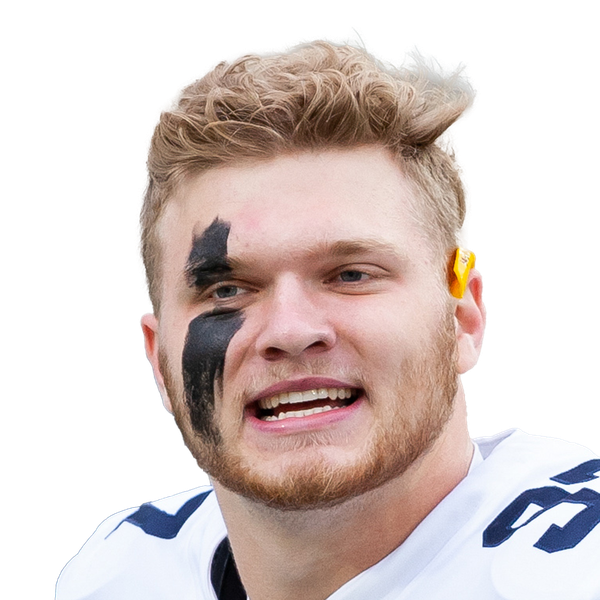 Relentless is the best way to describe him.

I’ve watched him haul tail underneath perimeter blockers on a swing screen and double back into the pocket after his initial rush track is disturbed and he loses leverage on the quarterback. Plays hard against the run and is a featured piece of short-yardage defensive packages to reduce inside and help win the point of attack. His skill set is accentuated with the urgency he plays the game with and a number of his splash plays have come with the quarterback/ball-carrier getting wrangled down while still in the grasp of a blocker.

Offers an equal amount of juice from either a two or three-point stance.

Does well with his initial drive off the line to gain ground and push tackles to open their sets when working off the edge. He’s not a dominant speed rusher but he’s claimed plenty of angles with aggression as a fastball to his vast array of rush maneuvers. Seeing him accelerate around the edge is a testament to his sustained burst and explosiveness, too. Drive up the field is a large portion of his success with inside counters as well.

Sets himself up with advantageous angles thanks to his ability to bully offensive linemen and skill players alike. He’s got a ferocious punch and when he’s stepping down to squeeze the edge, he’s not often going to let tackles slip through to the second level or successfully turn him out as a means of gaining the edge.

Michigan EDGE defender Aidan Hutchinson is the prototype. When you’re building out a 4-3 defensive end prospect and assembling the required tools for a dominant player, the end result will look a lot like No. 97 in maize and blue. Hutchinson, a second-generation Wolverine whose father, Chris, played for Michigan from 1989 to 1992 (team MVP in 1992), plays with the kind of motor and passion that leave little doubt about his enthusiasm for the game. But that effort becomes a special product when you appreciate it paired with one of the most dynamic athletic profiles eligible for the 2022 NFL Draft.

Hutchinson is a member of The Athletic’s Bruce Feldman’s Freak’s List; highlighted by a 135 lb. Turkish Get Up. Length, power, fundamentals, effort, and speed are all hallmarks of Hutchinson’s profile, leaving little doubt that he is one of the top prospects this season. Having fully realized his potential as a college prospect, I have no qualms about projecting him into any kind of defensive system. Odd or even front teams will have a home for him, as he’s proven to be equally dynamic coming out of two and three-point releases at the snap. Teams with NASCAR personnel or 5-0 pressure packages will enjoy having the luxury of moving Hutchinson around the front in order to try to craft ideal mismatches in pass-rush situations.

He’s experienced playing OLB, base end, 4i, 3T, and even in a 0T alignment during the course of his career at Michigan. Hutchinson is a presumed “plug and play” prospect thanks to his refined hand usage and his understanding of how to deconstruct blocks at the point of attack. The sky’s the limit.

Flexibility: There’s no shortage of lean and contortion in Hutchinson’s frame to squeeze angles and press the issue off the edge. His contortion skills are most notable on his inside counters to open his shoulders and reduce striking surface while still carrying explosive burst through the gap. Coils well into his stance and offers no shortage of functional strength in a three-dimensional plane—will stack blockers from all angles and shows little issue with recovery if he’s caught by late contact to contort himself into a firm fit.

Hand Counters: Comfortably one of his better traits, Hutchinson offers a slew of counters but has a few favorites in his bag. His rip and dip has claimed many victims on the edge and his hard jab/inside swim is his primary go-to when tackles overset him and push for a hard vertical set. There’s ample awareness of anatomical weak points and Hutchinson is persistent in attacking the wrist or the elbow in order to break the grasp of the opposition. He’s shown scissors counter, lift maneuver, and, most importantly, converts speed to power with a bull rush and long-arm to walk tackles back into the lap of the quarterback. The power in his hands complicates matters for tackles who wish to simply sit on his speed.

Length: Hutchinson offers desirable length for the position and his upper-body power amplifies his separation skills, allowing him to punch and extend to stack blocks and make sustaining a fit very complicated for blockers. He has the ability to press tackles back into the plus side of the line of scrimmage and should have the needed skills to play in a gap-control style system as well if required. Length shines the most in rush situations when his punches land firm and he’s able to compress sets and reduce angles.

Run Defending: Has flashed prominently in both penetration reps to fire through the mesh point unblocked and to stack up blockers alike. You do wish there was a little better anticipation on give/keep reps at times, as he’s left some production on the field by being too quick to commit—although he does appear to be executing his primary responsibility and assignment first and foremost regardless. He can be a bit late on penetration instances to gear down and square up, meaning he’s overrun some plays as well. But his wingspan and hand power allow him to squeeze gaps and help finish tackles and keep backs in the grasp when they try to run off his hip.

Football IQ: Active in communication and signaling in the pre-snap process. Has taken the transition from Don Brown to Mike Macdonald in stride and taken a big leap in his play despite the system change after the 2020 season. Has a natural feel for navigating the pocket and seamlessly transitions from an initial charge upfield into a rush counter and is constantly in motion—most impressively stringing together moves with forward progress to the football in mind.

Lateral Mobility: Isolation reps on the edge will be impacted with his redirection skills, but expecting him to string out a read and then flash to the football may be unrealistic. He’s very good, particularly for his stature, but he’s not an athlete with the raw twitch to make superhuman plays on the edge when isolated or left unblocked. He’s better when he’s taking a charge upfield and hoping he’s right as compared to slow-playing the mesh trying to read and react. But when he’s engaged with blockers and leveraging to stay overtop of outside runs, he’s got plenty of juice.

Versatility: Pick your poison. He’ll be able to fill the role. I wouldn’t necessarily advocate for a lot of reps dropping in underneath zones, although I have seen him do it a few times in 2021. That is, however, a misallocation of his talents. He can rush inside, outside, or stack a block and control the point of attack. There’s not a defense in the NFL that would be unable to accommodate and weaponize Hutchinson.