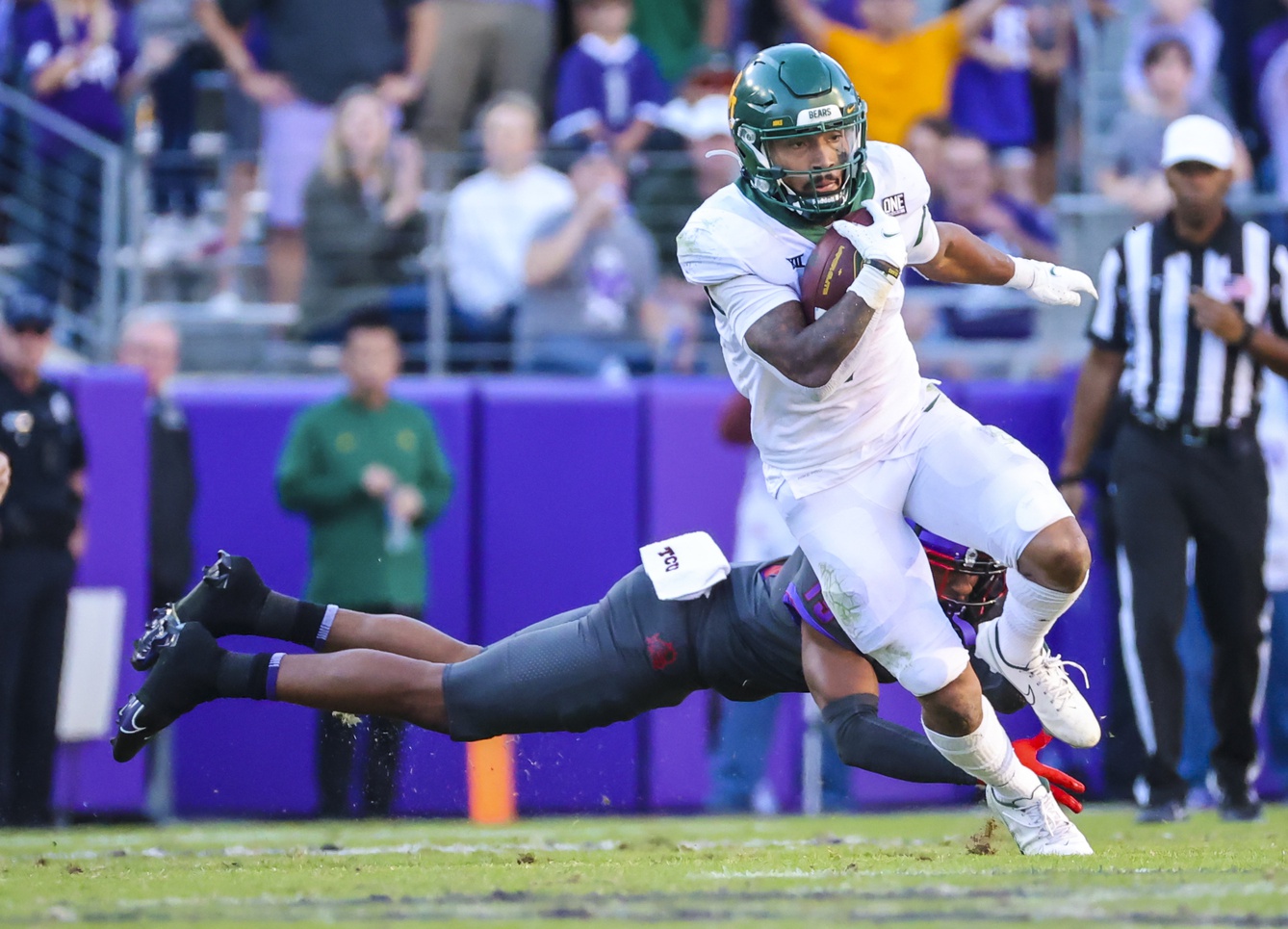 When running the football Smith has shown good discipline in how he approaches zone runs. He is a tempo runner that follows the flow of the play and is disciplined in his timing of hitting the hole. This allows for his offensive linemen to open the holes for Smith to get through, which is the sequence of the majority of his runs.

Abram Smith is a redshirt senior linebacker who is originally from Abilene, Texas. Smith is a journeyman player that took a while to find his footing at Baylor. Smith originally enrolled at Baylor to play linebacker but saw limited action early on in his career. Smith started four games at linebacker during the 2020 season, but following that season made the switch to running back—which proved to be a great decision. During the 2021 season, Smith served as the primary back for the Baylor Bears and was able to rush for more than 1,600 yards. Smith was a highly productive player for Baylor and helped carry the team to their first 11-win season in program history. To cap off his career, Smith had an outstanding performance against the Ole Miss Rebels in the Sugar Bowl, rushing for more than 170 yards. Smith is a patient runner that seems to have a good understanding of Baylor’s zone run scheme despite his limited experience at running back. He has good vision, identifies holes, and hits them. Smith has limited explosiveness and on the next level should be a short-yardage runner in an inside zone scheme.

Ideal Role: A rotational back that plays primarily on early downs

Vision: Smith plays in a zone run scheme that allows the running back to utilize their vision to find creases in the line of scrimmage and break through to the second level. Smith does exactly that. Smith shows that he can quickly identify holes from the front side of the play to the back side of the play. His capabilities force defenders to be disciplined because he can identify an opening in the defense if defenders lose gap integrity.

Footwork: This player has adequate footwork. He has an upright, wide-based running style. He is light enough on his feet to make sudden cuts and react to approaching defenders. He showed the ability to make jump-cuts in the backfield to make early penetrating defenders miss and turn a potentially negative play into a positive one.

Contact Balance: Smith runs with a wide base that serves as the foundation for him breaking tackles. His wide base keeps his overall body in balance and keeps him in a position to absorb contact from defenders while continuing to pick up yardage. This also allows for him to run through most arm tackles while staying upright.

Durability: At Baylor, Smith was the feature back in an offense where he consistently got 20-plus carries a game. Smith has shown good durability throughout the 2021 season, playing every game. On the next level, Smith’s running style can be a concern due to its physical nature and the amount of contact he engages in—it’ll eventually take a toll on his body

Explosiveness: Smith is not an explosive runner. He has a quick initial burst once he gets the hand-off, but he has to gradually gain momentum on run plays after that. Once in the open field, Smith doesn’t have the explosiveness to run away from defenders and is often caught from behind.

Versatility: Smith appears to be limited in his utilization at other positions or alignments outside of the traditional running back position. As a receiver, Smith’s routes are not defined and he seems to be uncomfortable running routes. He is also an average pass-catcher that has been limited to catching swing routes out of the backfield.

Elusiveness: There are multiple examples of this player’s running style that shows he has limited elusiveness. In the open field where Smith has to make one defender miss he struggles to do so and chooses to try to run through the defender. His lack of elusiveness also shows in how he hits the hole and becomes a straight-line runner. This also prevents him from being a creative running back and oftentimes his success is predicated on how well the offensive line blocks that particular play.

Ball security: During the 2021 season, Smith was asked to be the feature back, which meant more carries but it also meant more opportunities to fumble the ball. Smith is not perfect in his ball-carrying and he has put the ball on the ground a couple of times this year, but it’s nothing to be overly concerned about. Smith’s style as a bruiser consistently places him in situations where he is constantly exposing the ball to contact and I believe if Smith adjusts his running style a bit it will eliminate any issue of fumbling the football.

Passing Down Skills: In pass protection, Smith has shown to be an adequate protector. He can carry out run fakes and quickly scan for second-level blitzers. But as a pass-catcher, Smith leaves much to be desired. He is below average in his ability to both run routes and catch the ball out of the backfield.