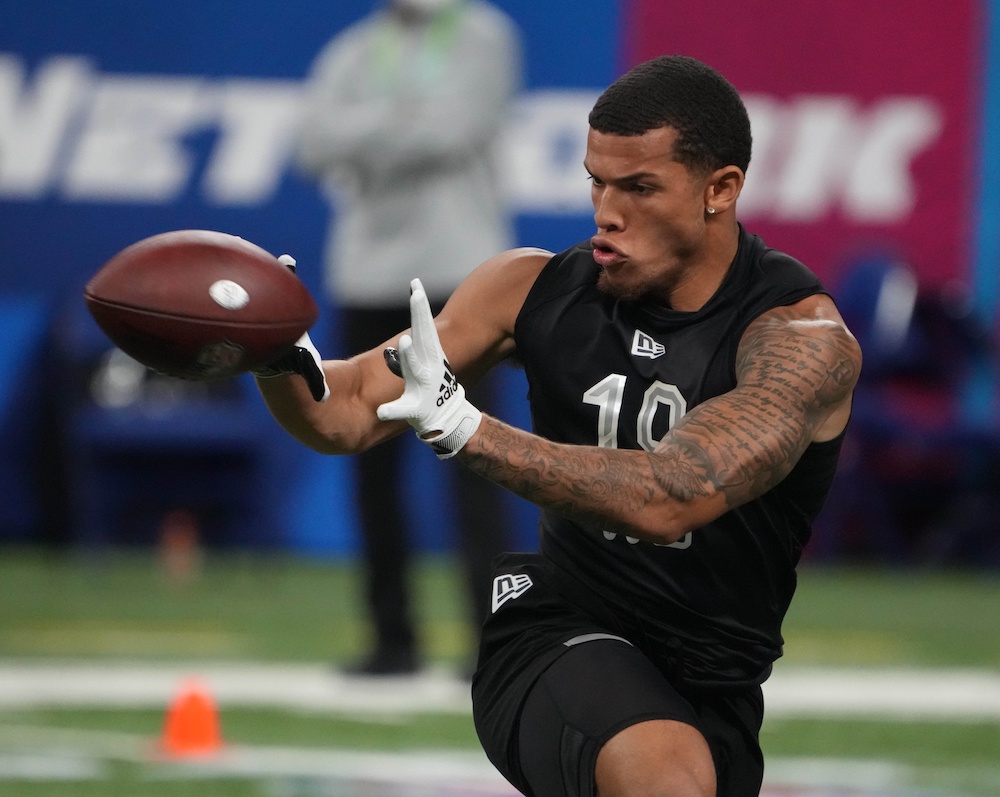 We see one every year: a small-school talent that takes over the pre-draft scene and Western Michigan’s Skyy Moore is that next talent in line. He’s a smooth mover with venus fly traps for hands and in what will be one of the deepest wide receiver classes of recent memory, his tape and impressive pre-draft circuit has seen his name continue to rise on league-wide draft boards. As the NFL continues to evolve into an overwhelmingly pass-happy league, here are a few teams that could benefit from Moore’s talents this fall.

Following the losses of Tyreek Hill and Demarcus Robinson, the Chiefs have quickly found themselves scrounging for pass-catchers. Although tight end Travis Kelce and wide receiver Mecole Hardman remain in town, and JuJu Smith-Schuster and Marques Valdes-Scantling should provide serviceable weapons on the perimeter, the addition of Moore could provide quarterback Patrick Mahomes with a sure-handed target over the intermediate areas of the offense. More importantly, intermediate areas away from Kelce. Moore is a talent with the route-running ability to provide true alignment versatility within Offensive Coordinator Eric Bieniemy’s ever-evolving offense.

With Allen Robinson now in Rams blue, Darnell Mooney will finally earn the right to holster the top wide receiver role within Chicago’s revamped offensive scheme. However, behind Mooney, the well runs dry and if newly minted head coach Matt Eberflus looks to keep quarterback Justin Fields comfortable with guys who are able to create space on the outside, inserting Moore would provide the Bears with two young pass-catchers to build around.

Michael Pittman Jr is a start, but there is still much to be desired with Parris Campbell, and relying on him to be a reliable target for quarterback Matt Ryan is a stretch. Enter Moore, who should be able to handle a massive target volume from the first week, take eyes off of Pittman, and, hopefully, allow Campbell to grow into a serviceable weapon after General Manager Chris Ballard took him in the second round back in 2019. It could, and should be Campbell’s last shot.

This is a spot where I could see Atlanta double or triple dripping with nine overall picks. A group touting Olamide Zaccheus, Damiere Byrd, and KhaDarel Hodge is just not up to NFL standards. While that’s no disrespect towards their individual talents, newly signed quarterback Marcus Mariota will need an improvement in talent on the perimeter for Head Coach Arthur Smith to gauge whether or not he’s the future in Atlanta. Tight end Kyle Pitts will remain the focus point through the air and targets will be had by 2021 sixth-rounder Frank Darby, but adding Moore is a move towards the future. A core trio of Pitts, Moore and hopeful-returnee Calvin Ridley moving into 2023 is an arsenal to build upon.