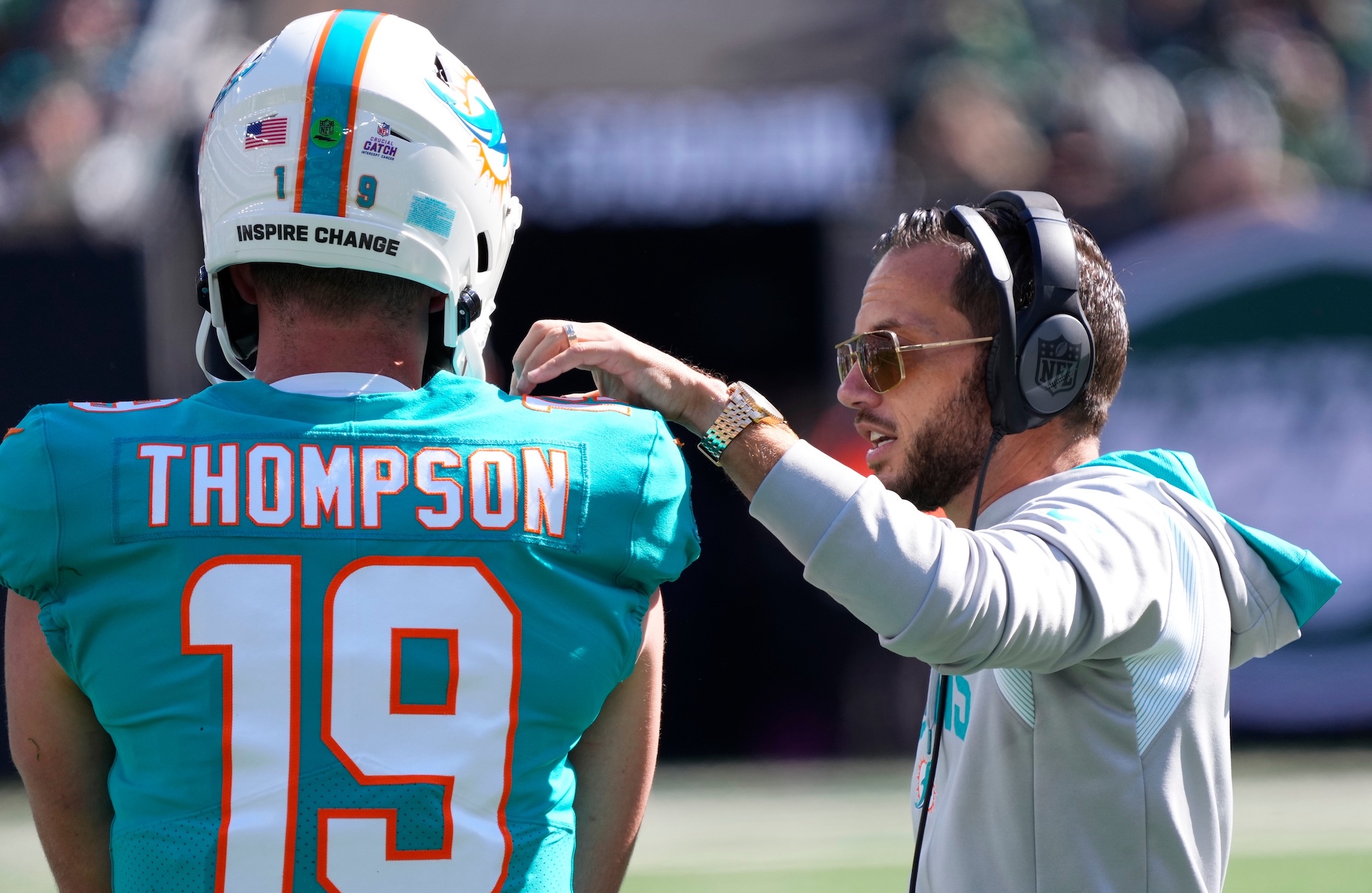 What Can We Expect From Skylar Thompson’s 1st Start?

Miami Dolphins rookie quarterback Skylar Thompson will make his first career start in Sunday’s contest against the Minnesota Vikings, head coach Mike McDaniel confirmed on Wednesday. The Dolphins are down to their third quarterback as both Tua Tagovailoa and Teddy Bridgewater are dealing with concussion injuries. McDaniel will need to craft a game plan that attempts to keep Miami’s offense efficient and on schedule without overwhelming Thompson.

The No. 247 overall selection in the 2022 NFL Draft, Thompson replaced Bridgewater in the first quarter of Miami’s 40-17 defeat to the New York Jets. Bridgewater departed with elbow and head injuries and eventually entered the concussion protocol. Thompson completed 19-of-33 passing attempts for 166 yards, zero touchdowns, and one interception. Thompson was sacked twice and also lost a fumble. He’ll have to take better care of the football if the Dolphins hope to upset the Vikings.

Thompson first impressed the Dolphins throughout the preseason. In the three exhibition showings, Thompson went 36-of-48 (75% completion percentage) for 450 yards for a 138.4 passer rating, which also led all quarterbacks with at least 42 preseason attempts. Thompson led the NFL this preseason with five touchdown passes against zero interceptions. Thompson made a profound impression on Miami’s coaching staff.

Thompson is a dual-threat quarterback with a penchant for manufacturing gains off-script. He’s an instinctual quarterback that can scramble in the backfield to extend plays then throw the ball down the field to his receivers. McDaniel will attempt to limit Thompson’s overall impact on the contest, but the former Kansas State product is capable of creating explosive plays with his legs and arm.

“Teams love a quarterback that can use his legs to extend the pocket and run for first downs,” Thompson told The Draft Network in March. “Possessing the athletic ability to extend plays and keep the chains moving is one of the goals for my position. I believe it adds value to what I do. Football has been evolving in that direction for quite some time now. It’s an ability of mine, but it’s not something that I rely on.”

Luckily for Thompson, the Dolphins have the most explosive one-two punch at receiver across the league. He won’t have to rely on athletic ability alone. The presence of Tyreek Hill and Jaylen Waddle remove some of the pressure off Thompson’s shoulders. McDaniel will instruct Thompson to get the ball in the hands of his playmakers near the line of scrimmage with one-to-two read dropbacks while allowing Hill and Waddle to create post-catch for themselves.

Raheem Mostert is another Dolphin that could help Thompson successfully navigate his first start. Miami’s running game low-key enjoyed its most successful showing in Sunday’s lowly defeat to the Jets. Mostert rushed for 113 yards and a touchdown on 18 carries (6.3 yards per carry). Mostert surprisingly out-touched Chase Edmonds 19-1 and routinely found rushing lanes to exploit. The Dolphins will look to ride Mostert should they manage to keep things close Sunday.

Thompson is a savvy and tough pocket manager with mobility and creativity. He enjoyed his best season at Kansas State in 2021 by accounting for 16 touchdowns versus just four interceptions. He also surpassed 2,000 passing yards.

“I’ve been in every situation that you can possibly think of in a football game,” Thompson told TDN. “A key part of playing quarterback is to remain even-keeled. You can’t live life on a rollercoaster. I’ve played in and led my team to big-time upsets over Oklahoma. We won a lot of games over big-time programs.”

Thompson now finds himself in unfamiliar territory despite his vast collegiate experience. Leading the Dolphins to victory over the Vikings would add another notch to his belt. Don’t be shocked if Thompson executes the unthinkable.