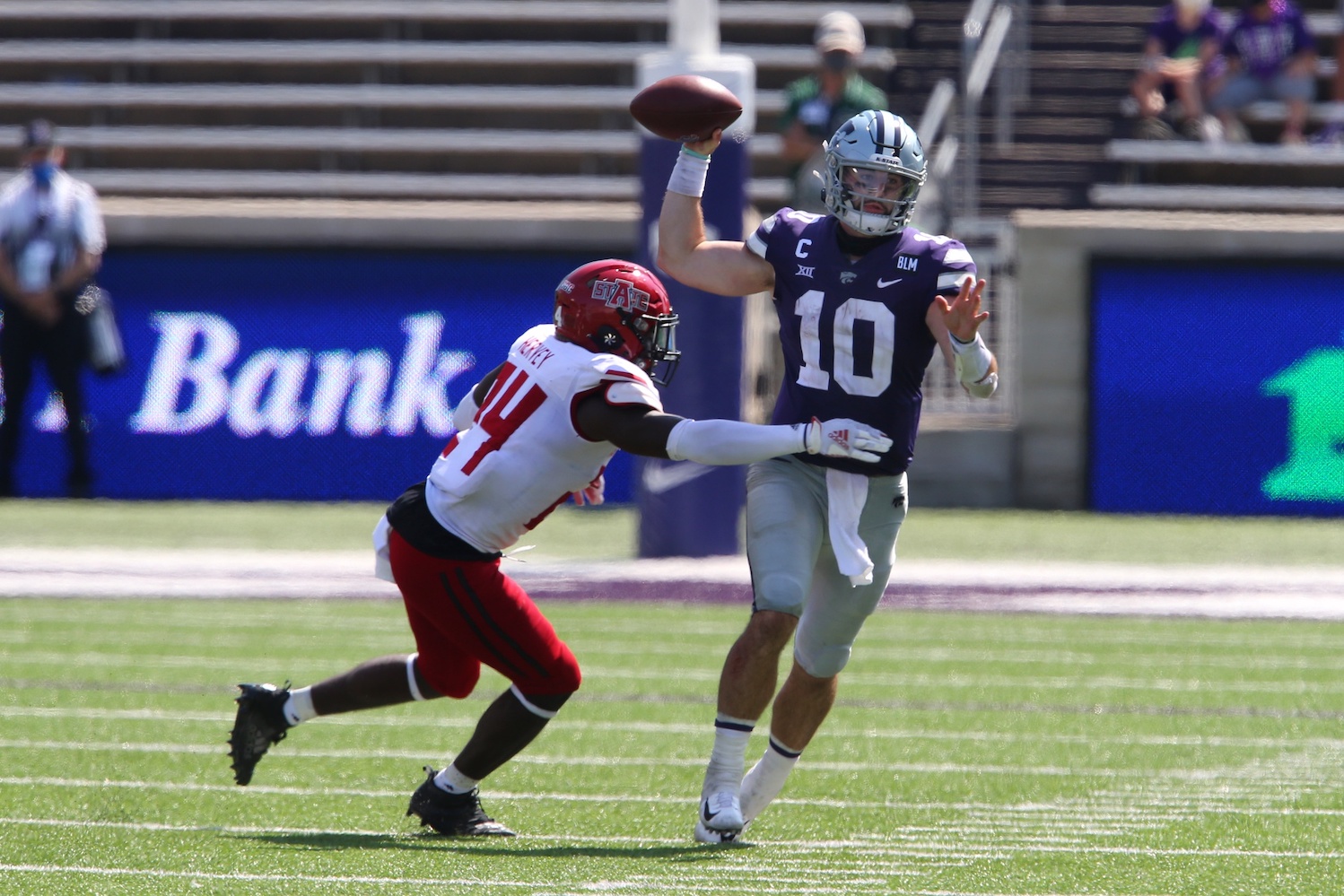 Skylar Thompson A QB To Watch Ahead Of 2022 NFL Draft

Kansas State quarterback Skylar Thompson is a player who is up against the odds in the 2022 NFL Draft largely due to injury issues this season. He’s also a guy who has played some really solid football when he’s totally healthy. Thompson, who will have the chance to continue showcasing what he can do in the Shrine Bowl just next month, made his return in a big way as he took the field for the first time since Nov. 20 in the Texas Bowl. Thompson had a highly successful day through the air while Wildcats standout running back Deuce Vaughn was able to get things going on the ground just as effectively. Thompson finished out the 42-20 win completing 21-of-28 passes (75%) for 259 yards with three touchdowns and zero interceptions. He appeared in nine regular-season games this past year, completing 69.5% of his passes for 2,113 passing yards with 12 touchdowns and four interceptions. Even though he’s largely projected to be picked up as either a seventh-round draft pick or a priority undrafted free agent, there’s reason to be intrigued about him and certainly some things to like about his game. Thompson holds just about every record a K-State quarterback could hold and has left a lasting mark on a program that will look a lot different come next season. Thompson’s 39 games started is more than any other signal-caller in Wildcats history, as are his 23 wins as a starter. While he fits the mold of more of a pocket passer than anything else, he accomplished more through both the air and on the ground than most players who have come through K-State have, with 6,875 passing yards and 1,077 rushing yards. While the Texas Bowl—which Thompson described as one of the most meaningful games of his career ahead of the contest—was an exceptional showing for him, it isn’t the only good game he had this season. For example, Thompson did what he could to put his team in a position to beat No. 6-ranked Oklahoma, finishing a close 37-31 loss to the Sooners completing 29-of-41 passes (70.7%) for 320 yards with three touchdowns and zero interceptions. Thompson isn’t a player who is constantly going to burn opposing defenses on the ground, but he is one who has the ability to move around and make some things happen outside of the pocket, as well as work with some designed quarterback runs. And regardless of what it calls for, Thompson is going to give a team all he’s got to move the chains and get a first down. Case in point: https://twitter.com/Thekstatefan2/status/1479160196530331652?s=20 As a passer, he’s shown a lot of accuracy and effectiveness in the short and intermediate passing game but has had success down the field as well and despite some concerns floating around about arm strength. He’s cool in the pocket and has performed well under pressure while also taking care of the football and rarely turning it over. https://twitter.com/FTB_Vids_YT/status/1478582483067174913?s=20 Thompson may not be getting the same amount of attention as a lot of other quarterbacks in this class, but there’s no question that he’s meant the world and then some to Kansas State even in the face of adversity and that he’s got a good foundation to continue building upon.