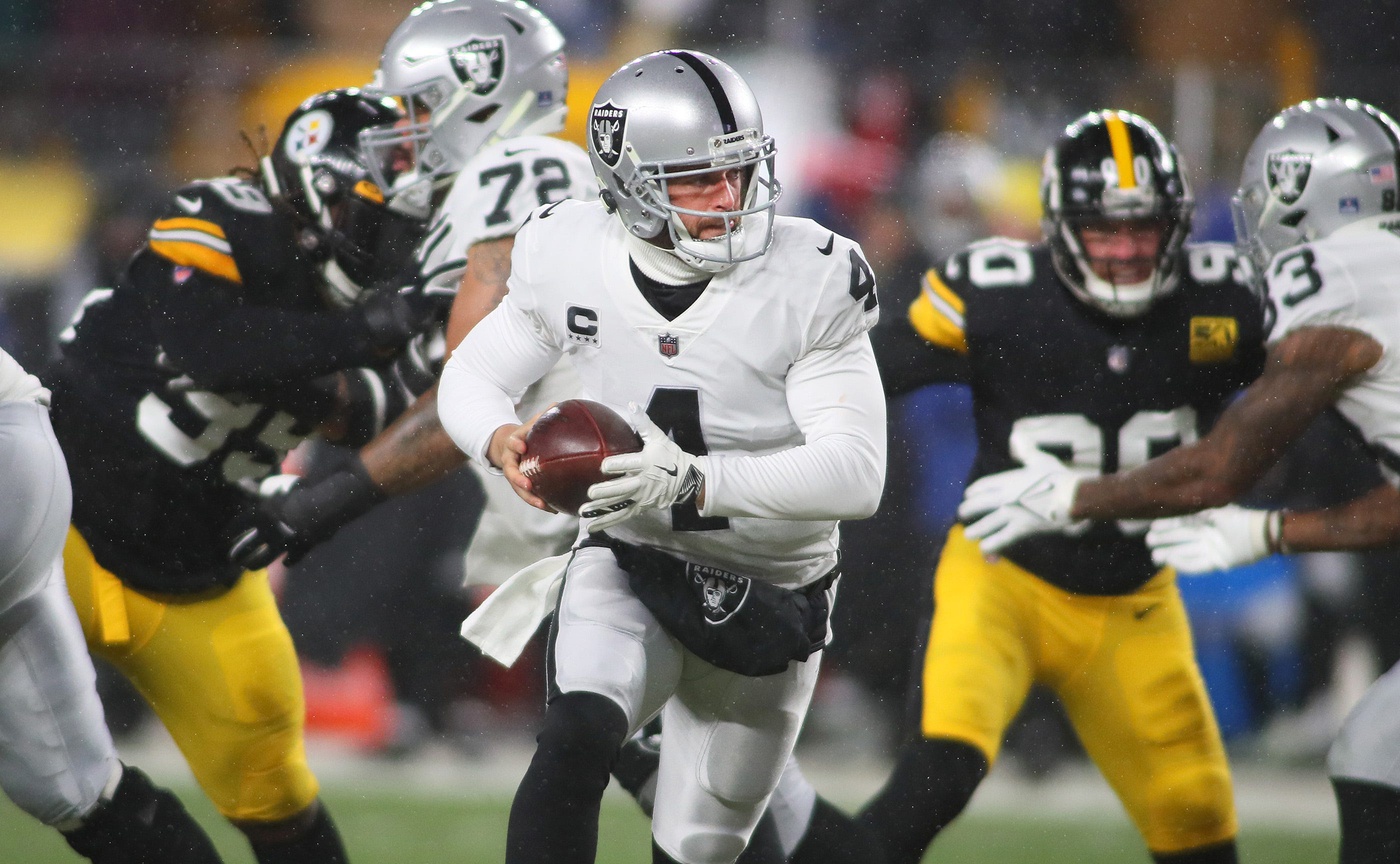 The Las Vegas Raiders may be considering benching quarterback Derek Carr, according to reports. Carr was abysmal in Saturday’s loss to the Pittsburgh Steelers, completing just 53.3% of his passing attempts (16-for-30) while throwing for 174 yards, one touchdown, and three second-half interceptions. The Raiders should consider benching Carr in order to protect their future interests and head coach Josh McDaniels isn’t ruling out the possibility.

“For us to be able to win at this time of the year and be productive, offensively you have to throw the ball better than what we’ve thrown at times here in the last month and a half,” McDaniels said.

In relation to benching Carr, McDaniels said the following: “I think there’s a possibility that we would do the right thing regardless of the position.”

That’s not exactly a ringing endorsement. Carr is currently playing abysmal football. Carr has been a turnover machine that’s thrown at least one interception in five consecutive contests. Carr has thrown nine interceptions since Week 12, which leads the NFL across that time frame. Carr hasn’t completed 60-plus-percent of his passing attempts since a late-November victory over the Seattle Seahawks.

There’s also a notable contract-related caveat at play. Carr signed a three-year contract extension with the Raiders worth $121.5 million earlier this year, but the Raiders wisely left themselves an out. Carr’s extension came with a trigger that would guarantee approximately $33 million for the 2023 campaign, per Spotrac. The Raiders could release Carr before Feb. 15, leaving them with a manageable dead cap hit of $5.6 million. Carr’s 2023 earnings would be guaranteed should he suffer a severe injury. It adds to the intrigue of benching him.

McDaniels likely holds a higher opinion of Stidham than most do, however. The Raiders originally acquired Stidham in a trade with the New England Patriots in May. The Raiders parted with a sixth-round selection in the 2023 NFL Draft in order to land Stidham’s services. McDaniels spent three seasons (2019-21) as Stidham’s quarterbacks coach and offensive coordinator in Foxboro.

Raiders general manager Dave Ziegler also spent time in New England alongside McDaniels and Stidham. McDaniels’ influence undeniably played a role in bringing Stidham to Vegas. No coach is more familiar with Stidham’s strengths and weaknesses than McDaniels is. It goes without saying, but the Raiders wouldn’t have traded for Stidham if they didn’t hold a high opinion of his abilities.

Benching Carr for Stidham would essentially guarantee the Raiders the freedom necessary to release or trade Carr in the offseason. Given Carr’s lack of success in McDaniels’ scheme this season, it currently appears as if a split is inevitable. It may influence McDaniels’ decision on whether or not to insert Stidham into the starting lineup.

McDaniels and Ziegler inherited Carr at quarterback. He’s not their guy, and he’s not proving capable of executing McDaniels’ system at a high level. The Raiders are expected to consider their options at quarterback moving forward. They currently possess the No. 9 overall selection in the 2023 NFL Draft. That places them firmly within striking distance to draft C.J. Stroud, Bryce Young, or Will Levis. A veteran with previous experience under McDaniels like Tom Brady or Jimmy Garoppolo may also intrigue them.

Carr gives the Raiders a better chance to secure victories than Stidham does, but there are long-term implications at play. The Raiders have difficult decisions to make. Benching Carr would be a wise decision for a Raiders franchise that’s run out of patience with his lackluster form.