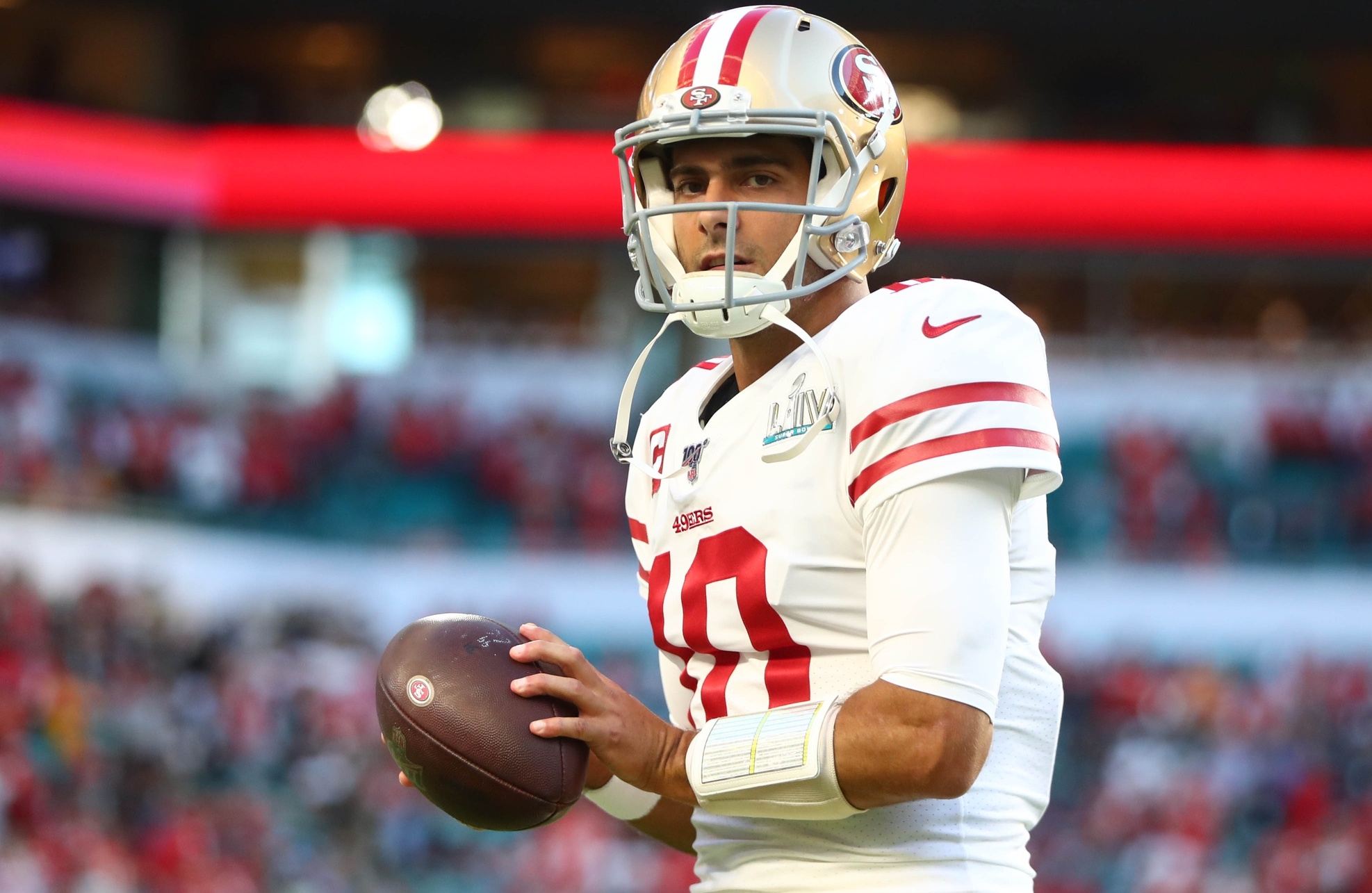 Should Giants Trade For Jimmy Garoppolo?

The New York Giants are the current betting favorites to acquire San Francisco 49ers quarterback Jimmy Garoppolo, via BetOnline. The Giants are listed at +200, with the Cleveland Browns trailing at +225. Giants Head Coach Brian Daboll has seemingly been underwhelmed by Daniel Jones‘ performances throughout the early portion of training camp, potentially opening the door for the Giants to make a move at quarterback prior to September.

“He’s making progress, but he still has a ways to go,” Daboll said. When asked about Jones being more aggressive downfield, Daboll hit reporters with a: “Time will tell. We certainly encourage that.”

Indications are that Jones has experienced more bad days than good ones at recent Giants practices. Jones is entering a critical contract year following the Giants’ decision to not pick up his fifth-year player option. It’s a fate-defining campaign for Jones under a new regime. Backup quarterback Tyrod Taylor has reportedly outperformed Jones at practice.

Despite the current question marks at quarterback, the Giants shouldn’t try to acquire Garoppolo. Here’s why.

We understand why the Giants may feel tempted to trade for Garoppolo, who’s taken the 49ers to one Super Bowl and another NFC Championship Game in recent seasons. Garoppolo is undeniably a better quarterback than Jones or Taylor, but is Garoppolo capable of taking the current iteration of the Giants to the postseason? Unlikely. The Giants haven’t committed to Jones beyond 2022 for good reason.

This is a transitional season for the Giants (again). Schoen and Daboll would be wise to utilize the current campaign to evaluate the overall state of their franchise and the quarterback position most notably. The Giants’ roster experienced an abundance of change throughout the offseason and more overturn is coming following the conclusion of the 2022 season. The Giants hired Daboll partially due to his brilliant offensive mind. Daboll helped Bills quarterback Josh Allen develop into one of the most productive quarterbacks in football. A full season working together with Jones is required before the Giants can make their decision at quarterback. Trading for Garoppolo would only delay the inevitable.

Garoppolo’s contract adds an additional difficult layer to any potential trade discussions. Garoppolo is entering a contract year where he’s set to earn a base salary of $24.2 million with a cap hit of $26.950 million, per Spotrac. Any trade would have to include an extension for Garoppolo if the 49ers don’t eat a large chunk of his salary. The Giants should be hesitant to commit to Garoppolo (or any realistic quarterback they could target) beyond 2022, further complicating matters. The Giants entered the offseason with salary cap difficulties and currently possess just $6.4 million in available cap space, per Spotrac. It’s a situation both sides could figure out if necessary.

In what is possibly the most important factor for New York, the 2023 NFL Draft appears littered with talented quarterback prospects. The impending college football season will ultimately determine the fate of this upcoming class, but it’s currently expected to be robust with potential franchise quarterbacks. C.J. Stroud, Bryce Young, and Will Levis are all currently in the mix to be selected in the top 10. Several quarterbacks are expected to be selected in the first round after the 2022 NFL Draft only saw one signal-caller drafted in the opening 32 picks. Should Jones, Taylor, and the Giants crash and burn, Schoen and Daboll should find comfort in the opportunity to draft a quarterback of their choosing, one that possesses more long-term upside than Garoppolo.

The Giants feature one of the least desirable quarterback situations in the NFL. It’s a sink-or-swim season for Jones. Taylor is a veteran journeyman and bridge-type option. The Giants must self-evaluate before acting out of desperation. Acquiring Garoppolo isn’t the answer to New York’s problems.