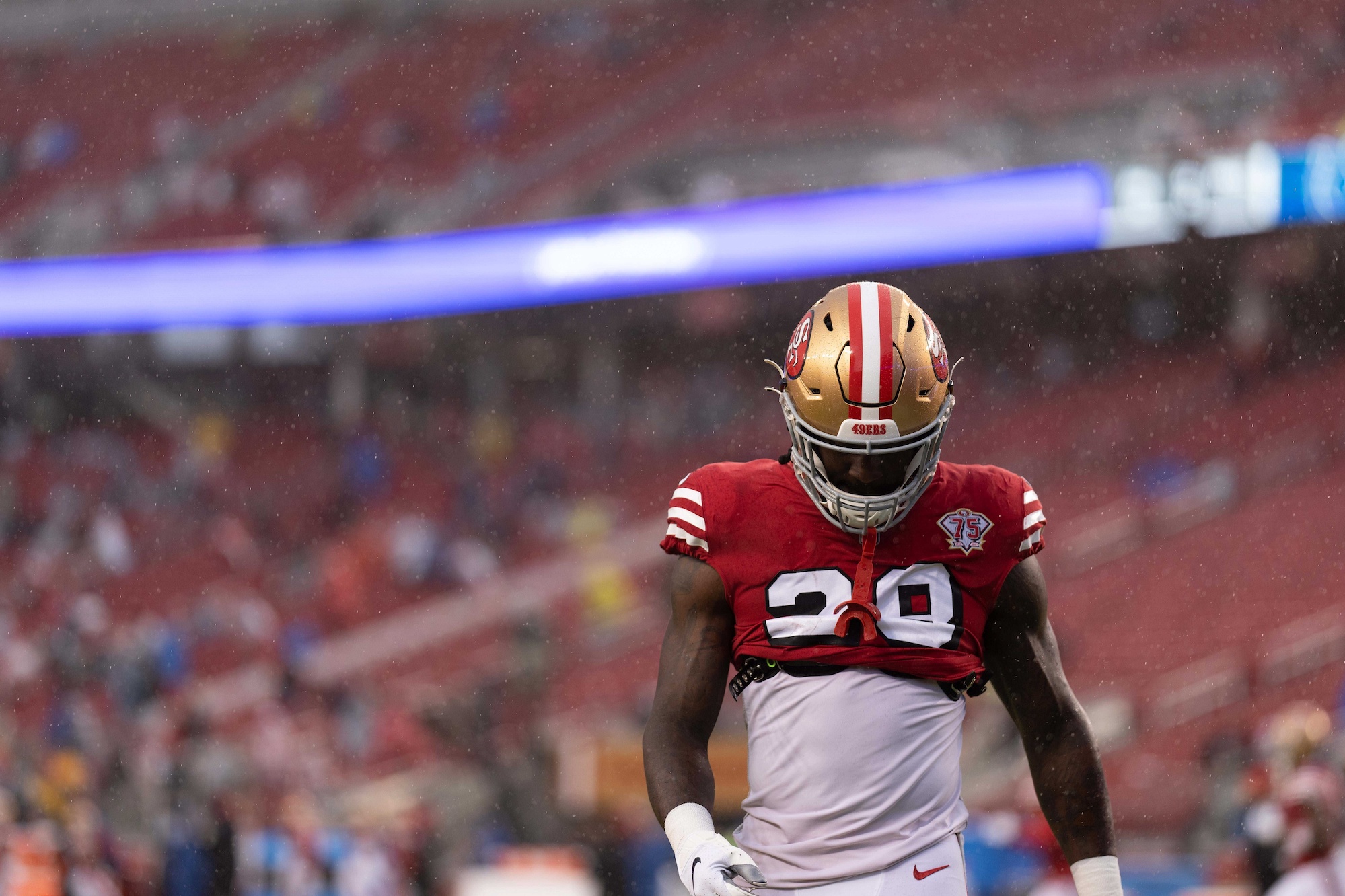 Should 49ers Fans Be Worried About Trey Sermon?

According to reports, San Francisco 49ers running back Trey Sermon is nowhere near becoming the lead ball-carrier this offseason. The Athletic’s Matt Barrow recently wrote that Jeff Wilson Jr. would serve as the backup to Elijah Mitchell if the season began today. Sermon has plenty of time to turn his trajectory around with strong showings at training camp and throughout the preseason, but all signs are currently pointing toward another disappointing campaign for Sermon in 2022. San Francisco fans should be concerned about their sophomore third-round pick.

Excitement was sky-high for Sermon’s rookie season. It was understandable. On paper, Sermon found himself in an ideal landing spot. 49ers Head Coach Kyle Shanahan has routinely overseen some of the league’s most productive and efficient rushing attacks. As a prospect, Sermon’s familiarity with executing Shanahan’s preferred zone-based rushing scheme made him a natural fit in San Francisco. It’s partially why general manager John Lynch identified Sermon as a pre-draft target, eventually trading up in order to draft him with a top 100 selection.

“We ran a lot of outside zone at Ohio State,” Trey Sermon said, in an exclusive interview with The Draft Network. “That was my favorite play.”

It wasn’t to be, despite the 49ers fielding a top 10 rushing attack in 2021, averaging 127.4 yards per contest via the ground game. Sermon remained an afterthought. The former Oklahoma and Ohio State standout received just 41 carries in nine regular-season appearances. Sermon was easily outgained by Mitchell, Wilson, and Deebo Samuel, whose role as a “wide back” took away even more touches from Sermon. Quarterbacks Jimmy Garoppolo and Trey Lance fell three carries short apiece (38) from matching Sermon’s rushing attempts.

Sermon’s failure to secure a consistent role as a first-year player was mildly concerning, but it’s worth acknowledging several second and third-round rookies have faced acclimation periods as of late while essentially redshirting during their rookie seasons. Sermon deserved a grace period, but a similar situation in year two would raise the panic level, however. A sophomore season is supposed to showcase growth and a new-found ability to better adapt to your surroundings. The 49ers are currently showing little faith in Sermon’s ability to take that next step.

It will be interesting to monitor how Samuel’s potential usage impacts Sermon, if it all. Samuel’s reported offseason gripe with the 49ers was allegedly in relation to his usage as a running back. Samuel earned 59 carries last season, scoring an efficient team-leading eight touchdowns with those opportunities. If those touches become available, it’s worth monitoring how Shanahan and new run game coordinator Chris Foerster plan to divide those carries. Perhaps there’s a path to salvation for Sermon. But the drafting of Tyrion Davis-Price signals bad news for Sermon’s outlook.

Nothing about the 49ers’ behavior suggests they believe Sermon can become their starting running back. If Lynch viewed Sermon as an every-down player, he wouldn’t have used a premium third-round selection on Davis-Price just one year after drafting Sermon with a fellow third-round pick.  Shanahan has always preferred to operate his backfield with a committee-based approach. The 49ers require multiple running backs in order for Shanahan to execute that plan. But if Sermon plays behind Mitchell, Davis-Price, and Wilson in 2022, even Shanahan’s system won’t find consistent playing time for the fourth-option running back.

A massive training camp looms for Sermon. Sermon must work through whatever inconsistencies have hampered his ability to make the desired impression on Shanahan and the 49ers’ coaching staff. 49ers fans will be monitoring the situation closely.