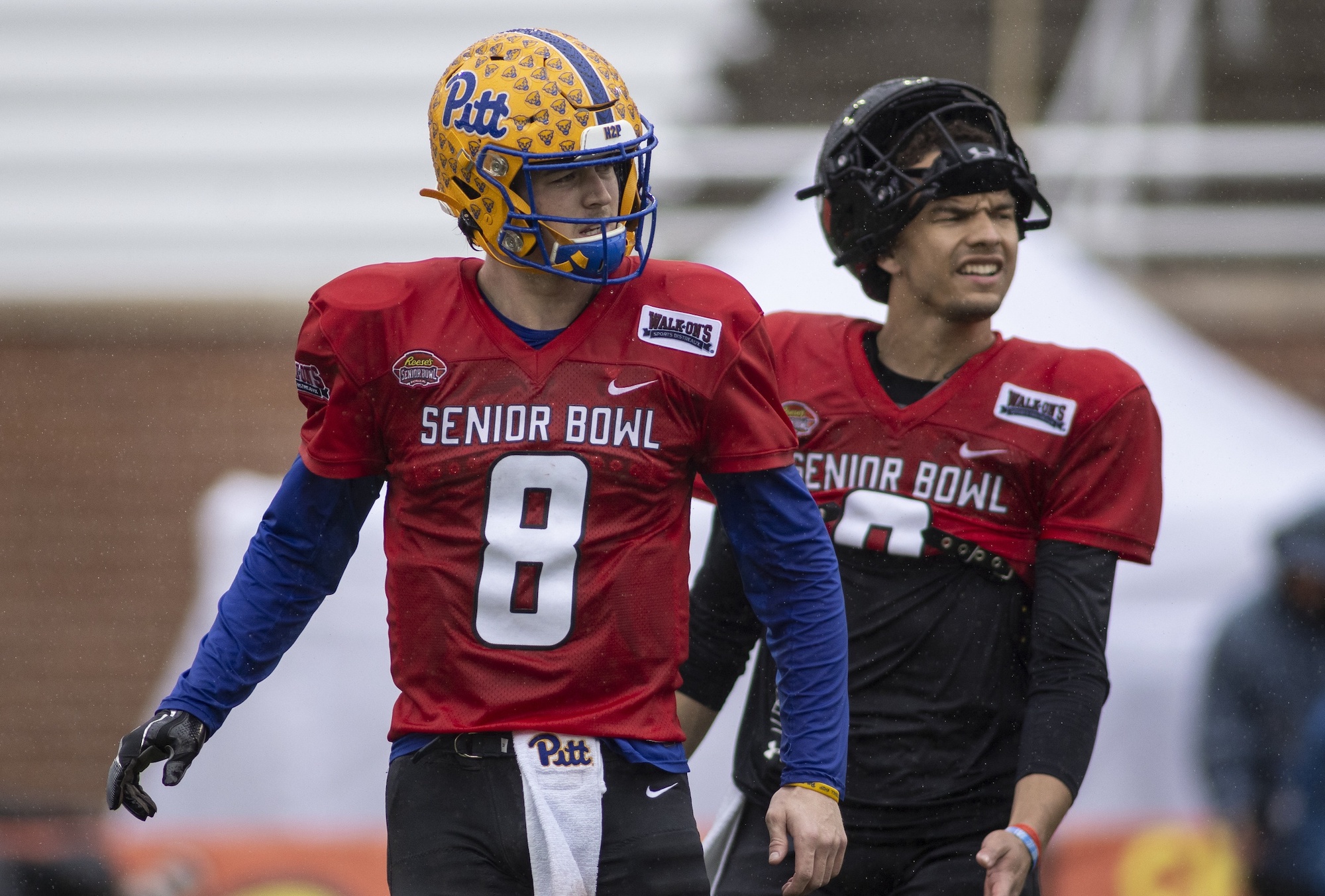 Senior Bowl Quarterback Report: How Did Each Passer Perform?

The 2022 Reese’s Senior Bowl is in the books outside of the game on Saturday and several quarterbacks have spent three days' worth of practice time in front of scouts trying to raise their stock ahead of the draft. Here’s a look into what each one showed and where they stand before April comes around:

Sam Howell Scouting Report: It was just over a year ago that several were asking the question of whether or not Howell was a beneficiary of his supporting cast. Then the narrative quickly flipped this year to whether or not Howell would stand out even more if he had a better offensive line and better players around him. Howell had some throws he’d like to have back on each day of practice and was among the players who needed more improvement as far as footwork is concerned, but he had more zip on the ball than many anticipated. While he didn’t necessarily do anything to significantly raise his stock, he did show a lot of positives and is a complete quarterback in terms of being able to throw the ball efficiently for the most part and being able to run with grit—he’s developmental from some aspects but he’s able to fit into several different schemes that should at least make him a high-end backup starting out.

Carson Strong Scouting Report: Day 1 of practices in Mobile confirmed what a lot of people thought about Strong—he has the best deep ball in the class in terms of accuracy and placement and it wasn’t particularly close between him and the other quarterbacks in the showcase in that regard. He looked like the most polished pure passer there, though there was one low throw on the first day and he missed high a handful of times on the second day when all quarterbacks were having to adjust to inclement weather. One of the biggest things he was able to prove a point on was that his supposed knee issue, which doesn’t seem to be much of an issue at all, didn’t rear its head as he showed great ability to maneuver the pocket—evading pressure and rushing the ball a couple times to cast doubt on the narrative that he’s a complete statue despite very much being a pure pocket passer.

Bailey Zappe Scouting Report: Zappe had a lot to show coming into this week. He put up astronomical numbers, impressively etching his way into the FBS record books with nearly 6,000 passing yards and 62 touchdowns in his lone season with WKU after transferring over from Houston Baptist. The Hilltoppers signal-caller was clearly having a difficult time making the adjustment and playing under center, something he’s not exactly used to doing on a regular basis, during the first day when he struggled with a lot of the shorter throws. Zappe showed a lot more consistency in the final two days, establishing himself beyond just the deeper passes and settling in to show he could contend against a higher-level competition—something that many questioned considering that he comes from a smaller conference.

Malik Willis Scouting Report: Right next to Zappe, Willis had the most to prove—but for different reasons. Willis’ stock took a hit after the early portion of the season as his struggles as a passer began to overshadow his pure athletic talent. Willis was knocked for lack of touch of his throws, lack of accuracy, overall inconsistency, and decision-making as he had three games with three interceptions against subpar secondaries. But Willis found redemption after some first-day struggles during Senior Bowl practices. Willis hit his stride on day two and showed continued growth on day three, looking like an entirely different player in the realm of accuracy and consistency. He began pulling away as QB1 for several analysts because of his growth as a passer, more solid footwork, live arm, and sheer athleticism.

Desmond Ridder Scouting Report: There was a lot of concern about Ridder after he finished out the first day of practice as the worst quarterback to take the field. However, he was arguably the best in the wind and the rain on day two, showing significant improvement with solidly placed passes at all levels of the field despite the elements. Ridder is best described as a player that has good foundation traits-wise but needs some development to remain consistent. While he did have his struggles, he showed potential in Mobile. He looked best on short and intermediate throws—his deep ball was hit or miss—and he seemed to become more decisive as he settled in.

Kenny Pickett Scouting Report: Pickett’s quarterback trainer, Tony Racioppi, has called Pickett “Johnny Consistent” and that rang true throughout practices this week. Pickett didn’t do anything to hurt himself or increase his stock in a big way but was largely the same guy every day—something that should have a lot more of a positive connotation than it does. Pickett handled the concepts of the National Team offense well and stayed steady outside of a handful of missed deep passes and a few throws on the second day that went outside of his receivers’ grasp as several quarterbacks, including himself, struggled to overcome the weather issues.