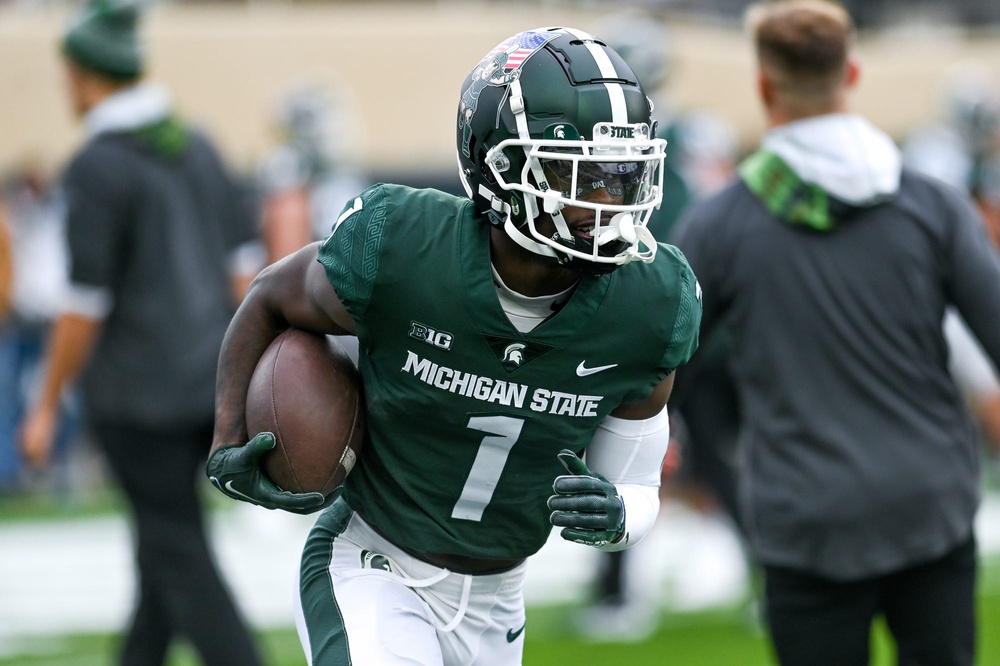 Ladies and gentlemen, it’s almost that time when the eyes of the NFL draft fall on the quaint town of Mobile, Alabama. The 2023 Senior Bowl is right around the corner. With more than 30 athletes already committed to compete, here is a look at the first wave of offensive players that have accepted their invite.

An alpha at the catch point, Rice understands how to use his 6-foot-2 frame to consistently out-leverage corners when the ball is in the air. An explosive jumper who turns 50-50 balls into 80-20 catches, placing any corner on an island against him welcomes nightmares for opposing defensive coordinators.

While his aerial prowess is just another club in his deep bag of traits on the outside, what makes Rice’s skill set so projectable to the next level is his knack for finding ways to create separation no matter the alignment of the defensive back. The name of the game at wideout moving into Sunday football is the ability to consistently create separation and throwing windows for your quarterback. Some learn it over time, some never find their footing at all. For Rice, however, it comes naturally. And for a prospect who’s taken his lumps, become a veteran in the Mustangs locker room, and is now one of the nation’s top pass-catchers, the progression of his game has just begun to scratch the surface of his athletic potential.

One of the country’s elite athletes at the tackle spot, Duncan was in the conversation to be a top-15 pick just a few months ago. While the 2022 season hasn’t displayed the dominance we would have liked to see from the Maryland Terrapin, his stock could enter warp speed once again if he is able to show out at the Senior Bowl.

Division II’s all-time leader in passing touchdowns and the son of a former multi-time arm wrestling champion, Bagent could enjoy the biggest rise of any prospect in Mobile if all comes to fruition. He can create with both his arm and his legs. And if he passes the test when it comes to producing against high-level competition, look out.

A big, physical wideout, Hutchinson has been one of the country’s most productive pass-catchers since he transferred in from Blinn Junior College. At 6-foot-3, he can run every route in the book, is an alpha in the air, and will be a tall task to cover all week long for opposing corners.

The next product out of the NFL pipeline that is North Dakota State, Mauch has been arguably the most dominant lineman in the country in 2022. He plays a throwback style of football that will have offensive line coaches around the league drooling to get a chance to work with him.

Carson Wentz, Easton Stick, Trey Lance, Cordell Volson, Christian Watson, Mauch, and now Luepke—what a pipeline. Luepke is a modern-day weapon who will play the Michael Burton (Chiefs) role at the next level. His touchdown production is off the charts on the ground for the Bison, but his biggest test at the Senior Bowl will be in showcasing his hands out of the backfield and blocking both in the run game and in pass pro.

Man oh man, get to know Iosivas. A fluid athlete at 6-foot-3 who has the ability to kick into fifth gear at a moment’s notice, he has the chance to rise like Christian Watson did last year.

Mingo is a physically impressive talent. While Rebels wideouts Dontario Drummond and Braylon Sanders failed to impress last year, Mingo is a different level of receiver that has shown the ability to play both out wide and in the slot.

A shortened season hasn’t hampered Rodriguez Jr. one bit. In his sixth season within the Wildcats’ offense, he’s rushed for more than 100 yards in four of his six appearances and has been dominant whether Kentucky is running gap or zone principles up front.

A downhill runner who’s enjoyed five seasons of success in Boone, NC, Peoples is a well-rounded talent that will earn snaps in a variety of ways on Sundays. He won’t blow you away with physical tools, but he’s someone that isn’t afraid to stick his face in the mud in pass pro and his ability to do the little things well will earn him snaps at the next level.

Saldiveri hasn’t allowed a sack in 197 snaps in pass pro. For guys from small schools, NFL executives look for players that are overwhelmingly dominant, and the big 6-foot-6 anchor along the Monarchs’ front fits the script. We’ll get into the edge rushers he’ll face in Mobile in a future article, but success against guys like Tyree Wilson (Texas Tech) and Will McDonald IV (Iowa State) will send his stock into the stratosphere as a relatively unknown name to the public.

I want to see more from Bergeron—especially when it comes to moving bodies in the run game—but he’s an impressive athlete with ideal flexibility to succeed at the next level. Working on the finer details of the position and finding consistency will raise his stock.

Davis may be the fastest guy at the Senior Bowl. We saw Danny Gray (49ers) and Velus Jones (Bears) raise their stock in Mobile last year, but Davis is a guy that could round out his profile as much more than a special teams contributor in 2023.

Wilson does a little bit of it all for the Cardinal. He aligns out wide, he returns punts, and he can block his tail off in the run game. A well-built talent at 6-foot-2, he checks a ton of boxes for teams in need of someone that can wear multiple hats on offense.

The production hasn’t been there just yet for Wicks, but he’s got a ton of tools teams like in pass-catchers. Attributing his lack of success to Virginia’s offensive system is fair and I’m excited to see him compete in a neutral environment.

With snaps coming at both left tackle and right guard this fall, McClendon has succeeded no matter his alignment. He’s made it a habit of overpowering SoCon defenders the last three years, and a bump up in competition will provide a nice spotlight on his intriguing skillset.

An uber-competitive talent, I like the route that Senior Bowl director Jim Nagy has gone in inviting players that are versatile in how they succeed. Another talent on the list that also has experience on special teams (305 career snaps), Reed is one of the country’s premier deep threats who carries a ‘my ball’ attitude in the air—a nod to his 70% (7/10) contested-catch rate on deep shots.