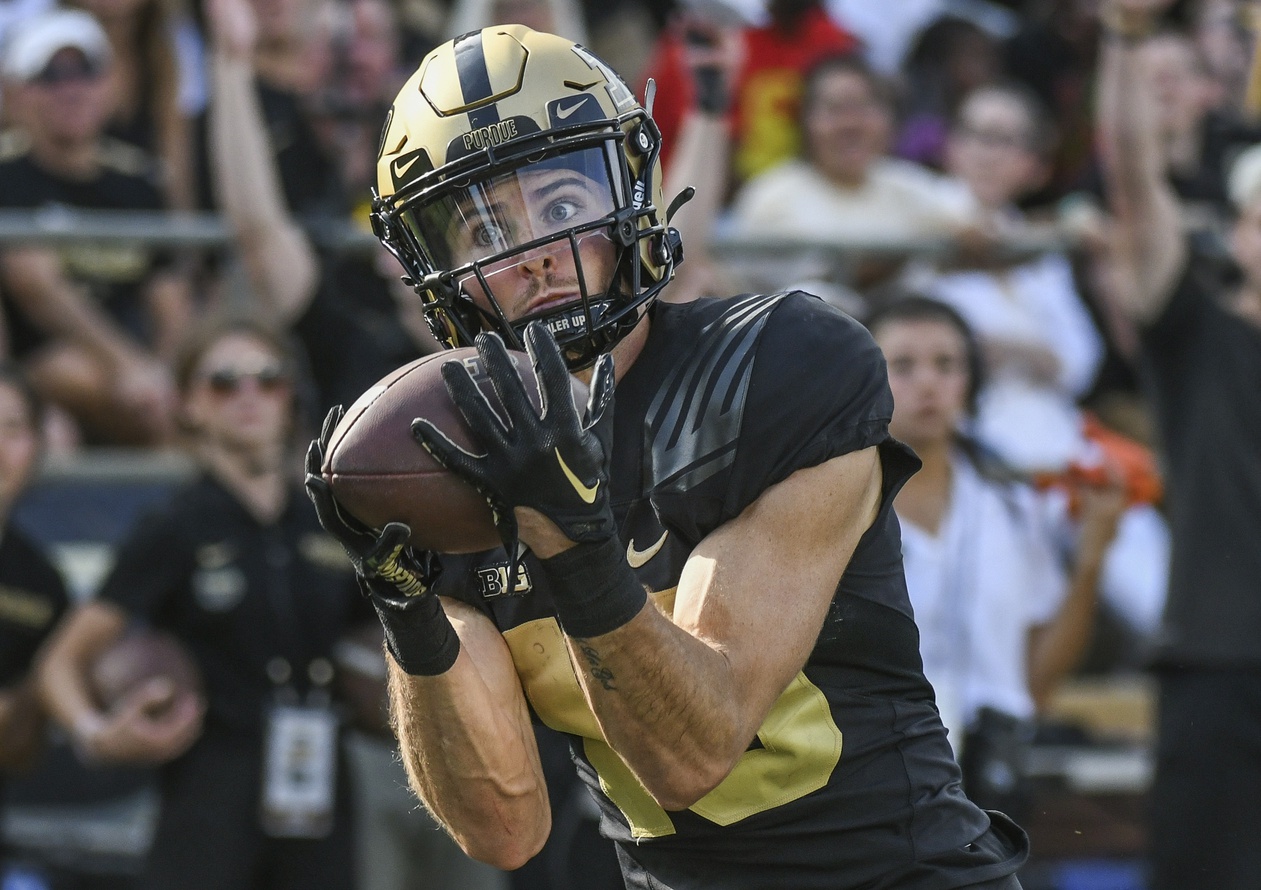 Senior Bowl 2023 WR Primer: What You Need To Know

A group of high-impact talent primed to light up the showcase event, the pool of wideouts set to take the stage in Mobile for the Senior Bowl is an enticing one. We here at Draft Network will have you covered from every angle starting next week live from the Senior Bowl, but with just days to go until pads begin to crack, here is a deep dive into the talented group of pass-catchers set to compete.

Bell has some Amon-Ra St. Brown to his game and I think he’ll shine at the Senior Bowl. The production wasn’t crazy in such a run-heavy offense, but falling into an offense that peppers three wideouts with targets should see Bell thrive. He’s got nice size at 6-foot flat, runs smooth routes, and displays the ability to make acrobatic catches away from his body in tight confines.

He recorded more than 600 snaps in the slot over the last two years, but where Davis will make his biggest impact is on special teams as a return man. He has All-Pro potential as a kick and punt returner. While special teams is consistently overlooked in our game today, players like Davis could be a core glue player for a team for a decade-plus.

Measurements will be big for Dell, who is expected to check in around 5-foot-9. However, he plays like a much bigger athlete. With long appendages, he eats up space and can snatch balls out of the air away from his frame. Calvin Austin III from Memphis was a Senior Bowl darling last year as a smaller wideout and I think Dell is the more well-rounded receiver of the two, if that tells you anything about how I expect him to perform.

Built like a modern-day tight end, it remains to be seen where Higgins will ultimately find his niche, but he can run like a wideout and offer unique matchups over slower safeties and smaller linebackers. Projected as an ‘F’ at the next level, while we can sit here and play hypotheticals toward his draft ceiling as a tight end, his prowess as a physically overpowering ‘X’ in the Cardinal offense has got us to this point in the first place. He can flat-out play on the outside and will be a chess piece in any offense he lands in.

He doesn’t get the necessary attention like some of the nation’s top pass-catchers, but Hutchinson can BALL. He’s been a staple of the Cyclones’ offense for three campaigns and he remains one of, if not the premier senior wideout in the country. A 6-foot-3 physically overpowering prospect, he led the Big 12 in all major receiving categories and would be a nice fit to complement any wideouts room.

A small-school stud, the former All-American in the Heptathlon touts one of the more explosive skill sets of any wideout that will be in attendance at the Senior Bowl. Facing a higher level of competition on the perimeter will only provide a cleaner look into who he is as a prospect. Uncoverable this fall at Princeton, he’s got size, speed, and the hands to rise significantly with a good week.

Many receivers would tell you they wish they were blessed with top-end burst or true game-breaking speed. For a majority, a lapse in one area often finetunes another. But for Jones, he’s blossomed as a talent that doesn’t just check boxes but bolds them when you flip on his tape. He faced Penn State’s Joey Porter Jr in Week 1 and Syracuse’s Garrett Williams in Week 3, and while the senior pass-catcher wasn’t shadowed by the two highly touted perimeter defenders for a full 60 minutes, denying his production would be silly. With 12 catches for 153 yards and a touchdown against the Nittany Lions and 11 receptions for 188 yards and a trip to paydirt against the Orange, teams just flat-out didn’t find a way to counter him in 2022. He’s expected to run in the low 4.4s at the combine and raise eyebrows in Mobile.

A physically impressive pass-catcher, Mingo’s powerful frame will force corners into a brand of football they may not be comfortable with. He has no issue hauling in passes at the line of scrimmage or 30 yards downfield and has the extra gear to scoot past secondaries on YAC opportunities. His nine-catch, 247-yard, two-touchdown performance against Vanderbilt was one of the more impressive single-game outings of any draft-eligible pass-catcher this fall.

An oily route-runner that understands the fine optics that go into creating separation, Nacua’s sure set of hands will become a popular target for Senior Bowl QBs. There’s nothing crazy sexy about his game, but I wouldn’t be surprised if he consistently trumps the 500-yard mark each and every year at the NFL level.

Expected to be one of the fastest players in the class, where I want to see Palmer succeed is in the intermediate areas of the offense when defenders are on his back. Long speed is fine, but he won’t be asked to run 9-routes on every rep. Showcasing his ability to win quickly will improve his stock.

A wiry-framed athlete at 6-foot and 185 pounds, Reed amassed nearly 2,000 yards receiving the last two years combined for the Spartans and has been one of the nation’s most productive deep-ball pass-catchers. He plays above his weight class at times and has no issue getting off the line and rising up over longer, stronger corners.

An alpha at the catch point, Rice understands how to use his 6-foot-2 frame to consistently out-leverage corners when the ball is in the air. An explosive jumper who turns 50-50 balls into 80-20 catches, placing any corner on an island against him welcomes nightmares for opposing defensive coordinators. While his aerial prowess is just another club in his deep bag of traits on the outside, what makes Rice’s skill set so projectable to the next level is his knack for finding ways to create separation no matter the alignment of the defensive back. The name of the game at wideout moving into Sunday football is the ability to consistently create separation and throwing windows for your quarterback. Some learn it over time, some never find their footing at all. For Rice, however, it comes naturally. I expect him to shine in Mobile.

Another pass-catcher expected to blaze in the 40, Tucker made his name living in the slot for the Bearcats and I expect him to do the same at the next level. He’s got electric feet at the line of scrimmage and is able to contort his body when throws are off-line. At 5-foot-9, extending a catch radius is important, and Tucker has a plus ability to track the football.

We saw former Jaguar standout (now Dallas Cowboy) Jalen Tolbert showcase well at the Senior Bowl last year, and representatives at South Alabama mentioned to me that they like Wayne’s game more than the 2022 third-rounder. Drops remain a concern, but his frame, athleticism, and red-zone prowess make him an intriguing talent.

Wicks remains one of the more interesting studies in the class. He’s got all the traits in the world to become as high as a WR2 in an offense, but putting it all together remains an internal battle teams will have to counter if they eye him as a weapon in their offense. His 1,201-yard campaign in 2021 showcased his potential, now it’s about meshing everything together and finding consistency in his game.

Wilson’s ability to play above the rim is elite. What also stands out is his natural hands—he secures catches away from his body. He missed the back half of the season this fall but should be good to go the entire Senior Bowl week. He has a red dot next to his name for me as a guy I want to see more of as a five-year contributor for the Cardinal.