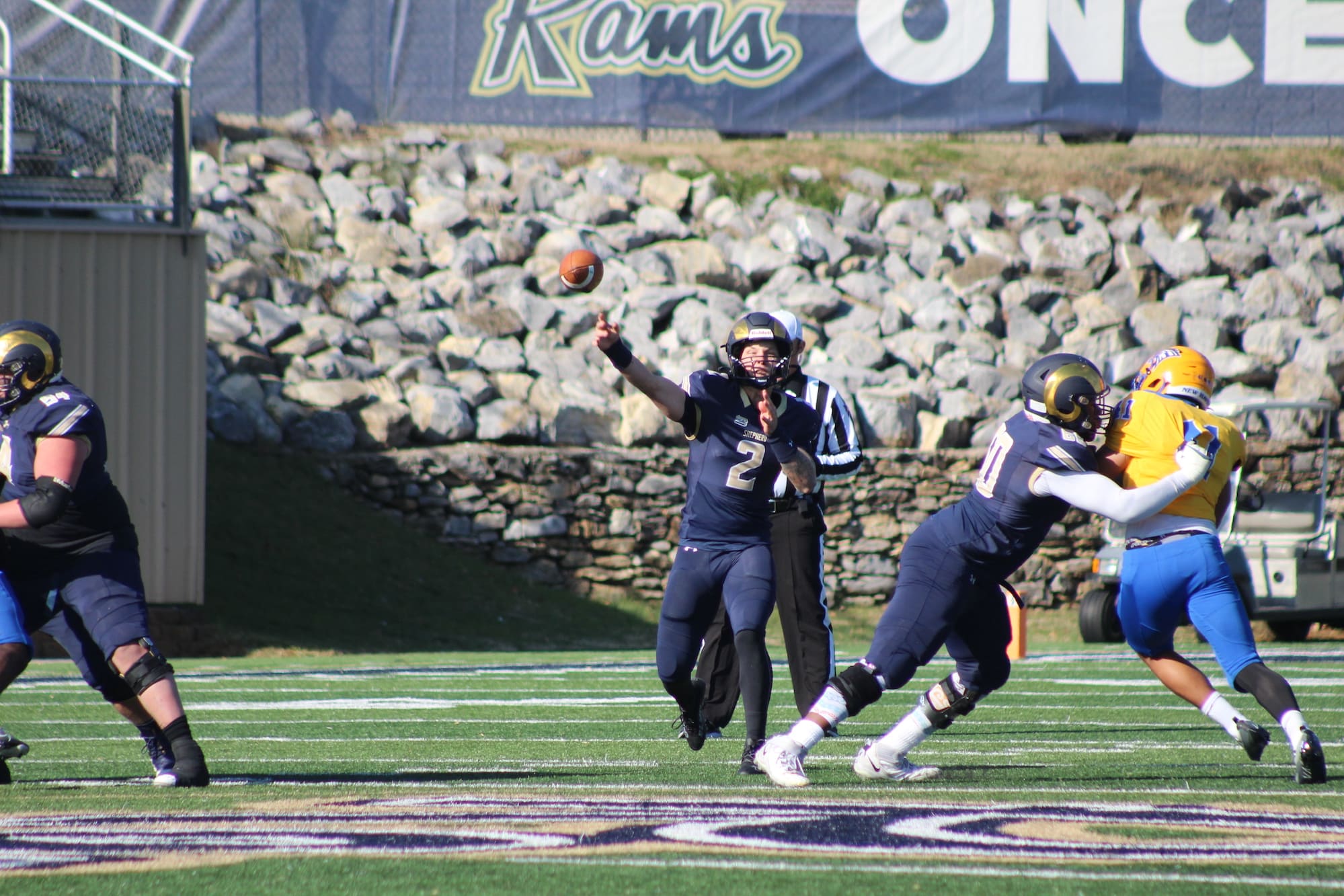 The 2023 Senior Bowl will provide an opportunity for NFL draft prospects to prove themselves on the largest pre-draft stage. Shepherd quarterback Tyson Bagent plans on taking full advantage. Bagent recently spoke exclusively with the Senior Bowl and Draft Network to discuss his motivation for accepting his invitation to compete in Mobile, Alabama.

A highly-decorated quarterback, Bagent threw for 5,000 yards and 53 touchdowns throughout a standout 2021 campaign, becoming just the ninth quarterback in college football history to reach the 5,000-yard, 50-touchdown club. Bagent followed that up by throwing for 4,580 yards and 41 touchdowns in 2022. Bagent isn’t your typical D-II quarterback. He’s firmly on the radar of 32 NFL franchises.

Bagent may be the Senior Bowl’s most intriguing talent. Bagent also discussed what he’s striving to prove to NFL general managers and scouts in attendance at the Senior Bowl, his approach to playing quarterback, and more. Let’s get to know Tyson Bagent a little better.

Tyson Bagent: Jim Nagy did an amazing thing. He came to our Wednesday practice at Shepherd and personally delivered the invite to me in front of the coaching staff and my teammates. It was a huge surprise after practice. My family and I really appreciated that.

My family was in attendance for that special moment. It was so exciting. I’m so thankful for this opportunity because I always knew this was going to be a big step for me throughout my pre-draft journey.

Tyson Bagent: I think the motivation for me accepting the offer was the realization that this was an excellent way for me to get my foot in the door. I wanted to get on the field with the level of athletes that most people say I’ve yet to play against at the D-II level.

The Senior Bowl is providing a terrific opportunity for me to showcase my abilities against collegiate athletes that are playing at the highest level. That was the motivation behind it all. That’s the main reason why I accepted the invite so quickly.

Tyson Bagent: I’m looking to prove that I have all the attributes, tools, and abilities necessary to play quarterback at the NFL level. I’m going to prove to everybody that I’m a leader. I’m ready to compete at that level both from a physical and mental perspective. I have the tools to develop into a successful NFL quarterback.

JM: It sounds like debunking the “small school” narrative comes to mind. The Senior Bowl is providing you with an opportunity to compete against D-I talent from conferences such as the SEC and ACC. That doesn’t happen for someone that played at Shepherd. It’s happening for you though.

Tyson Bagent: There’s no doubt about that. I’ve been very lucky with how my career has played out. I was in a terrific situation alongside the coaching staff at Shepherd. I appreciated how we ran our offense. I was able to lead the team and our offense on a yearly basis. I was able to win the starting job at a young age. I have a ton of experience.

I have the repetition. I have the numbers. I was able to put up the type of numbers that thankfully grabbed the attention of scouts around the nation. People at the highest level respect my game. I’m trying to prove those who know what I’m capable of right. And to those who are talking about the small school narrative, I’m looking to prove that I’m right on par with any quarterback in this class.

Tyson Bagent: No, it really doesn’t. That would be a mistake in my opinion. If you try to alter your approach, that’s when things can get inconsistent. You start worrying about the wrong things.

Ever since I’ve started capturing the attention of the NFL, I’ve taken it upon myself to approach and go about each day exactly the same. I work as hard as I can. I’m as mentally and physically ready as can be. I attack every day with my best. I know God has a plan for me. Whatever’s supposed to be, will be as long as I continue putting myself in good situations.

JM: A D-II quarterback hasn’t been drafted since 1999 (Chris Greisen). Shepherd hasn’t had a player drafted since 1960 (Bob Hogue). What comes to mind when I round off those facts?

Tyson Bagent: It’s pretty crazy. That’s a long time ago. To think that my name is being brought up in those conversations as the one to potentially end those droughts, it’s such an incredible feeling. I can be the next one after all these years.

There have been so many great quarterbacks to come from the D-II level. We’ve had so many great players at Shepherd University as well. It’s an honor. It’s extremely motivating for me. I want to be that breakthrough guy for us. I’m going to do the best I can.

JM: As a quarterback that had a ton of freedom within the offense, how do you balance being aggressive with taking what the defense gives you?

Tyson Bagent: I’ve always approached the game with a mindset to take every inch of what the defense gives me. You take what they’re willing to give. As long as you play fast and take advantage of those opportunities, the big shot plays and the aggressive plays will eventually come. It’s a smoother process.

You don’t need to stress about it. It will come naturally. You stress the defense by taking what they’re willing to give you. It wears them down.

Tyson Bagent: It’s going to provide the teams with a visual of me actually being on the field alongside these D-I talents. These are the people they say have a leg up on me based on where they played college football. I’m going to prove that I belong. I’ll fit right in on that field. I’m exactly where I’m supposed to be.

Tyson Bagent: I’m a big fan of all NFL quarterbacks (laughs). I can’t imagine being in a game or situation where I wouldn’t be excited to play against another NFL quarterback. I’d love to swap jerseys with any of them. I can’t name a quarterback that I’m not a fan of. They’re all exciting in my eyes.

JM: What does a successful Senior Bowl week look like for Tyson Bagent at the conclusion of the week?

Tyson Bagent: It would mean I took advantage of the opportunity that was given to me. I was mentally sharp throughout. I was a great player to coach. I listened to instructions and I was sharp on the field. I got better and I was coachable. That would be a successful week for me. I’m really looking forward to it.