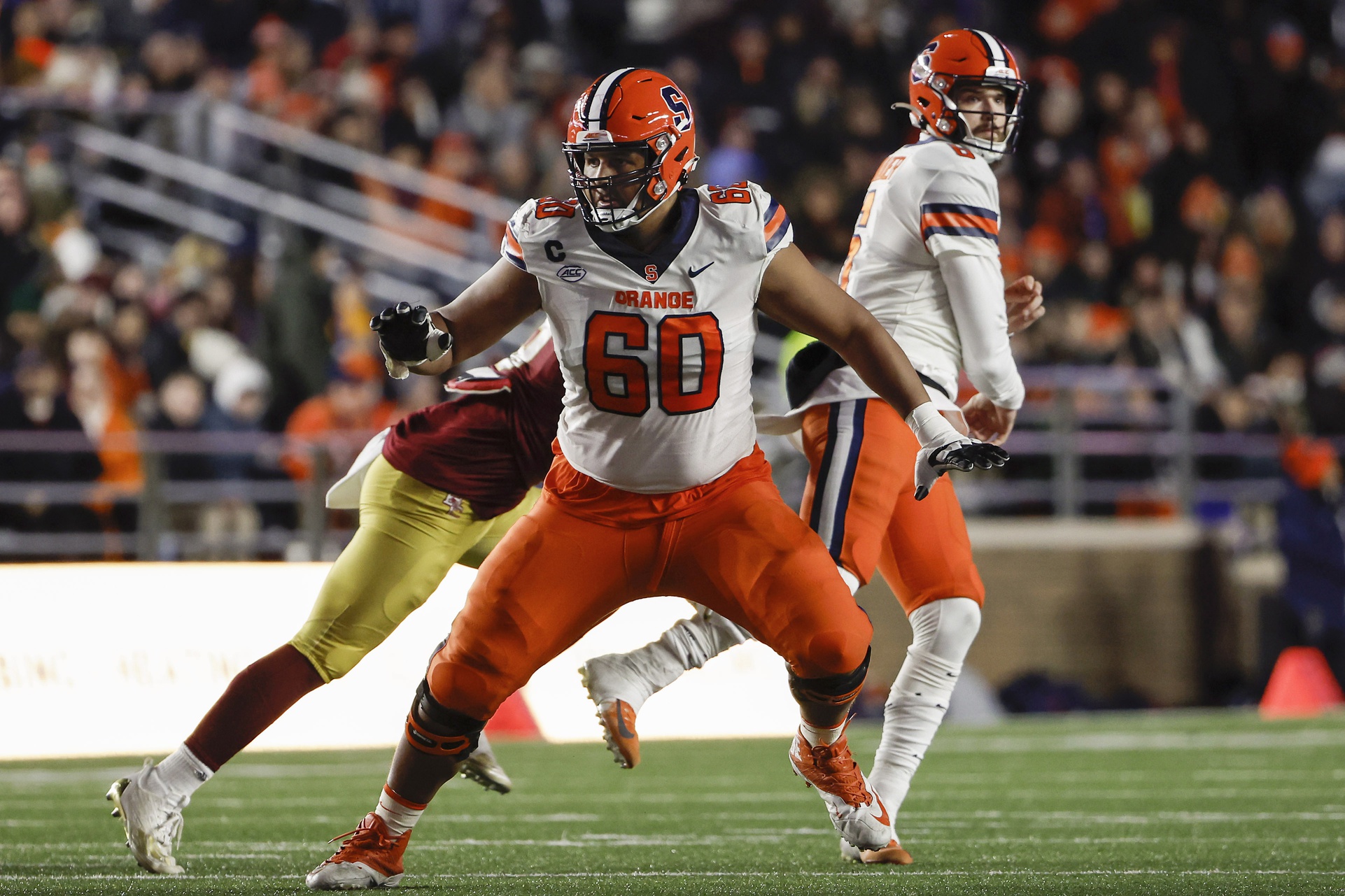 The 2023 Senior Bowl will provide an opportunity for NFL draft prospects to prove themselves on the largest pre-draft stage. Syracuse offensive tackle Matthew Bergeron plans on taking full advantage. Bergeron recently spoke exclusively with the Senior Bowl and Draft Network to discuss his motivation for accepting his invitation to compete in Mobile, Alabama.

Bergeron also talked about what he’s striving to prove to NFL general managers and scouts in attendance at the Senior Bowl, his ability to play both left and right tackle, and more. Let’s get to know Matthew Bergeron a little better.

Matthew Bergeron: I was actually in our cafeteria. Coach [Dino] Babers’ assistant asked me to meet him in his office. I was like, what did I do? Am I in trouble? (laughs). That’s when he handed me the Senior Bowl invite. I was so excited. It was a great moment for me, especially with my background and story. I come from Canada. This is a huge moment for me.

My entire coaching staff was so excited for me. They saw me progress as a player. They know how hard I worked to achieve improvement. It was a great moment for all of us.

JM: Not a lot of Canadians get to play in the Senior Bowl. It’s a huge achievement for you.

Matthew Bergeron: Right. The last one I can remember was Benjamin St-Juste. He balled out at the Senior Bowl. He’s from Quebec as well. I’m just trying to follow in his footsteps. I plan to make the most of this opportunity.

Matthew Bergeron: I’m excited to compete alongside some of the best athletes in the nation. There’s a great group of pass rushers going to the Senior Bowl. I’m ready to compete. That’s where I’m finding motivation. I’m excited to prove that I’m able to hang alongside those guys.

JM: Who are some of the rushers you’re looking forward to competing against at the Senior Bowl?

Matthew Bergeron: I’ve played against a few of them already. The kid from Clemson [K.J. Henry] is a good one. I’ve played against the Notre Dame guys [Isaiah Foskey] as well. I’m also excited to play against certain rushers for the first time. I’ve heard great things about this year’s group of rushers. I’m going to prove that I’m capable of competing at the highest level.

JM: Expanding on that, what are you looking to prove to NFL general managers, coaching staffs, and scouts in attendance in Mobile?

Matthew Bergeron: I’m just trying to showcase what type of person I am. I’m the ultimate competitor. I’m a great teammate first and foremost. The guys love being around me. I’m excited to showcase my leadership. I’m a hard worker. I want NFL decision-makers to become familiar with Matthew Bergeron the person.

JM: You’re highly experienced playing both left and right tackle. They’re different. Which side do you see yourself playing on at the next level?

Matthew Bergeron: My dream is to play the left tackle position. Obviously, I’d be willing to play right tackle as well. I’m a competitor at the end of the day. My pro team will ultimately make that decision. I’m going to put my best foot forward. If I get thrown in at right tackle, or even kicked inside to guard, I’m ready to compete. My dream would be to play left tackle though.

JM: That makes sense. You started five games in 2019 and have been an every-game starter ever since. What is it about your personality and skill set that allowed you to contribute from such a young age?

Matthew Bergeron: It proves that I’m a quick learner. I’m always eager to learn because I’m a competitor. Ever since I stepped foot on campus at Syracuse, even though I was Canadian and had a different background in football with the Canadian Football League (CFL), it just showed how quickly I picked up the game and our scheme at Syracuse. I think it said a lot about my ability to learn on the fly.

JM: It sure does. When we turn the tape on, we see a blocker with excellent body control and mobility. How did you develop those aspects of your game?

Matthew Bergeron: I have to give that credit to Syracuse. We have such a fantastic strength and conditioning staff. They’ve been working with me since I arrived on campus. The coaching staff got me up to speed. We always got my body in the right place to make sure I was able to play four years at Syracuse.

I’ve played a lot of football but I’ve been extremely healthy. That’s a testament to the way I take care of my body and how the Syracuse staff has prepared me. We have a great training room and strength staff. I was ready when I made my first start and I’ve continued to grow as a player throughout the years. It’s a testament to my hard work.

JM: There’s no denying that. Would you say your game is more developed as a pass protector, or as a run blocker at this point in time?

Matthew Bergeron: I think I’m a pretty balanced player. If you were to ask me which one I prefer, I’d probably say run blocking. I’m a balanced prospect that’s comfortable with both. I just prefer the run game because I love the contact. I can get into my steps and roll. I love dominating in the run game. That’s something I look forward to.

Matthew Bergeron: I’m excited to show out against the best rushers. We’re going to see a tremendous group of rushers in Mobile this year. There are some big names at the Senior Bowl. This is the only pre-draft event that could offer this type of competition.

Matthew Bergeron: I have to shout out my family over at my agency Rep 1. Guys like Cody Mauch, Jaren Hall, and Luke Musgrave. I’m training with my guys right now. I can’t wait to see our hard work pay off. I’m going to those guys in the NFL and we’re going to talk about the memories we made. I’m excited to swap jerseys with them.

JM: Those are some excellent choices. At the end of the week, what does a successful Senior Bowl week look like for Matthew Bergeron?

Matthew Bergeron: At the end of Senior Bowl week, I’m going to feel like I put my best foot forward. I tried my best. I stayed true to myself and showcased the best version possible of Matthew Bergeron.