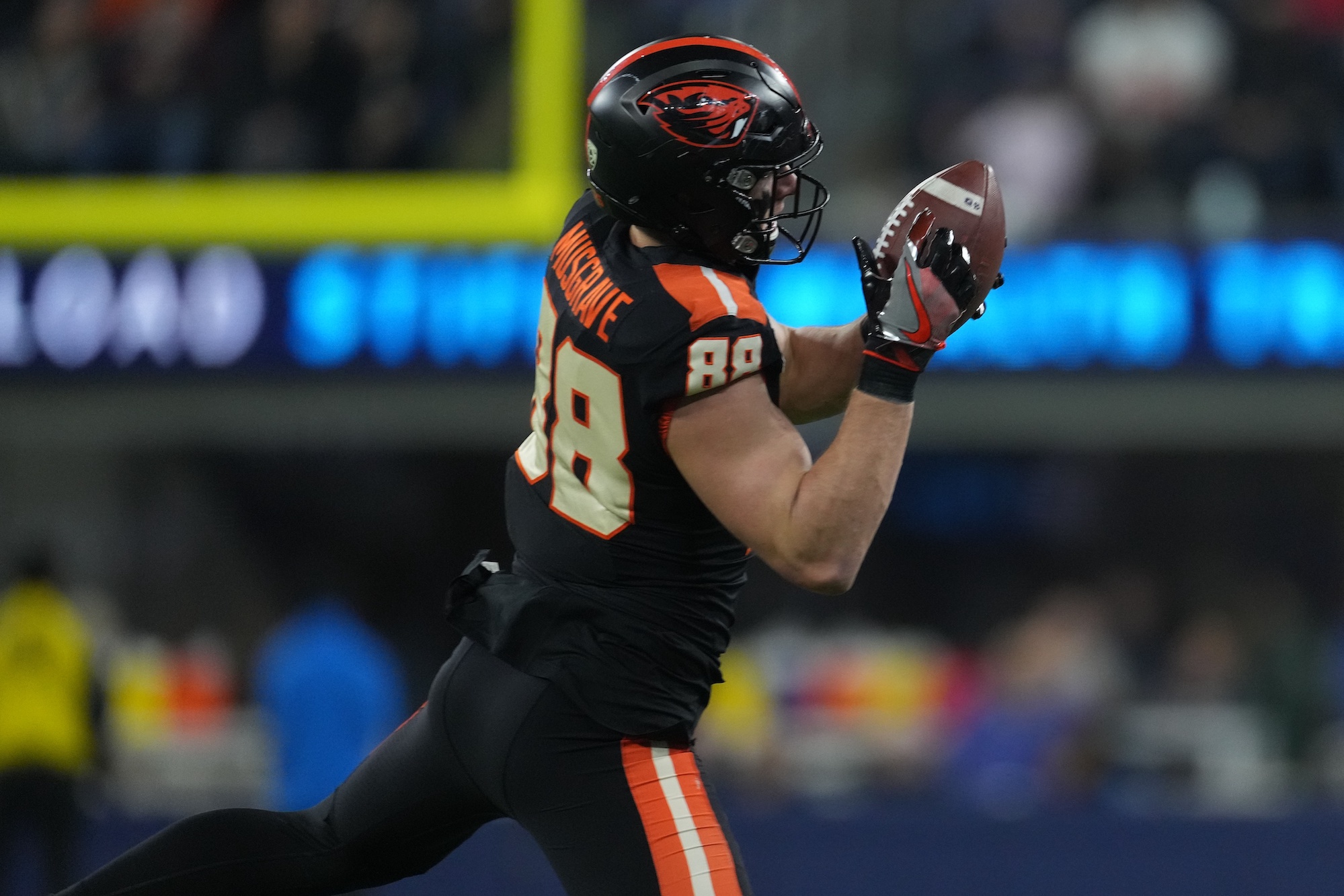 The 2023 Senior Bowl will provide an opportunity for NFL draft prospects to prove themselves on the largest pre-draft stage. Oregon State tight end Luke Musgrave plans on taking full advantage. Musgrave recently spoke exclusively with the Senior Bowl and Draft Network to discuss his motivation for accepting his invitation to compete in Mobile, Alabama.

Musgrave also talked about what he’s striving to prove to NFL general managers and scouts in attendance at the Senior Bowl, his favorite routes to run, and more. Let’s get to know Luke Musgrave a little better.

Luke Musgrave: I was actually hanging out with the guys in our equipment room. They told me that I had a package waiting for me (laughs). I didn’t know what it was at first, but they sorta hinted at it (laughs). I quickly found out that it was my invite to this year’s Senior Bowl. It was an awesome moment. It was very exciting for me.

Luke Musgrave: I only played two games this season. The goal was to be back and 100% healthy for the Senior Bowl. I set that goal for myself when I suffered my injury. It helped motivate me to get back on the football field one last time as a pseudo-college football player. I get an opportunity to represent Oregon State at the Senior Bowl as I prepare to make the transition from college to the NFL. I’m excited to showcase what I can do.

Luke Musgrave: I’d like to prove that I’m still the same player, if not better, than I was before my injury. I’m 100% healthy and ready to compete. I’m going to put the full range of my skill set on display. I also want to prove that I’m a versatile player. I’m not just a pass-catching tight end. I’m a blocking tight end as well. You can move me around the formation because that’s where I really shine as a player.

JM: We can’t wait to watch you perform. Are there any fellow Senior Bowl attendees you’re looking forward to competing alongside?

Luke Musgrave: I’m training with a bunch of guys that are going to be in attendance. Guys like Matthew Bergeron, Blake Freeland, and Jaren Hall all come to mind. We’re all signed to Rep 1 agency and we’re all going to the Senior Bowl. I’ve been watching those guys get better every single day. I’m excited to see them shock everyone at the Senior Bowl. There’s going to be some amazing competition in Mobile.

Luke Musgrave: I just love the versatility that comes with it. You’re not just a receiver. You’re not just an offensive lineman either. You’re a little of both. You have to do both of those at an extremely high level. You have to be able to block these pass rushers that are getting paid millions of dollars to sack the quarterback. You also have to defeat guys in coverage that are getting paid millions of dollars to cover wide receivers. You really have to do both.

JM: You sure do. You’re an extremely nuanced route runner. Do you have a favorite route to run?

Luke Musgrave: We called it the “bridge” route in our offense at Oregon State. It’s really an over [route] but you decide the route based on the zone. You stem the safety, whether it’s two-high or one-high, that depends on where you stem, and based on how they rotate or what they play, you create your break off of that.

You’re able to showcase your speed with this route, which I really enjoy doing. You’re also allowing the coverage to dictate your decision on the fly. You have to be able to read opposing defenses as the route progresses. You have to put yourself in the best position possible to make a play on the ball.

JM: That’s an excellent, thorough answer. I can talk ball with you all day. You’re listed at 6-foot-6, 250 pounds. What are some of the ways you use your tremendous size to your advantage?

Luke Musgrave: It certainly helps me in the run game. I was the same height coming into college, but I was about 237 pounds during my freshman season. I was working hard just to get to 240 pounds.

I remember playing against our first-string defense. I was getting plowed over all the time (laughs). Adding the weight really helped me in the run game. It also helps me as a pass catcher. I put on so much weight in the form of muscle. It made me a more powerful runner. I’ve gotten faster. I’m better at the point of attack because I’m stronger. I can box out defensive backs. Adding weight helped me in all facets.

JM: We saw that on tape. It sounds to me like you’re really excited to prove yourself as a tight end that can block at the Senior Bowl.

Luke Musgrave: It absolutely is. My tight ends coach Brian Wozniak at Oregon State is a block-first type of position coach. He wanted us to run routes secondly. From day one, he made me get in the trenches and block. I’ll be honest with you. I wasn’t a huge fan of it during my freshman year.

As I’ve improved, I’ve started liking it more. That happened naturally for me. It’s an acquired taste. Now I can’t get enough of it. I’m going to continue fostering my love of blocking. It’s become a passion of mine. Coming into it, it wasn’t that. I enjoy it now. I know I can get better. I’m willing to improve as a blocker because it’s such a fun part of the game.

JM: We love that. You possess serious NFL bloodlines. Your uncle Bill Musgrave played in the NFL as a quarterback and has been an offensive coordinator for numerous teams. Your father Doug Musgrave played quarterback at Oregon. What’s the biggest lesson you’ve learned growing up in a football family?

Luke Musgrave: My dad coached youth football. He either coached my team or my brother’s [Colt Musgrave] youth team. That was the case until around the seventh grade. You learn so many lessons playing football. It really helps you out in life. From toughness to character, hard work, and dedication, I’ve learned so many valuable lessons along the way.

One thing I hold near and dear to my heart is the toughness aspect. My dad always told me to never lay down on a football field unless you physically can’t get up. As long as you can stand, never lay down. I’ve never laid down on a field. I take pride in that.

Granted, I’ve been blessed to avoid a major injury. I’m very thankful for that. I’ve never laid down due to physical exhaustion.

JM: That’s incredible. What can you accomplish at the Senior Bowl that you can’t at other pre-draft events?

Luke Musgrave: I love that we’re going to play football. The NFL Scouting Combine will showcase our athleticism and overall speed, but it’s not in a football setting. I think I shine the most when I can go out there and let loose. I’m going to have a bunch of fun in a football setting. I’m excited to play against other competition. That’s where I’ll shine. I’m going to play football and have fun. I’ll put my skill set on display.

Luke Musgrave: There are a lot of them. The big-name tight ends come to mind. Travis Kelce and George Kittle. Hopefully, I can establish myself as an elite tight end and achieve that status while they’re still in the league. My former teammate and tight end partner Teagan Quitoriano plays for the Houston Texans. He was drafted last year. I’d love to swap jerseys with him. He’s a great guy.

We played together for four years. We were on the field a lot together in two tight end sets for two of those years. I look up to Cade Otton a bunch too. I watched a lot of his film as I was coming up in college.

JM: Those are some excellent choices. At the end of the week, what does a successful Senior Bowl week look like for Luke Musgrave?

Luke Musgrave: I’m going to leave the Senior Bowl knowing that I put my best foot forward. I went out there and gave 100% effort. I’m going to have fun doing it. I play my best when I’m relaxed and having fun. That’s going to be my approach. I know I can do what I’m capable of doing.

I’ll leave Mobile knowing I did everything I could do. I left everything out there on the field. That’s what a successful Senior Bowl looks like for Luke Musgrave.