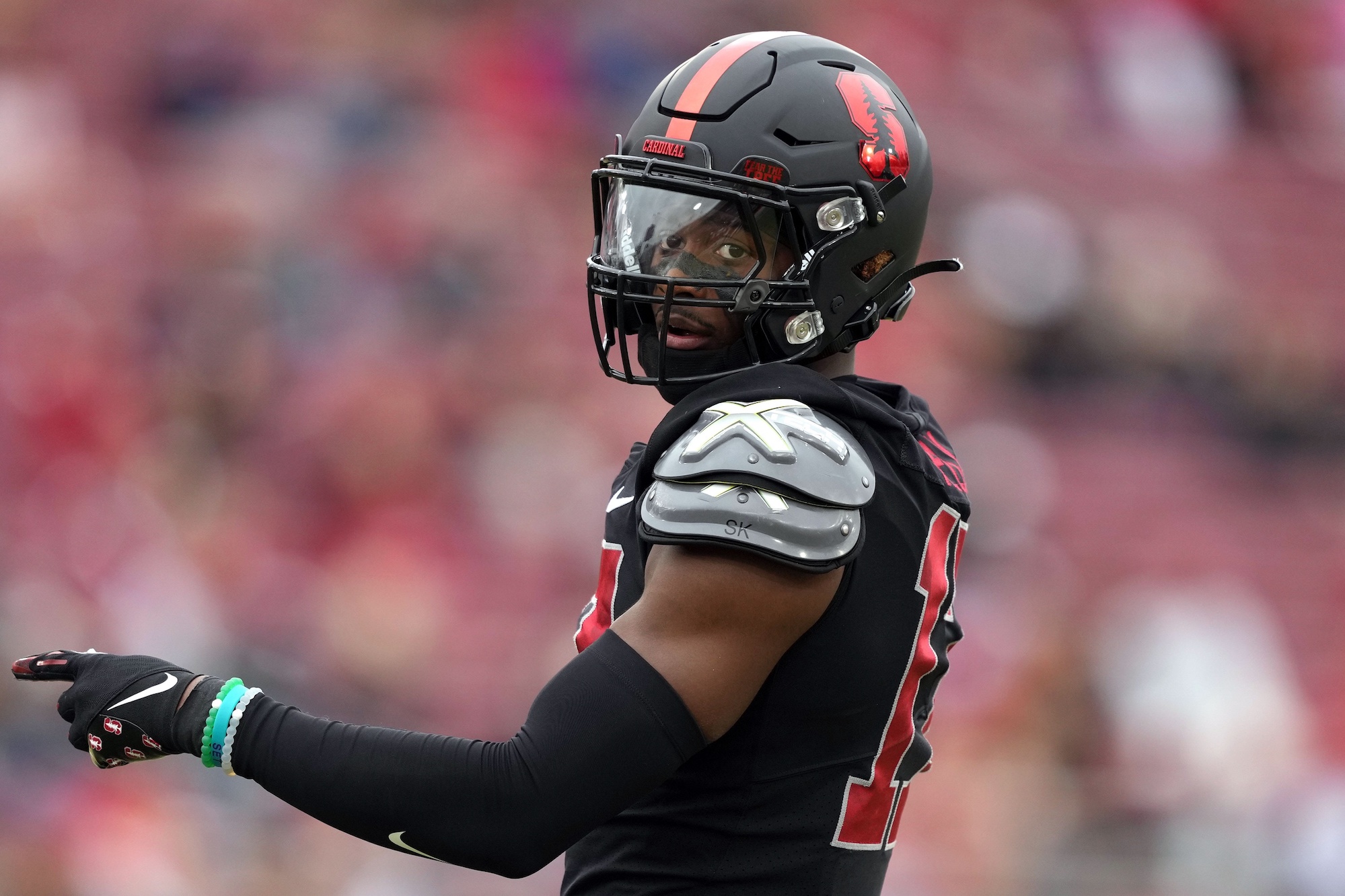 The 2023 Senior Bowl will provide an opportunity for NFL draft prospects to prove themselves on the largest pre-draft stage. Stanford cornerback Kyu Blu Kelly plans on taking full advantage. Blu Kelly recently spoke exclusively with the Senior Bowl and Draft Network to discuss his motivation for accepting his invitation to compete in Mobile, Alabama.

Blu Kelly also talked about what he’s striving to prove to NFL general managers and scouts in attendance at the Senior Bowl, his favorite coverages, and more. Let’s get to know Kyu Blu Kelly a little better.

Kyu Blu Kelly: I was at practice. Coach David Shaw made the announcement in front of the whole team after practice. It was a blessing to be recognized for everything I’ve done throughout my time at Stanford. I have a bunch of teammates that have done the same thing and we got to share that moment together. We were really grinded this offseason and I’m not the only player from Stanford that’s scheduled to be in Mobile.

My dad [Brian Kelly] is a Senior Bowl alum himself so it was even better. He was really excited for me. It was an awesome moment for my entire family.

JM: Wow, that’s amazing. I imagine his excitement added to your motivation for accepting the Senior Bowl’s offer.

Kyu Blu Kelly: He was thrilled. He’s always talked about the importance of the Senior Bowl. Once I became a senior myself, we knew getting an invite was a goal of mine. He was super proud of me.

And yeah, my dad’s excitement was one of my main motivators behind me accepting the offer for sure. It’s a legacy-defining moment for my family. I’m playing in the same game he did, and we play the same position as well. I’m taking the same path my dad took and that’s really cool for me.

The opportunity to perform alongside some of the top talent in the nation in front of a bunch of NFL coaches is certainly an added bonus. Saying yes to the Senior Bowl was a no-brainer for me.

JM: That’s so awesome. What are you looking to prove to NFL general managers, coaching staffs, and scouts in attendance in Mobile?

Kyu Blu Kelly: Whatever they think I can’t do, I feel like I can do (laughs). I’m excited to answer any questions they have about me. Whether it’s learning a new scheme or competing at a high level, playing press coverage, playing off-man coverage, or showcasing the mental strengths of my game.

I think I’m really going to help myself in Mobile. They’re getting more than what they see from me on film. I want them to evaluate me in person as a player that can fit their team at the next level.

Kyu Blu Kelly: I feel like you can ask any cornerback that question and we’re going to say man coverage (laughs). Competitively, I want to play man-to-man. I don’t need any help. It’s me against you and may the best man win. Man-to-man coverage is always the more fun option.

Zone coverage also allows me to incorporate some film study into my game. There’s a scheme study involved. That’s where you can make plays on the ball and create more turnovers. You can get a better overall feel for the quarterback in zone.

JM: We love a cornerback that can play man coverage. When in man coverage, do you approach a bigger, more physical receiver differently than you do a smaller, shiftier one?

Kyu Blu Kelly: Yeah, I definitely do. It depends more on their releases. A big guy can sometimes move like the little guys and vice versa. There are rare talents who are capable of that. Really, you want to study their releases and how they come off the ball.

With bigger guys, I feel like you want to beat them with speed. Sometimes you try to get your hands on a big guy like D.K. Metcalf and he can swipe your hands off of him. He’s huge (laughs).

A Tyreek Hill type, you want to get your hands on him as quickly as possible. If you give him a clean release and he gets up to speed, it’s going to be a track meet, and you don’t want that with him.

You play with your feet or with your hands based on the stature of your opponent. If you get a guy like Davante Adams who has the height but isn’t necessarily the biggest guy, but he’s not small either, his release package is amazing. You have to switch it up with him. You can’t give the same thing every single time.

JM: I love how detailed that answer was. I’ll put you in another scenario. Say it’s 3rd-and-long with the game on the line. Would you prefer to be manned up on the opposing team’s best receiver, or playing zone coverage with a chance to make a play on something near the sticks?

Kyu Blu Kelly: Wow, that’s an awesome question. It depends on their offensive scheme. If they’re a sticks team, I would love to be in the zone, sitting at 10-to-12 yards of depth, and try to rob the curl route and take it to the house for a pick-six touchdown.

If they’re taking a shot, let’s go play press coverage. Maybe I can press-bail and toy with them a little bit and try to get an easy interception.

It ultimately depends on their scheme. If they’re a sticks team, I want to play off on something near the sticks. If they’re a shot team on third down and I’m in the alumni zone, they’re really trying to win the game with a shot play, I rather play man coverage and maybe mess with them through a press-bail look. I can trust my technique in either scenario.

JM: That’s an incredible answer. What can you accomplish at the Senior Bowl that you can’t at other pre-draft events?

Kyu Blu Kelly: The Senior Bowl is one of the best ways to improve your pre-draft stock. I mean, you’re getting hands-on coaching from the staffs that are going to coach you at the next level. They’re seeing you in person. You can take away so much more from that as opposed to just watching a guy on film.

Word of mouth, scouts visiting practice, it doesn’t always do it justice. Let’s do it live in person. This is actual NFL coaching. They’re going to see you and eventually coach you in the NFL. That hands-on coaching can be the difference for a team that decides to draft you. It means that much more.

Kyu Blu Kelly: I think my versatility helps. I’d say I’m an outside cornerback primarily, but I have no problem kicking inside and playing the nickel. I had a lot of doing that at Stanford throughout the duration of an entire season. I played a lot of nickel in zone coverage looks.

I played closer to the ball. There’s a mental aspect involved with that. You’re dealing with more run-gap fits and things of that nature. You’re sealing edges and making sure you’re getting your spot drops. I was switching it up between the nickel and playing boundary corner on a snap-by-snap basis.

JM: You’re such a versatile chess piece. Are there any players in particular that you’re looking forward to competing with and against at The Senior Bowl?

Kyu Blu Kelly: The receiver talent is excellent this year. You have a few guys from SMU [Rashee Rice] and TCU [Derius Davis]. You have a guy from Iowa State [Xavier Hutchinson] who’s pretty good. I don’t really want to name-drop anybody because I feel like it’s a competitive group all around. We’re going to have a bunch of fun in Mobile.

JM: It’s an excellent group. Is there a player in the NFL you’re looking forward to eventually swapping jerseys with?

I’ve been in contact with Stephon Gilmore throughout my time at Stanford. I’d love to swap jerseys with Gilmore. Of course, Jalen Ramsey comes to mind as well. There are so many guys, but those are my top three.

JM: Those are excellent choices. At the end of the week, what does a successful Senior Bowl week look like for Kyu Blu Kelly?

Kyu Blu Kelly: I want coaches to sign off and say Kyu Blu Kelly is a heck of a football player. He’s everything we expected. I’m looking to meet, or exceed expectations at the very minimum. I never want to be below expectations.

A successful Senior Bowl would include people thinking I’ve proven myself as a player. Kyu Blu Kelly is the player we thought he was.