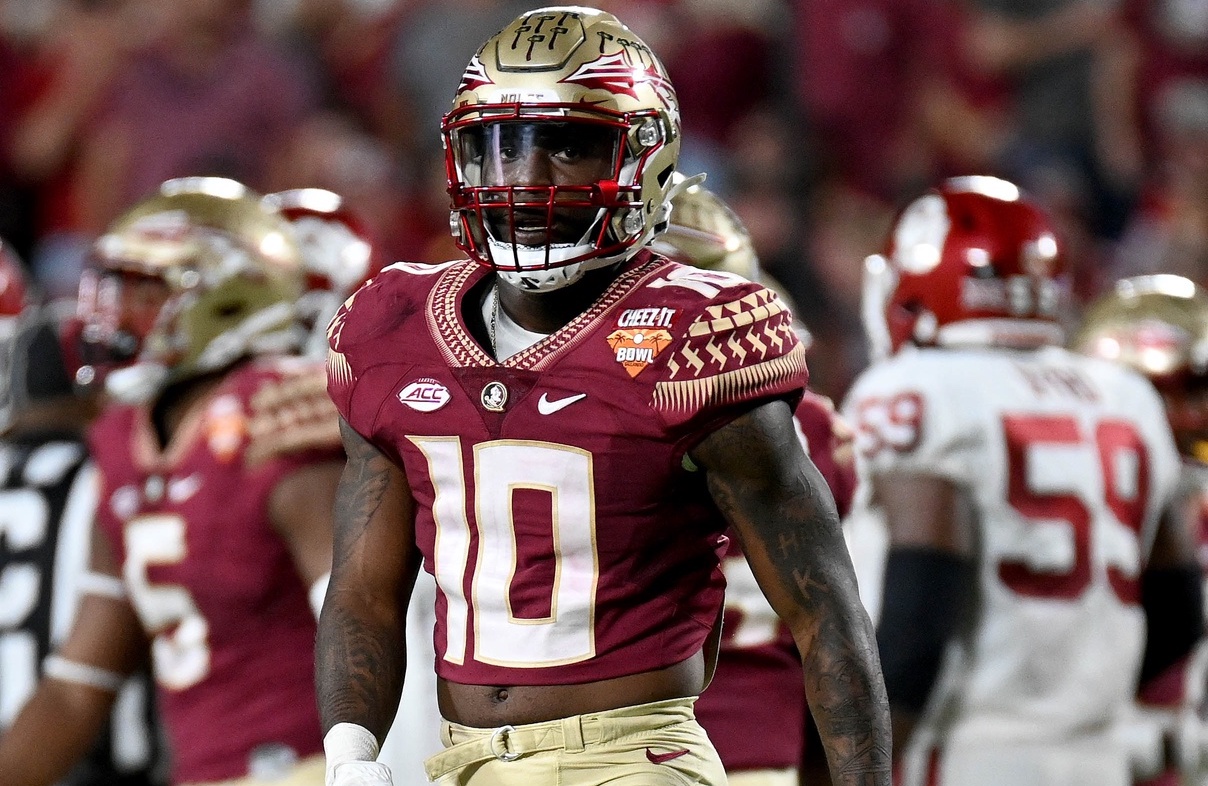 The 2023 Senior Bowl will provide an opportunity for NFL draft prospects to prove themselves on the largest pre-draft stage. Florida State safety Jammie Robinson plans on taking full advantage. Robinson recently spoke exclusively with the Senior Bowl and Draft Network to discuss his motivation for accepting his invitation to compete in Mobile, Alabama.

Robinson also talked about what he’s striving to prove to NFL general managers and scouts in attendance at the Senior Bowl, his versatility in coverage, and more. Let’s get to know Jammie Robinson a little better.

JM: Where were you when you found out about your Senior Bowl invite and what was your initial reaction like? What was your motivation for accepting the Senior Bowl’s offer?

Jammie Robinson: I believe I was in the film room breaking down tape of our upcoming opponents. I received the news when I left that film session with some of my teammates. Hearing that I was going to receive another opportunity to showcase my abilities was a blessing. I’m going to display my skill set in front of NFL coaches.

I’m continuing to live out my dreams. My dream is to play in the NFL for a long time. The Senior Bowl has recognized me as one of the top seniors in the nation. I can’t thank them enough for that. It’s a blessing. I’m hungry and ready to maximize every opportunity that comes my way in Mobile.

Jammie Robinson: I’m looking to display who Jammie Robinson is as a player and person. I’m just going to be myself. I don’t know how to be anybody else. I’m ready to show everybody that I’m the real deal.

I don’t understand why everybody is sleeping on me. I’ve been underrated for so long. My game is going to speak for itself in Mobile. I’m just ready to get in front of these general managers, coaches, and scouts. I’m going to show them that I’m a coachable player. I’m a versatile guy that can play multiple positions.

I can line up anywhere and get the job done. That’s my main goal. I’m excited to showcase my versatility and football IQ. I’m a student of the game. I’m a team-first guy. I can lead by example. That’s who Jammie Robinson is. I’m going to be myself.

JM: We love your mindset. When we turn the tape on, we see a versatile defender that plays free safety, in the box and as a nickel. You touched on your versatility. What is it about your skill set and approach that allowed you to play multiple roles?

Jammie Robinson: I’ve played every position there is to play. I even played some quarterback and running back growing up before I moved to safety. I’ve played some cornerback as well. That’s just who I am. I’m a football player at the end of the day. I can do it all.

I think back to middle school, high school, and college. I went to two different high schools and colleges. I was always able to adapt to my surroundings. I’ve always shown that I’m the real deal. If a guy got hurt at a certain position, my coaches always knew I could make a flawless transition and help the team out.

You can count on Jammie Robinson to make plays at any position. I made plays all over the field. There’s been a purpose to every position I’ve played. That’s my main thing. I made a lot of plays when I was in the box and near the line of scrimmage. I can also lock it down when I’m playing in the deep-third or in man-to-man coverage.

That’s all I’m trying to showcase. I’m a football player, period. Wherever the coaches want me to play. I’m going to put my best foot forward and be the best version of myself at that position.

Jammie Robinson: I love knowing what the offense is going to do before they do it. I always understood our coverages. I always knew what offensive schemes could give us based on the coverage shells we were in.

We’re in Cover 4. I knew what route concepts opposing offenses were going to give us in Cover 4. I’m a student of the game. When I’m playing safety, I know I can read what’s happening in front of me. I can get to the line of scrimmage quickly. I’m going to make that tackle within two-to-three yards.

I’m a ball-hawk. I can come downhill and cover in the slot. If we’re in Cover 3, I might line up against a slot receiver or tight end. That’s not a problem for me. I’m going to be there. If you need me to play nickel, I’m going to play nickel.

I’m just a football guy. I love this game. I feel like I’m going to be playing this game for a long time.

JM: We share that sentiment with you. You touched on playing at two different programs. How do you look back on your decision to transfer from South Carolina to Florida State?

Jammie Robinson: I decided to transfer because the coaches that initially recruited me at South Carolina got fired. I committed to coach Will Muschamp and his staff coming out of high school. Being a young guy coming in, I always felt like I was committed to my coaches. I made a promise to a coaching staff that was no longer there.

I ended up at FSU. I accepted the blueprint that was laid down for me by [defensive coordinator] coach [Adam] Fuller. I love what the defensive staff at Florida State gave me. They immediately showed me their plans for me in their defensive scheme.

Going from my first year into my second year at FSU, I started blitzing a lot more. I played on the edge more. I played near the line of scrimmage a ton. They put me in positions to make plays.

I didn’t win anything at South Carolina. We helped rebuild the program at Florida State. My first year at FSU was a rebuilding year. We went crazy in my second year (laughs). I felt like we won a Super Bowl. It was a great season.

I ended up graduating and now I’m living my dream as I go through pre-draft training in Arizona. I’m working out and training every single day. We’re working and preparing for the Senior Bowl.

JM: You’re attacking the process. What can you accomplish at the Senior Bowl that you can’t at other pre-draft events?

Jammie Robinson: I’m going to wake everybody up. I think NFL general managers are going to be very impressed with me in Mobile. I’m ready to wake these NFL teams up. NFL coaches are going to notice me. Let’s wake up these NFL scouts. That’s what I’m about to do.

I always had to fight through that. Everything I have, I earned it. It came out of the mud. I had to work hard for it. I just want to get to Mobile and show everybody how us small-town kids play (laughs). I created something for myself. I have that chip on my shoulder. I know what I’m capable of. I’m ready to get in front of these NFL decision-makers and show everybody why I feel this way.

JM: That’s an excellent choice. At the end of the week, what does a successful Senior Bowl week look like for Jammie Robinson?

Jammie Robinson: Whichever receivers everybody has at the top of their big board, line them up (laughs). Let’s line them up. You know how those mock drafts go. Everybody you have ranked at the top, line them up. That’s it. Point blank, period. I want to square off with the best.