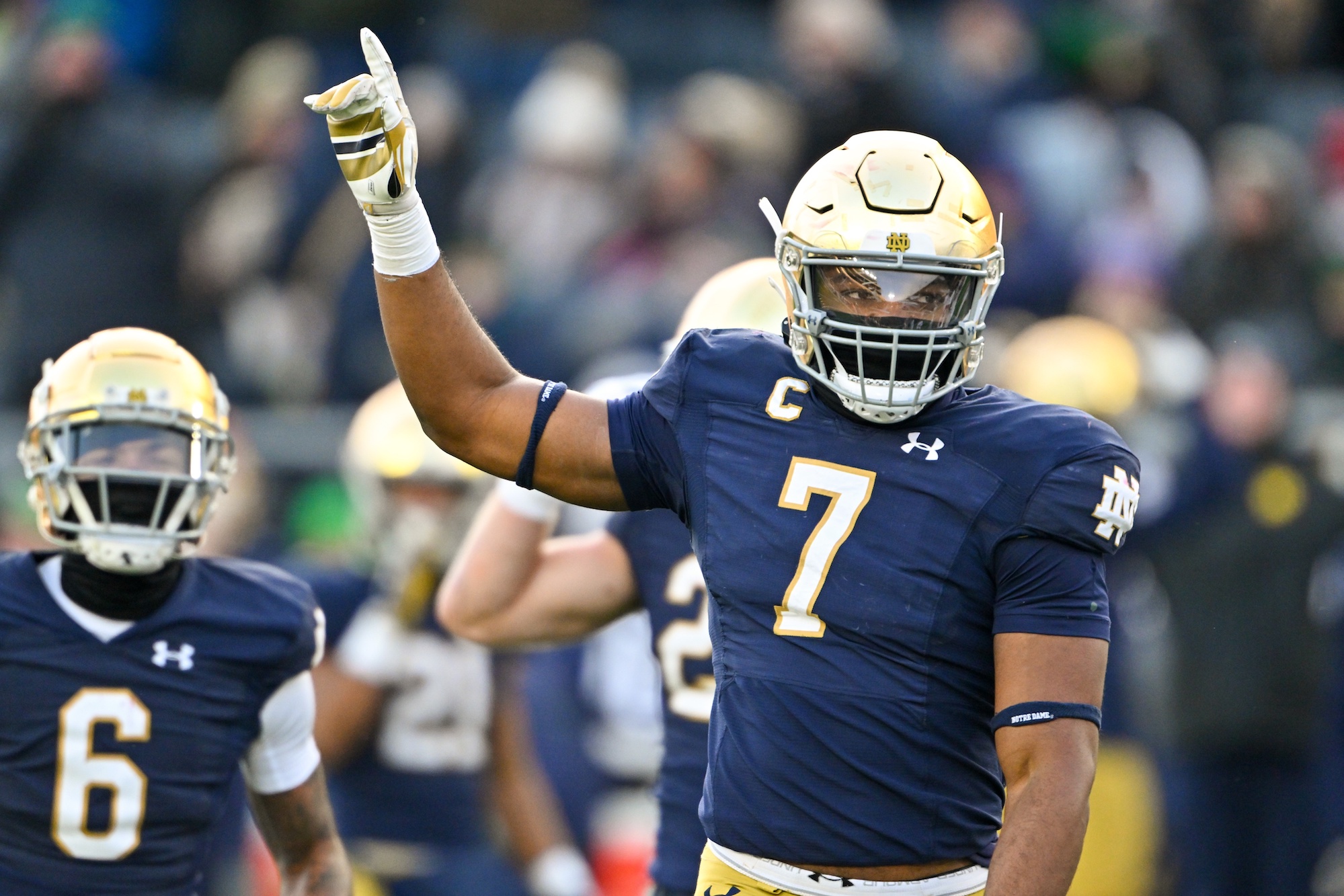 The 2023 Senior Bowl will provide an opportunity for NFL draft prospects to prove themselves on the largest pre-draft stage. Notre Dame EDGE Isaiah Foskey plans on taking full advantage. Foskey recently spoke exclusively with the Senior Bowl and Draft Network to discuss his motivation for accepting his invitation to compete in Mobile, Alabama.

Foskey also talked about what he’s striving to prove to NFL general managers and scouts in attendance at the Senior Bowl, his pass-rush arsenal, and more. Let’s get to know Isaiah Foskey a little better.

Isaiah Foskey: I was actually speaking with a gentleman that works for Notre Dame. He simply told me that an invite to participate in the Senior Bowl would be available to me once I decide to declare for the 2023 NFL Draft.

It was such a surreal moment for me. It was a moment I had been dreaming about. I’ve thought about this dating back to my high school days. I’ve always wanted to play in an All-American game. That was a goal of mine in high school, and the collegiate version of that goal was to play in the Senior Bowl. I’ve always wanted to showcase what I’m capable of on the biggest of stages. I enjoy taking advantage of opportunities to prove myself.

JM: You’ve earned it. What was your motivation for accepting the Senior Bowl’s offer?

Isaiah Foskey: My motivation for accepting the Senior Bowl’s offer was to take full advantage of every opportunity that allows me to showcase what I can do on a football field. I want to prove that I’m an all-around defensive end. That was the main motivator for me. It’s another opportunity to play football at the end of the day.

I just love the game of football. Since I’m not playing in Notre Dame’s bowl game, the Senior Bowl is another opportunity to go through a week of practice and play in an all-star bowl game.

JM: It sure is. What are you looking to prove to NFL general managers, coaching staffs, and scouts in attendance in Mobile?

JM: I want to build on that a little. How would you describe your pass rush arsenal? Do you have a go-to move?

Isaiah Foskey: I’m a versatile pass rusher. I’m always looking for ways to get after the football. When people see me, they see speed and more speed. They see the way my body is built and they see speed. They know I have a quick get-off that’s predicated around speed.

I can rush the passer with power too, though. If an offensive lineman is playing speed, I can hit them with power. If I have an opportunity to play with power, I’m definitely going to take advantage. If you’re back on your heels, I’m going power. That’s where my versatility comes into play.

I realize that speed is my strong suit. It always has been. I can always threaten the outside shoulder of an offensive tackle. My speed opens up so many possibilities for myself though. Opposing tackles can’t really do anything to stop me.

JM: We love that. We’ve seen that on tape. Are there any players in particular that you’re looking forward to competing with and against at The Senior Bowl?

Isaiah Foskey: I’m still analyzing the roster. I plan on doing some film study on my potential opponents. I love studying film and I’m not going to treat this opportunity any differently. It’s another week of practice I plan on preparing for. I’m taking it very seriously.

JM: Notre Dame utilized you as a stack linebacker at times. Do you hope to continue playing in a multiple-front defense at the next level?

Isaiah Foskey: I feel like I can play at outside linebacker or as an off-ball linebacker. Everybody knows I can play off the edge.

I’m a defensive player. I love playing the linebacker position because as a stand-up defensive end, you can see a lot of the field. At linebacker, you can see the entire field. I even played some middle linebacker in certain personnel packages. I was able to see from left to right tackle. I can see everything from the perspective of a guard, center, and quarterback. I can really open up my eyes and see the slot receiver. It helps me diagnose where the ball is going pre-snap. That’s where I can really thrive from. I can pretty much be a playmaker.

JM: That’s terrific stuff. You have a high football IQ that lets you play multiple roles. What can you accomplish at the Senior Bowl that you can’t at other pre-draft events? It will likely be the lone pre-draft event you attend that actually allows you to put the pads on and compete.

Isaiah Foskey: Like you said, it will be my lone opportunity throughout this pre-draft process to get on the field and showcase everything I’m capable of. I’m going to show everybody that the film doesn’t lie. I’m going to confirm everything you’ve already seen from me on film. You can’t confirm those things via interviews.

I’m excited to speak with the coaches, but I’m even more excited to play football in front of them. Playing the game of football, putting stuff on film, it just means so much more. You can’t say you’re going to do this or that. You can’t say you can do something if you didn’t put it on film.

That’s why I love watching film in general. I pay close attention to what I’ve done on film. I enjoy trusting the film as my resume.

JM: You’re a football guy through and through. Is there a player in the NFL you’re looking forward to eventually swapping jerseys with?

Isaiah Foskey: I really love Nick Bosa and Joey Bosa. I like both of them a lot. I study their film a bunch. I love watching their get-off and how they rush the quarterback. I pay close attention to their hand placement and footwork. They’re such technical players.

I love watching Jason Pierre-Paul as well. I’m a big fan of his. He never allowed the adversity he faced to stop him from capturing success. I feel like his body build, his height, and weight, we have some similarities in those departments. He rushes off the edge with ferociousness. I love watching him play football.

JM: Those are three excellent choices. You’re a terrific leader by all accounts. You depart Notre Dame as the program’s all-time sack leader. You were voted a team captain. How can you display your leadership during Senior Bowl week?

Isaiah Foskey: I’m a big-time leader that thrives on creating positive energy. I prefer to lead by example. I want to create positive energy for other players. I know there are going to be a lot of plays being made on the defensive side of the ball at the Senior Bowl. The roster is that talented.

I’m going to thrive on that energy and brotherhood we’re going to form in Mobile, Alabama. That’s the type of leader that I am. I prefer to lead by example. I already know everybody is going to be running to the ball (laughs). Everybody wants to showcase what they’re capable of. I’m expecting our energy levels to be high. That’s me all the time. I’m going to hustle to the ball and create a positive environment.

JM: We can’t wait to see it in person. At the end of the week, what does a successful Senior Bowl week look like for Isaiah Foskey?

Isaiah Foskey: A successful Senior Bowl week would include me dominating every single one-versus-one opportunity. I’m going to highlight myself during passing rushing periods. I want to destroy run blocks. I have to dominate every one-on-one scenario I find myself in.

That’s what a successful Senior Bowl week looks like for Isaiah Foskey.