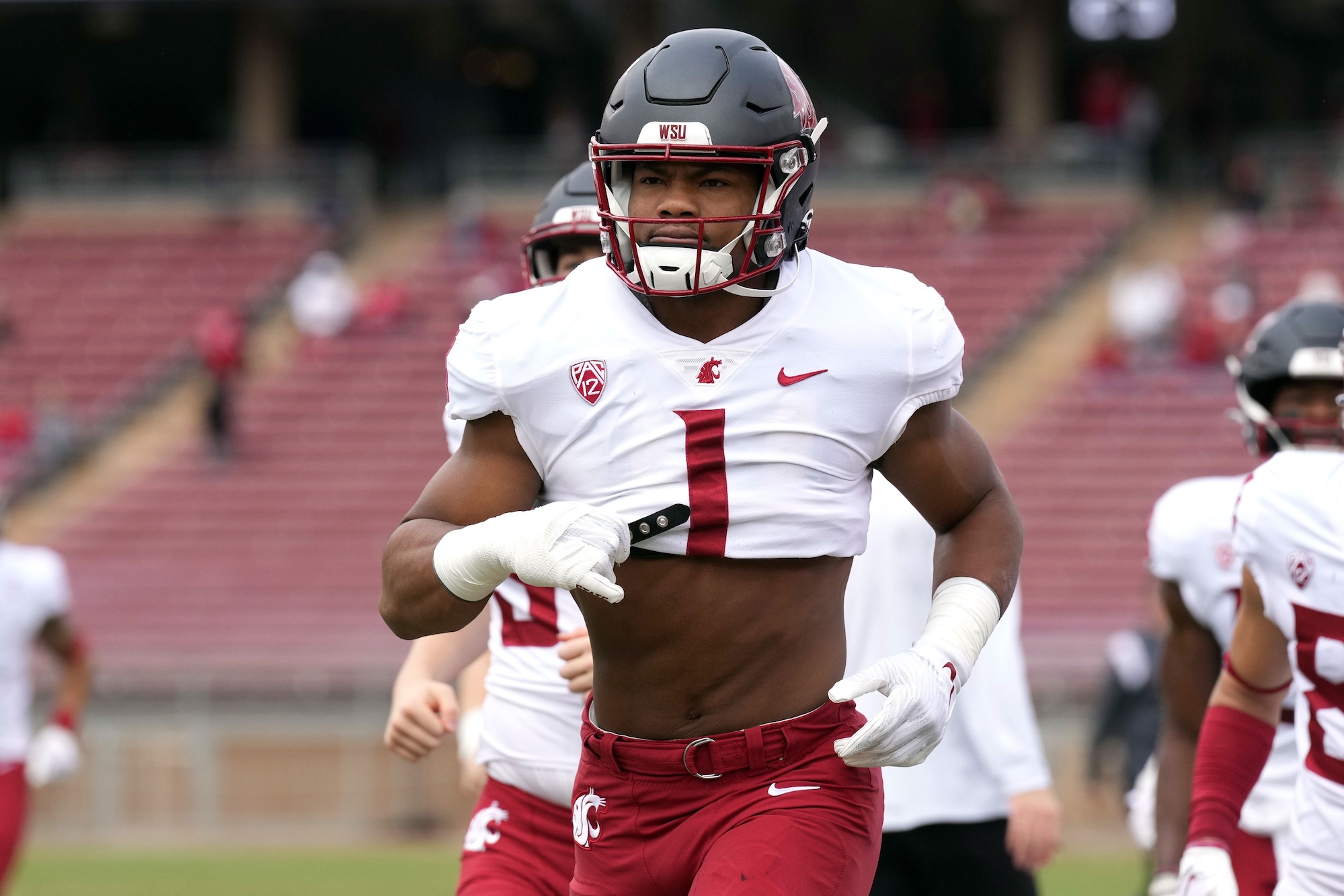 The 2023 Senior Bowl will provide an opportunity for NFL draft prospects to prove themselves on the largest pre-draft stage. Washington State linebacker Daiyan Henley plans on taking full advantage. Henley recently spoke exclusively with the Senior Bowl and Draft Network to discuss his motivation for accepting his invitation to compete in Mobile, Alabama.

Henley also talked about what he’s striving to prove to NFL general managers and scouts in attendance at the Senior Bowl, his favorite aspects of playing the linebacker position, and more. Let’s get to know Daiyan Henley a little better.

Daiyan Henley: I actually found out about my Senior Bowl invite during a team meeting. We were having a team meeting discussing what our week was going to look like. I believe it was ahead of our final game of the season. I was around all of my teammates and we were getting some things on the schedule.

It was a surreal feeling for me. It felt like another goal I achieved during my college career. It’s something that I set out to accomplish and I’ll forever hold this invite dear to my heart. I’ve always wanted to play in the Senior Bowl. It’s an amazing feeling. I’m so glad I had my teammates around me when I found out.

It motivated me to a place in my heart where I know the Senior Bowl is going to provide me with a platform to showcase my skills. Not only can I create some separation between myself and other prospects at my position, but I can also start forming that camaraderie with them. We’re going through this process together and we have to support one another.

It’s going to provide me with an opportunity to prove that I deserve to be alongside such talented prospects at the Senior Bowl. I’m going to be surrounded by so much great talent in Mobile. That’s where I found my motivation to accept the offer.

JM: You make some terrific points. We can’t wait to watch you take advantage of the opportunity. What are you looking to prove to NFL general managers, coaching staffs, and scouts in attendance in Mobile?

Daiyan Henley: I’m going to prove that I’m a driven player. I’ve defied the odds for the most part. I’ve achieved every goal I’ve set out to achieve. I’m always working toward achieving my goals. Even when the odds are stacked against me, I’m always confident in my ability to overcome whatever roadblocks are in my way. I embrace competition. I don’t run away from it.

That’s what I want NFL general managers to see. There are no barriers holding me back. I can overcome anything when I put my mind to it.

JM: You’re going to prove yourself. Are there any players in particular that you’re looking forward to competing with and against at The Senior Bowl?

Daiyan Henley: The rosters are loaded with talent. The Senior Bowl always invites the best of the best. I’m looking forward to competing against everybody in attendance. It’s not only a chance to compete, but I’m there to learn as well. I’m there to learn from my teammates. We’re all here for a reason. We all have our individual skill sets and I would love to learn a thing or two from another player.

I appreciate the fact that I’ll be playing alongside some prospects that may do things differently from me. It’s a chance for me to learn and become a better football player. Everybody at the Senior Bowl essentially dominated their competition in college. We’re talking about some high-level athletes here. I’m happy to be here and I can’t wait to compete. That’s what I live for. I’m going to attack the competition.

JM: Your mindset is going to take you a long way in this league. How do you look back on your decision to transfer from Nevada to Washington State ahead of the 2022 campaign?

Daiyan Henley: I ultimately look back on that as one of the best decisions I’ve ever made. It proved to be one of the most crucial decisions of my life. I look back on things and I loved my time in Nevada. I love Nevada. It’s always going to be my home, but Washington State and its coaching staff helped mold me into the player and person I am today.

JM: There’s no denying that. You played some wide receiver at Nevada before transitioning to linebacker. What was that transition like?

Daiyan Henley: It was mostly a swift transition. There’s certainly an adjustment period involved when switching from offense to defense. No matter what people say, there’s always going to be an adjustment. Having both skill sets has made me a more well-rounded player. I possess both mindsets and it allows me to see things clearly. I can look at different plays and formations through a unique lens.

It was a bumpy transition at first. It wasn’t as simple as going from receiver to linebacker. I went through three position changes in between. I did that while actually being a two-way player in the beginning. I was playing both offense and defense. There were a lot of moving parts.

While I was changing positions, my coaches still needed help at the wide receiver position. It was bumpy at first, but I pride myself on my ability to multitask. I’m a coachable player first and foremost. It wouldn’t have been possible if I wasn’t coachable. That was the biggest thing. You have to be coachable if you’re going to successfully make a transition. Being coachable got me through it.

If I wasn’t me, I would have folded under the pressure. I never allowed that to happen. I embraced the challenge because it wasn’t easy to learn the position at first. I had to listen to the coaches and be able to do what they asked of me. That’s ultimately how I got the job done. It took me a few years to get to where I’m at now. That transition played a key part in the success I’m currently experiencing.

JM: That’s so impressive. Washington State utilized you in a variety of ways, too. You moved around the formation. You even played a hybrid rusher off the edge. Do you hope to continue playing a unique role at the next level?

Daiyan Henley: I definitely do. If you can take anything from this conversation, I want to reiterate that I’m going to continue being a coachable player at the next level. I’m willing to learn. I’m excited to play multiple roles.

Being coachable means you’re ready to do anything. I’m ready to play wherever, and that includes special teams. I located my love for special teams over the past few seasons. Nothing’s too big or small for me. If I’m asked to rush the quarterback off the edge, I’m willing to do it. I can drop in coverage when necessary.

I have a rangy skill set. Being able to transition to linebacker from receiver proves that, not to mention the four or five positions in between (laughs). I hope that I’ve proven I’m a versatile player. I’m willing to do whatever is asked of me.

JM: Your history proves that. What can you accomplish at the Senior Bowl that you can’t at other pre-draft events?

Daiyan Henley: It gives me an opportunity to directly compete alongside, and with, “the best of the best.” I’m going to showcase my skill set. I’m going to answer any and all questions the scouts may have about my game.

Some people may doubt that I possess the technique necessary to play linebacker since I’ve only been playing it for a few seasons. I’m going to showcase my skills and my development as a linebacker against some of the best offensive linemen in the country at the Senior Bowl. I’m going to prove that I’m physical. I can change direction. I can get off blocks and make tackles. I’m going to play against running backs and prove that I flip my hips the same way and make the same cuts they can.

I can do those things at the Senior Bowl. It’s the only pre-draft event that’s providing me with the opportunity to strap the pads on and play. I did it during our season as well. I just felt like I wanted to prove myself among the competition only the Senior Bowl can provide. There are a lot of excellent bowl games and I have respect for every one of them. I’m going where the best of the best are going, and I felt like that was the Senior Bowl.

JM: That’s an excellent answer. Is there a player in the NFL you’re looking forward to eventually swapping jerseys with?

Daiyan Henley: Micah Parsons, Jalen Ramsey, and Lamar Jackson immediately come to mind. Hopefully, Tom Brady is still playing next season (laughs). Those are some guys I’ve really enjoyed watching throughout the years. There are a lot of retired veterans I would have loved to compete against. If I get a chance to play against anybody I just listed, I’m going to thank them for inspiring me.

JM: Those are excellent choices. At the end of the week, what does a successful Senior Bowl week look like for Daiyan Henley?

Daiyan Henley: Daiyan Henley is going to walk out of that building with a lot of new knowledge under his belt. I’m here to learn. The Senior Bowl is a big step in this pre-draft process. If I can learn something during Senior Bowl week, that would be huge for me.

I’m setting out to dominate every single day. That’s what a successful week looks like.