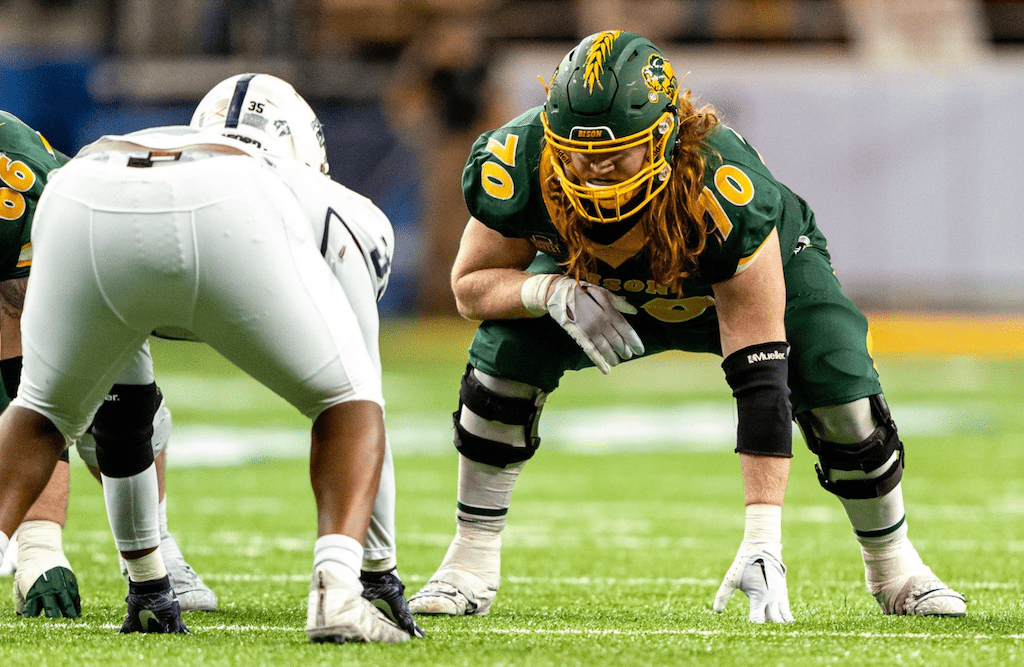 The 2023 Senior Bowl will provide an opportunity for NFL draft prospects to prove themselves on the largest pre-draft stage. North Dakota State offensive lineman Cody Mauch plans on taking full advantage. Mauch recently spoke exclusively with the Senior Bowl and Draft Network to discuss his motivation for accepting his invitation to compete in Mobile, Alabama.

Mauch also talked about what he’s striving to prove to NFL general managers and scouts in attendance at the Senior Bowl, his approach in the trenches, and more. Let’s get to know Cody Mauch a little better.

Cody Mauch: We had just wrapped up a Monday practice. We were recovering from our previous game. We arrived at the end of practice and our coaching staff surprised us by bringing out Jim Nagy. Nagy broke the news in front of the team and it was such a special moment for me.

JM: That sounds like a special moment. What was your motivation for accepting the Senior Bowl’s offer?

Cody Mauch: It’s obviously a great game and opportunity for me. I’m going to showcase my talent against some of the best players in the country. I was thrilled to receive an invite. I was hoping to get an invite all season long. I was beyond ecstatic when the offer arrived.

JM: North Dakota State has become a pipeline for NFL draft prospects. There’s no denying the amount of talent consistently coming from the program. With that said, do you feel the Senior  Bowl provinces an opportunity for you to increase your draft stock and debunk the “small school” narrative? You briefly alluded to that.

Cody Mauch: It absolutely gives me that opportunity. It’s a chance for me to put my skills on display against the best talent in the nation in front of every decision-maker in the NFL. The whole country will be watching. I’m aware of the opportunity that’s at my disposal.

JM: You initially walked on as a tight end at North Dakota State. What a journey it’s been for you. What was the transition like from tight end to offensive line?

Cody Mauch: It was a big transition. I came in and really thought I was going to play tight end (laughs). I actually ended up playing a little defensive end when I first arrived on campus. I went back to tight end but I kept putting weight on and made the move over to the offensive line. I found myself in that position room.

It was a huge transition. I needed to keep gaining weight. I changed my body composition. I had to learn a new position that I never played before. I had the support of our entire offensive line room. I couldn’t have done it without them. They helped me out a ton. It’s been a smooth transition ever since.

JM: You’ve played a ton of left tackle, but some see you kicking inside to guard at the next level. Which position do you see yourself playing in the NFL?

Cody Mauch: I’m not sure where I see myself in all honesty. I’ll prepare to play any position across the offensive line. I’ll be fine with wherever they decide my best fit is. Obviously, I’m a little more comfortable with tackle at this point given the amount of reps I have at the position. Like I said though, I’ll be ready to play wherever I’m needed.

JM: Do you see yourself playing in a zone-based scheme at the next level? You’ve had some success running outside zone at North Dakota State.

Cody Mauch: I could definitely see that, yeah. We’ve done a lot of that [zone] here at North Dakota State. I’ll run whatever scheme, but that’s what we’ve been executing at NDSU for a while now. I’m very comfortable with zone. I can see myself playing in a similar system at the next level.

JM: That’s an excellent point. Is there a player in the NFL you’re looking forward to eventually swapping jerseys with or playing against?

Cody Mauch: I haven’t given that much thought. You talked about the pipeline of North Dakota State talent in the NFL. I’d love to play against those guys and enjoy a reunion of sorts. Guys like Cordell Volson and Dillon Radunz come to mind. It would be really cool to reconnect with those guys. Volson is one of my best friends. Radunz was a veteran guy when I made the transition to the offensive line. I’d love to see them again.

JM: Those are excellent choices. If you could sit down and pick the brain of any offensive linemen in the NFL, who would you choose and why?

Cody Mauch: If we were talking past tense, I’d say Joe Thomas. He was so dominant at his position. I was actually able to chat with him a bit this past offseason. I did pick his brain a bit. We probably had an hour-long conversation. It was awesome. I could have talked to him and picked his brain for 12 hours straight (laughs). I’d definitely say Joe Thomas.

JM: What a pro he was. At the end of the week, what does a successful Senior Bowl week look like for Cody Mauch?

Cody Mauch: I’m going to play hard and up to my potential. Hopefully, I can win my individual reps out there. I’m going to compete to the best of my ability. However that looks, I’ll know what that feels like throughout my time in Mobile. That’s the ultimate goal.