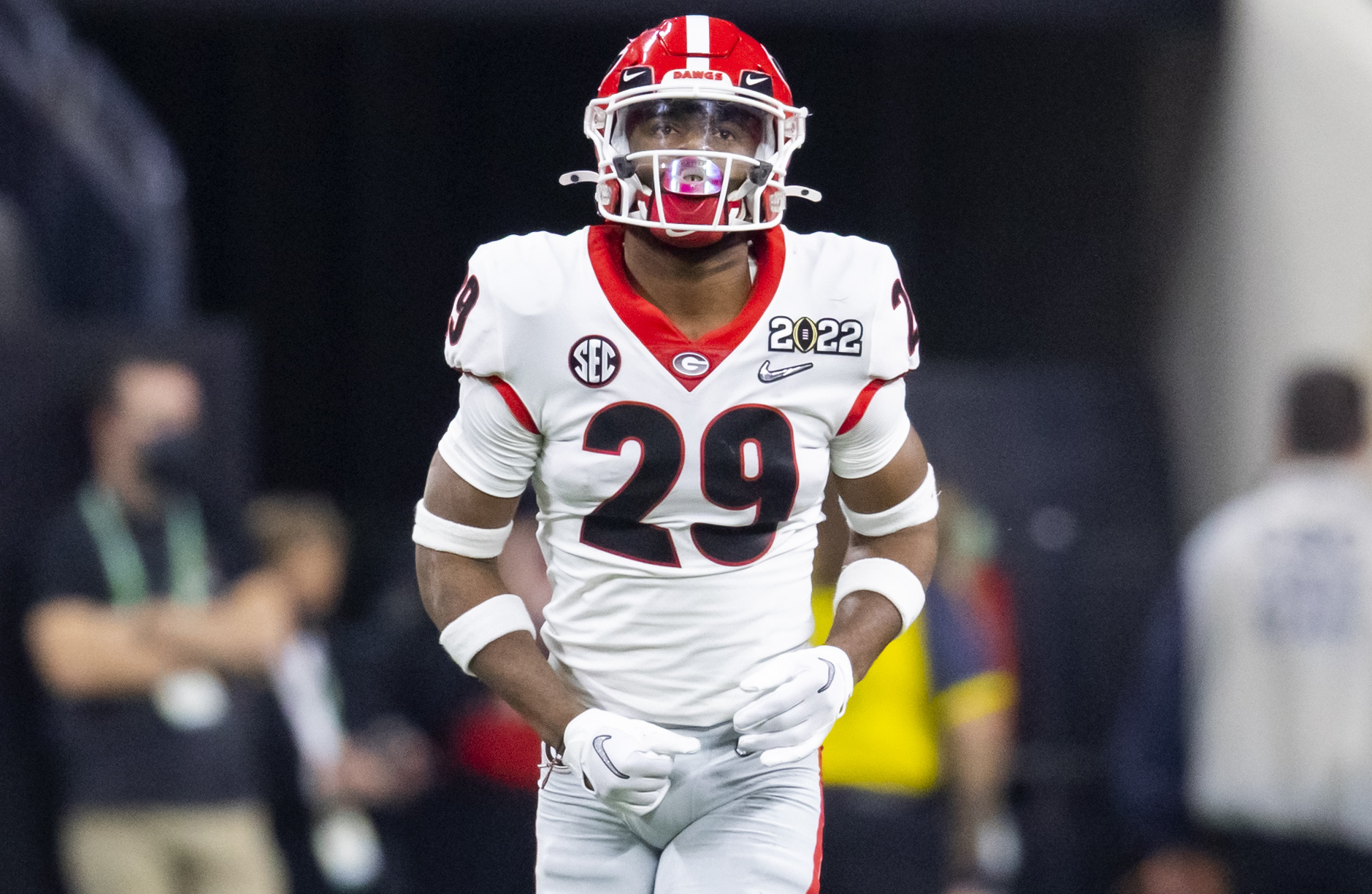 The 2023 Senior Bowl will provide an opportunity for NFL draft prospects to prove themselves on the largest pre-draft stage. Georgia safety Chris Smith plans on taking full advantage. Smith recently spoke exclusively with the Senior Bowl and Draft Network to discuss his motivation for accepting his invitation to compete in Mobile, Alabama.

Smith also talked about what he’s striving to prove to NFL general managers and scouts in attendance at the Senior Bowl, winning a National Championship, positional versatility, and more. Let’s get to know Chris Smith a little better.

Chris Smith: I was at our facility. We were getting ready for a regular day of practice. Coach Kirby Smart called me up to his office and handed me my Senior Bowl invite. I was super excited to receive an opportunity to participate in such an amazing pre-draft game and event.

I’ve been watching the Senior Bowl since I was a little kid. I watched everybody go to the Senior Bowl once their final season came to a close. The amount of great players that have come through the Senior Bowl is endless. I’m super excited to compete.

JM: We’re so excited for you. What was your motivation for accepting the Senior Bowl’s offer?

Chris Smith: I’m excited to go out there and compete against great players from all over the nation. I’m going to get out there and learn new things from NFL coaches and other players in attendance.

I’m the ultimate competitor. I’m never going to reject an opportunity to compete. I’ll be seeing a lot of talents at the Senior Bowl that I didn’t necessarily see on a weekly basis. Obviously, I’m extremely used to playing against talent from the SEC, but I think there are a lot of excellent talents throughout the other conferences as well. There are a lot of great players that come from all walks of life in college football. I’m excited to see those players I might be less familiar with in Mobile.

JM: That’s a great point. What are you looking to prove to NFL general managers, coaching staffs, and scouts in attendance in Mobile?

Chris Smith: I’m looking to prove what everybody else is looking to prove (laughs), that I’m a great football player. I want to prove that I’m one of the best players in the 2023 NFL Draft. Hopefully, I’m successful in proving that.

I plan on building a ton of great connections in Mobile. I’m going to learn something about my future roles. I’m looking to prove something, but I’m also looking to learn. I look at this as a learning opportunity. It’s a great opportunity for me to showcase my skills.

JM: You have the right mindset. You’ve been named a team captain on multiple occasions. What did that mean to you, especially at a program like Georgia that’s been so successful throughout your tenure?

Chris Smith: That meant a lot to me. This year, I was fortunate enough to be named a permanent team captain. That was special for me because, throughout the season, our coaches pick who our captains are. At the end of the season, your peers pick the team captains. To have the respect of my peers was the most important thing to me.

My peers selected me to be a permanent team captain. It meant so much to know my peers looked at me in that light. It’s something you always hope to achieve as a player. I’ve always looked forward to gaining the respect of my teammates. I wanted to be a great teammate. It’s definitely special.

JM: It’s easy to see why you’re a permanent team captain when speaking with you. You’re from Atlanta, Georgia. You’ve achieved the ultimate dream. What will forever be your biggest takeaway from these National Championship teams?

Chris Smith: My biggest takeaways will forever be the connections and brotherhood we built. I had a special bond with my teammates. We went through a lot together to win back-to-back National Championships. I’ll never forget those moments.

The amount of hard work we put in, the trials and tribulations, the late nights, I’ll never forget it. To go back-to-back like we just did, it’s a testament to the amount of work we put in. It paid off for us at the end of the day.

JM: It sure did. When we turn the tape on, we see a versatile defender that plays free safety, in the box and as a nickel. What is it about your skill set and approach that allowed you to play multiple roles for Georgia’s defense?

Chris Smith: First off, I played cornerback in high school. I dabbled at safety, but I was mostly a corner. Coming into Georgia, they felt like I was smart enough to learn a new position. They thought I had the skill set to transfer over to being a safety. It was a new position for me.

I was still getting some reps at cornerback during practice. In games, I was getting reps at nickel and at both safety positions. I just love focusing on hard work. That’s all I focus on. It wasn’t easy at first. I had to play a bunch of different positions. I just locked in and put my head down. I went to work. I asked plenty of questions.

I think it added a ton of versatility to my game. I was able to play multiple positions in our defensive backfield. It definitely added a new wrinkle to my overall skill set. It’s a testament to the mentality I have for the game and how I attack every single day.

JM: It sure does. You’ve really been that Swiss army knife for Georgia’s defense. You’ve been a matchup eraser. That role is becoming increasingly important in today’s NFL. We’ve seen what Jevon Holland does for the Miami Dolphins for example. Derwin James is another one. Talk to me about your evolution as you began fitting that role at the next level.

Chris Smith: You mentioned some great players. Jevon Holland and Derwin James are two excellent examples. There are plenty of other players that come to mind. I think of Kenny Moore and Desmond King. There are so many great nickels in the league.

I think of Tyrann Mathieu when I think of great hybrid defenders. I look up to those guys and I’ve always tried to sprinkle some of that skill set throughout my game. I love having that amount of versatility.

I feel like I can bring that versatility to the NFL. I plan on being as versatile as possible. It’s going to increase my value as teams evaluate me throughout this pre-draft process. NFL teams see versatility as a plus. I want to be able to go out there at the Senior Bowl and show that. I can play any position in the defensive backfield. I pride myself on bringing those aspects of my abilities to the game.

No matter what Georgia asked me to do, I always put my best foot forward and was willing to compete at the highest level imaginable.

JM: Your football IQ speaks for itself. I’d love to place you in a scenario. Say it’s 3rd-and-long with the game on the line. Would you prefer to be manned up on the opposing team’s best receiver, or playing zone coverage with a chance to make a play on something near the sticks?

Chris Smith: Man, that’s a good one (laughs). I like making plays. I’ll take whichever opportunity puts me in the best position to make a play. If I know they’re targeting their best receiver on that play, then I want to play man-to-man coverage on him.

If they have a few more options at the pass-catching positions, and I know the quarterback might buy himself some time in the pocket, I might want to play in zone coverage and sit at the sticks while reading the quarterback’s eyes.

I think it all depends on the situation. If I had to choose one, there’s nothing like that feeling you get from going out there and shutting somebody down in man coverage. There’s something special about that. I’ll choose your man-to-man scenario.

JM: I love that. What can you accomplish at the Senior Bowl that you can’t at other pre-draft events?

Chris Smith: I’m going to take advantage of the intimate setting by building those connections. I’m ready to compete against the best senior players in the nation. This is what we do it for. Growing up, I’ve been watching the Senior Bowl since I was a young kid. It’s something special. I’ve always wanted to be a part of it.

Chris Smith: Eric Stokes is one of my best friends. Tyson Campbell and Travon Walker come to mind. You know I’ve played with a lot of NFL players at Georgia (laughs). I built relationships with all of my teammates at Georgia. Quay Walker and Devonte Wyatt also come to mind. I have so much respect for all of my teammates. I saw the amount of work they put in to reach the next level.

I’ll give you a list of guys I don’t know personally as well. Jalen Ramsey, Derwin James, Tyrann Mathieu, and Kenny Moore would be on that list. I have a ton of respect for Derrick Henry. I love the way he plays the game. Patrick Mahomes and Stefon Diggs are also on my list. I have aspirations to swap jerseys with all of those guys.

JM: When you play at Georgia, you have options. At the end of the week, what does a successful Senior Bowl week look like for Chris Smith?

Chris Smith: First and foremost, a successful Senior Bowl starts with me showcasing my skills. I’ve always built solid connections with my teammates. Now it’s time for me to build those same connections with NFL coaches and personnel.

I want to go out there and make a bunch of plays in the game. I wouldn’t mind getting an interception or two (laughs). Maybe I’ll force a fumble or get a sack. I want to create takeaways.