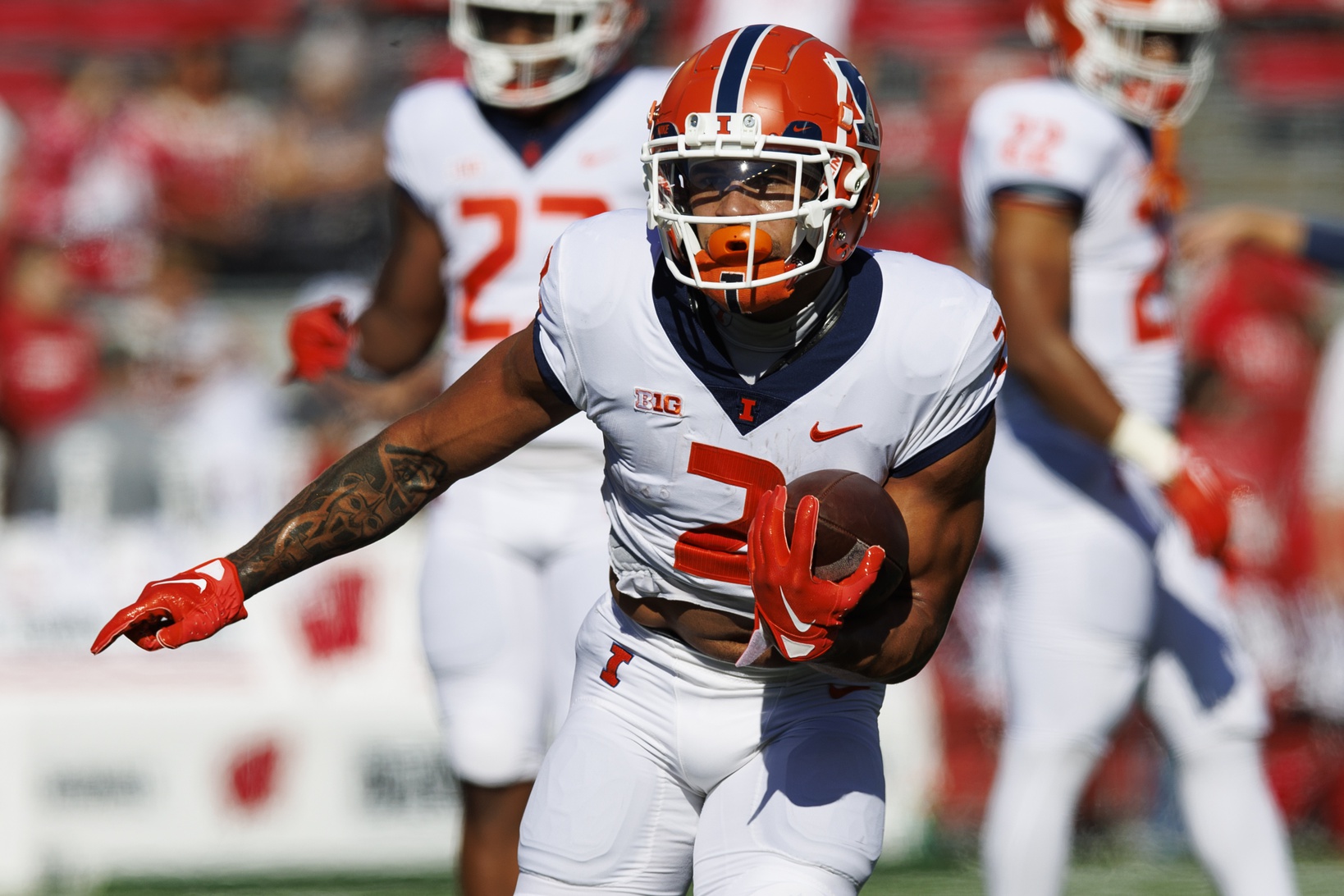 The 2023 Senior Bowl will provide an opportunity for NFL draft prospects to prove themselves on the largest pre-draft stage. Illinois running back Chase Brown plans on taking full advantage. Brown recently spoke exclusively with the Senior Bowl and Draft Network to discuss his motivation for accepting his invitation to compete in Mobile, Alabama.

Brown also talked about what he’s striving to prove to NFL general managers and scouts in attendance at the Senior Bowl, his versatility, and more. Let’s get to know Chase Brown a little bit better.

Chase Brown: I was sitting in a team meeting. Our coaching staff announced it after the Michigan game. In my head, I’m thinking we were just coming off of a tough loss. At the same time, it was truly a blessing. I needed that news at that moment.

I’m so excited to represent not only Illinois at the Senior Bowl but also my family and myself at such a prestigious event. The Senior Bowl only welcomes the best of the best. I’m blessed to have this opportunity. I was very excited at that moment. I’m planning on showcasing my talents.

Chase Brown: Playing at the Senior Bowl will give me an opportunity to gain exposure on a national stage. It’s the biggest pre-draft stage that exists. It’s going to help me separate myself from the pack a little bit. I felt truly blessed. I’m looking forward to competing.

When you accept the offer, you’re essentially telling everybody that you’ve officially declared for the 2023 NFL Draft. It’s a great feeling. I can leave Illinois with my head held high. I made a lot of friendships. Our journey together has come to an end, but it’s for a good reason. Every college football player dreams of having an opportunity to play in the NFL.

JM: What are you hoping to prove to NFL general managers, coaching staffs, and scouts in attendance in Mobile?

Chase Brown: I just want them to see how consistent I am. That comes first. I’m an extremely hard worker. I practice with the same intensity as if we were playing a game. There are a lot of things you can’t always see on tape. Seeing a guy in person presents the best impression of who a guy truly is. The Senior Bowl is giving me that opportunity.

At the end of the day, you can turn on the tape and say that I’m an explosive running back. How does he work at practice though? How does he get along with his teammates? Is he coachable? Is he an everyday guy? That’s what I want to prove to scouts and general managers throughout my time in Mobile.

JM: We’re all so excited to see you in person. Are there any players on the Senior Bowl roster you’re especially looking forward to competing alongside?

I’ve been competing with those guys every day. I’m living with Jayden Reed and Sydney Brown in Fort Lauderdale right now (laughs). We’re training together. I’m just looking forward to getting out there with those guys. We’re going to create more memories together.

JM: Man, how cool is it to be going through this process with your twin brother?

Chase Brown: It’s surreal. We’ve always talked about playing in the NFL together. We’ve talked about going to the Senior Bowl and NFL Scouting Combine. We’ve been following all of these events since we were little kids.

We’re college football players with goals of our own. As a college football player, being selected to play in the Senior Bowl alongside my twin brother, it’s an unbelievable moment. We’re going through this process together. I’m going to watch him work out at the combine in front of the coaches, scouts, and general managers.

It’s hard to process right now because we’re going through it but I know we’re going to look back on this 10-15 years from now. We’ll never forget this time period. We’ll remember how blessed we were and how crazy this all was. We’re pushing each other through this process.

JM: It’s a dream come true. Do you see yourself playing in an outside zone scheme at the next level? You thrived in a similar system at Illinois.

Chase Brown: I loved playing in that system at Illinois. It allowed me to press and puncture defenses. I was able to use my patience to my advantage. That’s what I did during the season, especially in our biggest games. I let those holes develop and I hit them as late as possible. I let those linebackers overflow and the rest is just playing football.

Running back is such a reactionary position. You can coach a running back and teach him where to go, but once he reaches the second level, the biggest thing is to use your natural abilities to make people miss. You can’t really coach that. You have to make the plays in the open field.

JM: 2022 was a huge season for you. You ran for a career-high 1,643 yards. You proved you could handle a workhorse role. What changed for you?

Chase Brown: I’ve always been an extremely driven individual. There wasn’t some big transformation. I made a few alterations to my routine. I’ve put in a countless amount of hours into studying my opponents in the film room. I was more familiar with my keys and defenders’ pre-snap movements. Are they blitzing?

I knew I was able to run the ball well, but I entered the season really wanting to prove myself in pass protection. That’s something I took a lot of pride in this season. I think I showcased a terrific amount of improvement in pass pro. I put my best foot forward.

I also wanted to showcase my route-running and pass-catching abilities. I also thrived in a workhorse role, as you mentioned. I took over that main role. I carried a heavy workload throughout the entire season. I spent a lot of time taking care of my body. I spent a lot of time in the film room. Those were some of the changes to my routine.

JM: You showcased improvement in every area of your game. What can you achieve at the Senior Bowl that you can’t at other pre-draft events?

Chase Brown: Historically speaking, the Senior Bowl is known as THE bowl game to attend. There are things I can achieve at the Senior Bowl that I can’t achieve at the combine for example. The coaches will actually get to see what I look like in pads. They’ll see me moving around. They get to spend more time with you and get a feel for your energy. That’s the most exciting part for me. We’re going to be working hands-on together. We’re in our underwear at the combine (laughs). I’ve heard a few people refer to it as the underwear Olympics.

Chase Brown: I think it would be really cool to swap jerseys with somebody that played at Illinois. Guys like Kendrick Green and Kerby Joseph immediately come to mind. Of course, my brother [Sydney Brown] is on that list as well (laughs). That’s another goal of ours. I can’t wait to create memories like that.

JM: Those are some excellent choices. At the end of the week, what does a successful Senior Bowl week look like for Chase Brown?

Chase Brown: I’m going to put my best foot forward at every single practice. I know I’m going to do that. I’m planning on showing the coaches what I can do on the board, at practice, and all throughout the drills. I’m going to have fun out there. I’m looking forward to having fun and competing.

That’s what a successful Senior Bowl looks like for Chase Brown.