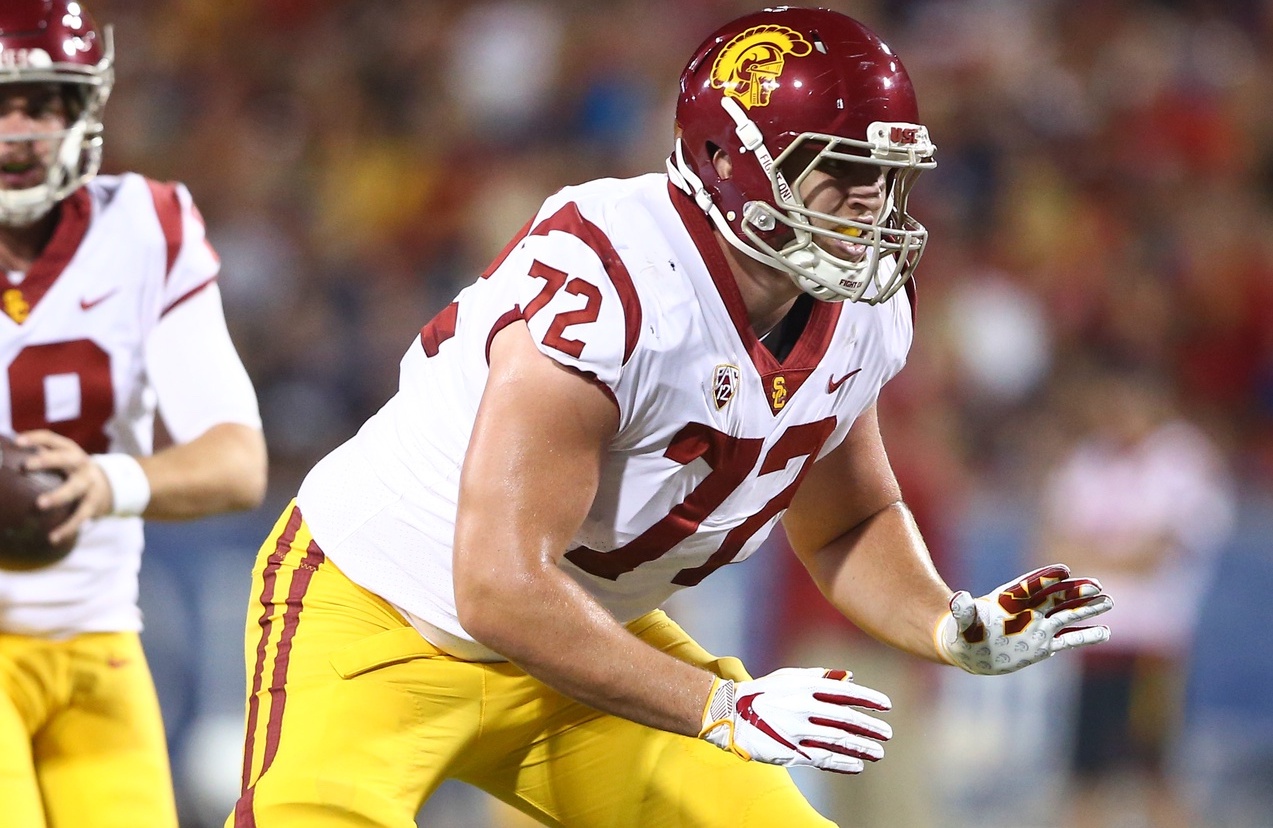 The 2023 Senior Bowl will provide an opportunity for NFL draft prospects to prove themselves on the largest pre-draft stage. USC offensive guard Andrew Vorhees plans on taking full advantage. Vorhees recently spoke exclusively with the Senior Bowl and Draft Network to discuss his motivation for accepting his invitation to compete in Mobile, Alabama.

Vorhees also talked about what he’s striving to prove to NFL general managers and scouts in attendance at the Senior Bowl, his balanced skill set as a guard, and more. Let’s get to know Andrew Vorhees a little better.

Andrew Vorhees: It was an unbelievable feeling. I can’t really find the words to describe my emotions at that moment. It was a dream come true for me. As a younger player, I had witnessed some of my older teammates receive that same call. You hope to be in their place someday. I now find myself in that same position. It’s an indescribable feeling.

I was at our facilities when I received the call. My coaching staff handed me the invite. I was beyond excited. I couldn’t really believe it as it was all going down.

JM: That sounds like an awesome moment. To expand on that a little, what was your motivation for accepting the Senior Bowl’s offer?

Andrew Vorhees: I know that the best seniors in the nation attend the Senior Bowl. That was enough motivation for me. I wanted to be a part of that. Jim Nagy and his staff have put a ton of faith in me. They put so much effort into making this game the perfect showcase for senior draft prospects.

Jim Nagy’s commitment to the cause is real and genuine. The Senior Bowl does so much to help amateur football players chase their dreams of achieving a professional career. I’m very aware of the prestige that surrounds the Senior Bowl. All things considered, accepting their invite was a straightforward decision for me. Hats off to Jim Nagy and his crew.

JM: Jim Nagy and his staff do terrific work. What are you looking to prove to NFL general managers, coaching staffs, and scouts in attendance in Mobile?

Andrew Vorhees: You just want to prove that you belong, right? I wasn’t heavily recruited coming out of high school. I was just recruited enough to get myself to USC. I want to show the world that I belong alongside the best of the best. I’m hoping to make a great initial impression in Mobile.

All of the scouts are going to be in attendance. I’m hoping to prove myself as a future NFL player in their eyes.

Andrew Vorhees: I’ve been paying close attention as the Senior Bowl continued to reveal the roster over the last few weeks. I’m training with a few offensive and defensive linemen that are scheduled to attend. I’m looking forward to the competition in general. I think we have an excellent group of guys this year. It’s a stacked class on both sides of the ball. I’m looking forward to the opportunity to compete. I’m going to show the world that I belong.

JM: What’s your favorite aspect of playing the guard position?

Andrew Vorhees: Playing an interior position is extremely violent. It’s smashmouth football in the trenches. It gives football an old-school feeling. The game is always evolving, but playing guard always feels like a throwback position.

When you look at how offensive line play has transformed over the years, it’s changed a lot for offensive tackles. It’s a pass-protection league nowadays and that’s had a huge impact on tackles. For interior players, you have a 3-technique that lines up directly over you. It might be a nose tackle or a 2i. These guys are 350 pounds and they’re quick (laughs). Look at what Vita Vea is doing right now.

These are big, strong dudes nowadays. I just love that aspect of playing an interior position. We put our hand in the dirt and it’s often a one-on-one matchup. It’s old-school football. I love that mentality. The more physical guy usually wins.

JM: I love that. How did playing in USC’s system help get you ready for the NFL?

Andrew Vorhees: I’ve played in a bunch of different offenses. I’ve been exposed to so much. I had an opportunity to play for three offensive coordinators, four position coaches, and two head coaches. I feel like my toolbox is very expansive. I have a ton of experience with a lot of different coaches.

I’ve learned a lot from all of them. I’m thankful for what they taught me. I took away something from their expertise. I think that’s one of my strong suits as a prospect in the 2023 NFL Draft.

JM: What was it like blocking for a dual-threat quarterback like Caleb Williams? How can you apply that experience to your acclimation as a professional football player?

Andrew Vorhees: Hats off to Caleb Williams for what he’s done and what he’ll continue to do. I think he shocked the world this year with his abilities. Playing with Williams certainly helped me get ready to block for a dual-threat quarterback.

You look at guys like Justin Fields. He’s [Fields] a bigger dude that plays a similar style to Williams. These guys have the ability to run around and make crazy passes nowadays. You look at Patrick Mahomes and some of the crazy completions he’s able to make. You see some of that in Williams.

JM: That’s an excellent point. What can you accomplish at the Senior Bowl that you can’t at other pre-draft events?

Andrew Vorhees: I think the competition that’s scheduled to be in Mobile speaks for itself. I have to prove myself alongside the best of the best. I have to perform at a high level. I’m going to prove that I belong in the NFL. The level of competition is going to be at an all-time level.

Andrew Vorhees: I was fortunate to play college football at a program like USC. I’ve played a lot of football with guys who are now playing in the NFL. I’ve seen what it’s like for them to swap jerseys with NFL players and I can’t wait to share those experiences with them. I’d love to swap jerseys with some of my former teammates such as Talanoa Hufanga, Drake London, and Drake Jackson. I was very blessed to play at a program like USC.

JM: That’s an excellent choice. At the end of the week, what does a successful Senior Bowl week look like for Andrew Vorhees?