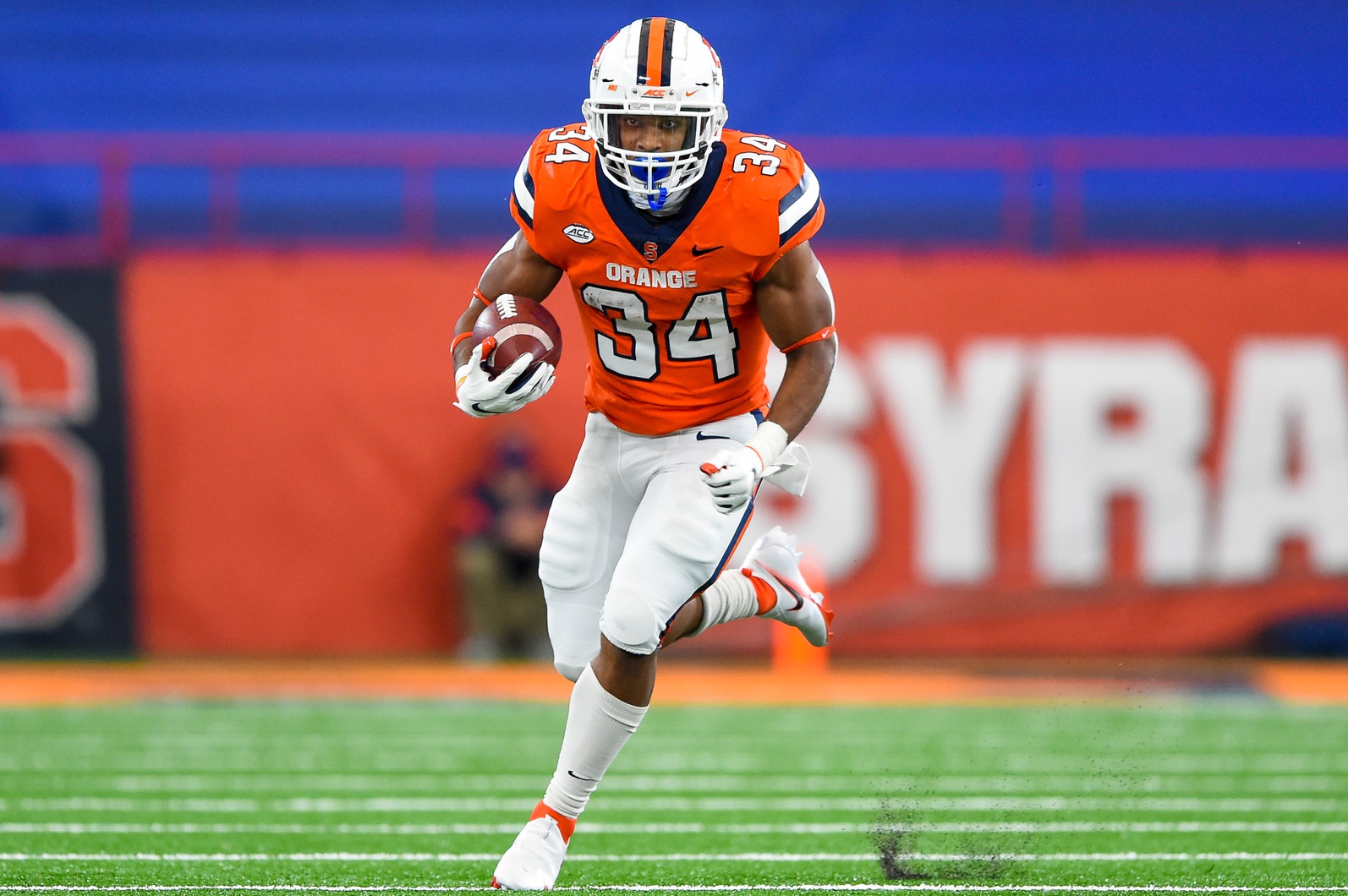 One of, if not, the most underrated ball carrier in all of college football, it’s time Syracuse’s Sean Tucker gets his time in the spotlight. While there won’t be any comparisons made to the Orange’s prestigious list of alums in Jim Brown, Floyd Little, or Larry Csonka just yet, with 1,496 yards on the ground last fall, Tucker checks a ton of boxes as a future NFL impact starter.

A stoutly-built prospect that stands no more than 5-foot-10, if it were a t-shirt and shorts contest, Tucker would finish near the tail end of the selection process for many. As we know, however, the game of football isn’t a beauty contest—it’s legalized physicality and Tucker has become one of the most overpowering talents the nation has to offer.

While Bijan Robinson (Texas), Jahmyr Gibbs (Alabama), and Zach Evans (Ole Miss), have garnered headlines throughout the spring, due to Syracuse’s lack of program prestige within a weak ACC, Tucker’s game has flown drastically under the radar in comparison to some of the country’s most dynamic bell-cow backs.

After totaling 626 yards in his first year on campus, Tucker—a redshirt sophomore—shattered the Syracuse single-season rushing record in 2021 and enters this season with Heisman aspirations as the Orange’s premier offensive weapon. Despite the Orange finishing under .500 in seven of the last eight seasons, Tucker’s progression into one of the best running backs in football has ushered in a sense of optimism this fall in western New York. While Syracuse faithful often wait until basketball season to showcase their support, Tucker has single-handedly rejuvenated the program and should only get better and better with each snap he receives.

A talent who reminds me a ton of Pierre Strong Jr.—a running back out of South Dakota State that the New England Patriots used an early day-three selection on back in April—Tucker’s deceptive quickness and lightning-quick footwork within a phone booth is extremely intriguing. A hard-nosed ball carrier who can run both through and around defenders, it doesn’t take a massive crease or an army of bodies for him to see open turf—he manufactures space by using his eyes, hips, and feet to explode through the smallest of holes into vacant grass, and usually, the end zone.

While it’s only June and the evaluation of Tucker that we are discussing now will alter in the coming months, I’m interested to see his growth as a pass-catcher this season. While 28 receptions in two years are much better than zero, in today’s NFL, and in the eyes of scouts across the league, evolving into a true three-down talent remains on the to-do list for Tucker if he looks to hear his name called relatively early come springtime. Gone are the days of static early-down backs without pop in the passing game, and by diversifying that side of his deep bag of likable traits, there isn’t a ceiling on how much he could improve his draft stock throughout the campaign.

One of the most impactful running backs Syracuse has had in its program’s 120-plus year history, Tucker should enter the season bigger, faster, and stronger as expectations remain sky-high for the first-team All-American. While the Orange as a whole has little to hurrah about over the years, don’t be so quick to flip the channel this fall—take time to watch No. 34 embarrass your favorite defense.