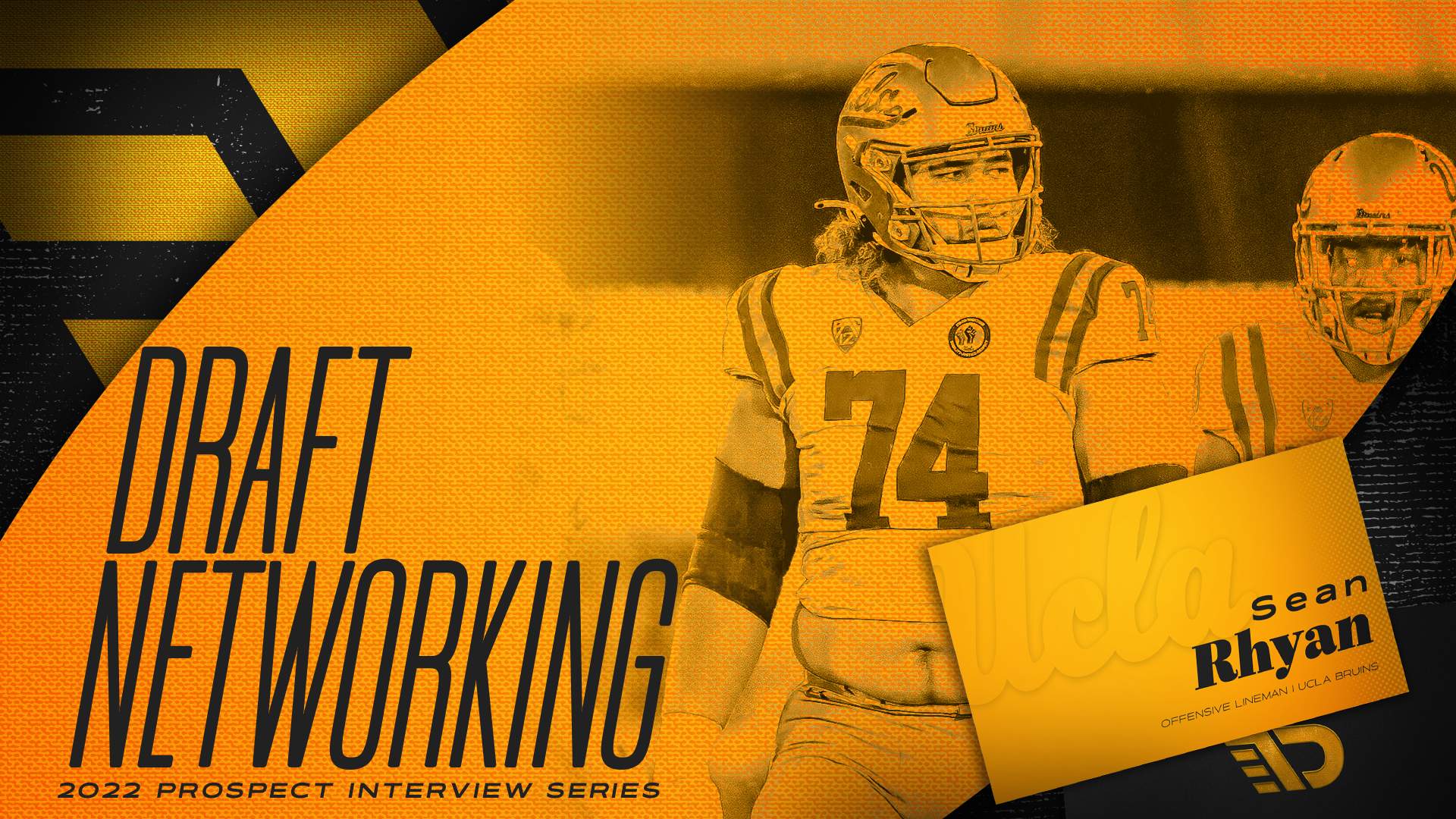 We’re going to see offensive linemen drafted early and often this April. Every NFL team is looking to build an offensive line they can rely on to protect their quarterback. A lack of depth was quite evident all throughout the league in 2021. These factors should make UCLA’s Sean Rhyan a top priority for many teams in the 2022 NFL Draft.

A promising blocker with tons of experience against top competition under his belt, Rhyan recently spoke exclusively with The Draft Network about his impressive career for the Bruins, his experience and performance at the combine, how he handles different pass rushers, and what kind of player he’ll be at the next level.

JM: You got on the field at UCLA immediately as a true freshman. That’s not exactly common. What was it about your mindset that allowed you to contribute from such a young age?

SR: I came into college ready to work and do my part. I was able to pick up and learn the playbook in a relatively efficient manner. Current offensive coordinator and offensive line coach Justin Frye helped me understand as much as I could as a freshman. Those things allowed me to progress rather quickly. Pairing that with my God-given abilities allowed me to start and work my way up the ladder little by little. I still remember the first time coach Frye told me I was going to start about a week out from the season. I was so excited to start as a true freshman.

JM: You were ready and never looked back. You have a ton of experience as a high-quality starter. You spent several seasons as a key player for UCLA, and you got better every single year. How do you look back on your time at UCLA?

SR: I look back on it in a positive light. UCLA was a fantastic school not only for my athletic abilities but for my education as well. The education was humongous. Getting a quality education indirectly helped me become a better football player. Whether that means I studied the playbook in a more effective manner or what have you, the techniques our academic advisors shared with me helped me lead a better life in every way imaginable. Our teachers in general taught us ways to process information.

That knowledge followed me to the gridiron. It really helped me learn and retain plays and techniques in football. It’s why I continued to improve throughout my time at UCLA. I really enjoyed the entire process. It’s a fantastic school and a fantastic area. I’m blessed to say I attended The University of California Los Angeles.

JM: We love to see education and football working hand in hand like that. What was it like playing for coach Chip Kelly?

SR: It was fantastic. Coming in as a freshman, coach Kelly has such an extensive playbook. It can definitely be scary at first. I think a lot of people were surprised by how many plays we run, and the different formations we run those plays out of. He knows that once we understand his expansive playbook, we’re ready and prepared for the NFL. He helps us down the road in the long run. He gets us used to understanding entire concepts of the anatomy of a play, and the different variations of it. That’s life in the NFL as well.

Coach Kelly is a great coach that understands how to coach his players. When we need to get ripped up a little bit, he’s there to do that (laughs). He also knows when to dial it back a little bit. That’s an important trait. He understands what mood is necessary in the moment. We continuously progressed and became better players under coach Kelly. He was great with the defensive players as well. He helps us win games.

JM: He’s an NFL-level coach. We’ve touched on your staff quite a bit, but I want to expand on that. What can you tell me about the scheme UCLA ran on offense, and what the coaching staff asked of you?

SR: We ran so many different schemes. We never had one identity. Some teams are an inside zone team, other teams run a power gap scheme. Some teams were extremely pass-happy or run-heavy. We were so versatile. Our quarterback was so athletic in general that it allowed us to run so many zone option plays. It allowed us to run and pass the ball at similar efficient clips. We were a very balanced team offensively. Our quarterback could run the ball, too.

A lot of times, what schemes we were going to run was decided by our upcoming opponent. We studied their defense and figured out what might work for us. We’d go into our playbook and identify what would work best against that opponent. We went out and executed that. We had a lot of success. Coach Frye did a tremendous job with our offensive line. He coached us up and helped establish the identity of our offensive line.

Teams had to really focus on the threat of both the run and pass when they prepared to play UCLA. We had fantastic running backs. We had an athletic quarterback. The playbook was open for us. We were such a balanced team overall that it was difficult for opposing teams to figure us out offensively. It was never easy to pinpoint what we were going to do that week.

JM: That’s a terrific, thorough answer. We appreciate that sort of insight. You recently went to the combine and had a great week. You posted a 33.5-inch vertical, which was the top result among all linemen. What was your overall experience like at the combine?

SR: It was a great process. We did a lot of interviews and went through a lot of medicals. That’s what the combine is all about for every prospect in attendance. You meet and speak with teams. It’s obviously a brand-new process and experience for us prospects. It was a great experience.

It’s definitely long and grueling, but it’s very necessary. It was great to experience what it’s like to live out your dream in the professional level of sports. I enjoyed the combine a lot. I had a bunch of fun. The interviews were great. I loved every second of my experience.

JM: The combine really is a special event. Speaking of the interviews, did you have many formals throughout the course of the week?

SR: I had a good amount of formal interviews. I haven’t really compared my experience with other prospects, but I had roughly 12 formal interviews during my first night at the combine. It felt like I walked off the plane straight to the meeting room (laughs). We went straight into medicals and interviews. I met with a lot of teams, but I’m keeping the details private.

I enjoyed meeting with every team that took the time to speak with me and get to know me. I believe they enjoyed interviewing me as well. I think I’m different from most prospects in regards to my personality and how I carry myself. I hope they had as much fun interviewing me as I had answering their questions.

JM: There’s a lot of interest in you and it’s easy to see why. You made 19 starts at left tackle in 2020 and 2021, but there’s a lot of chatter about you kicking inside and playing guard at the next level. What are your thoughts on that, and what are NFL teams saying about your position going forward?

SR: I’ve definitely heard the chatter about me potentially kicking inside and playing guard. Before teams even mentioned the possibility at the combine, I was telling them that I am more than happy to play tackle, guard, or even center if that’s where they see fit. Whichever team drafts me, I want to be able to help them in whatever way they need. I want to help us win games and be successful. I brought up the topic before they did. I didn’t want to come in and box myself into just being a tackle or a guard. Being versatile is one of my strengths and I want to help the team with that versatility.

JM: That’s the right attitude to have. You come off the ball hard and generate vertical movement in the run game. Tell me about your mentality as a run blocker.

SR: I’m always aiming to move the guy in front of me (laughs). As long the guard next to me and I were on the same page, which we were, we’re going to open up that hole for the running back and we’re going to root that guy out of his spot because at the end of the day, it’s our job to create a hole, and it’s the defensive line’s job to plug that hole. Whoever has the better day between the offensive line and defensive line is going to achieve their goals. I tend to have the better day most of the time (laughs). I think it’s as simple as that. We’re going to create that hole and you better have a linebacker to fill it or try to make an angle tackle because we’re springing our running back to the second level.

JM: We’ve seen you do it on tape so many times. Switching over to pass protection, how do you handle speed differently from power?

SR: I’m very patient in pass protection. I think a lot of defensive ends misjudge my ability to move quickly, smoothly, and efficiently. I think I catch them off guard when I’m able to beat them to a spot or keep up with them when they try to work a speed move. If they’re going with speed, I know they’re not turning to power too much, so I’m not as worried about the counter as being overly powerful, but of course, it changes week-to-week based on my scouting report. I could keep up with speed and I never worry too much about that.

JM: What’s your favorite way to demoralize your opponent?

SR: Constantly winning throughout the game no matter the play is the best way to demoralize your opponent. The quarter and the situation doesn’t matter. I always bring the same level of intensity to the table. They’re not going to beat me. They know that and that knowledge is enough to demoralize them. I’m not much of a trash talker, but at the end of the game when they haven’t beaten me even one time, and I continuously came out on top, that speaks volumes. I don’t have to say much.

JM: I’ve really appreciated your time today. I feel like this conversation has captured why you’re one of the more exciting offensive line prospects available in the 2022 NFL Draft. What kind of impact is Sean Rhyan going to make at the next level?