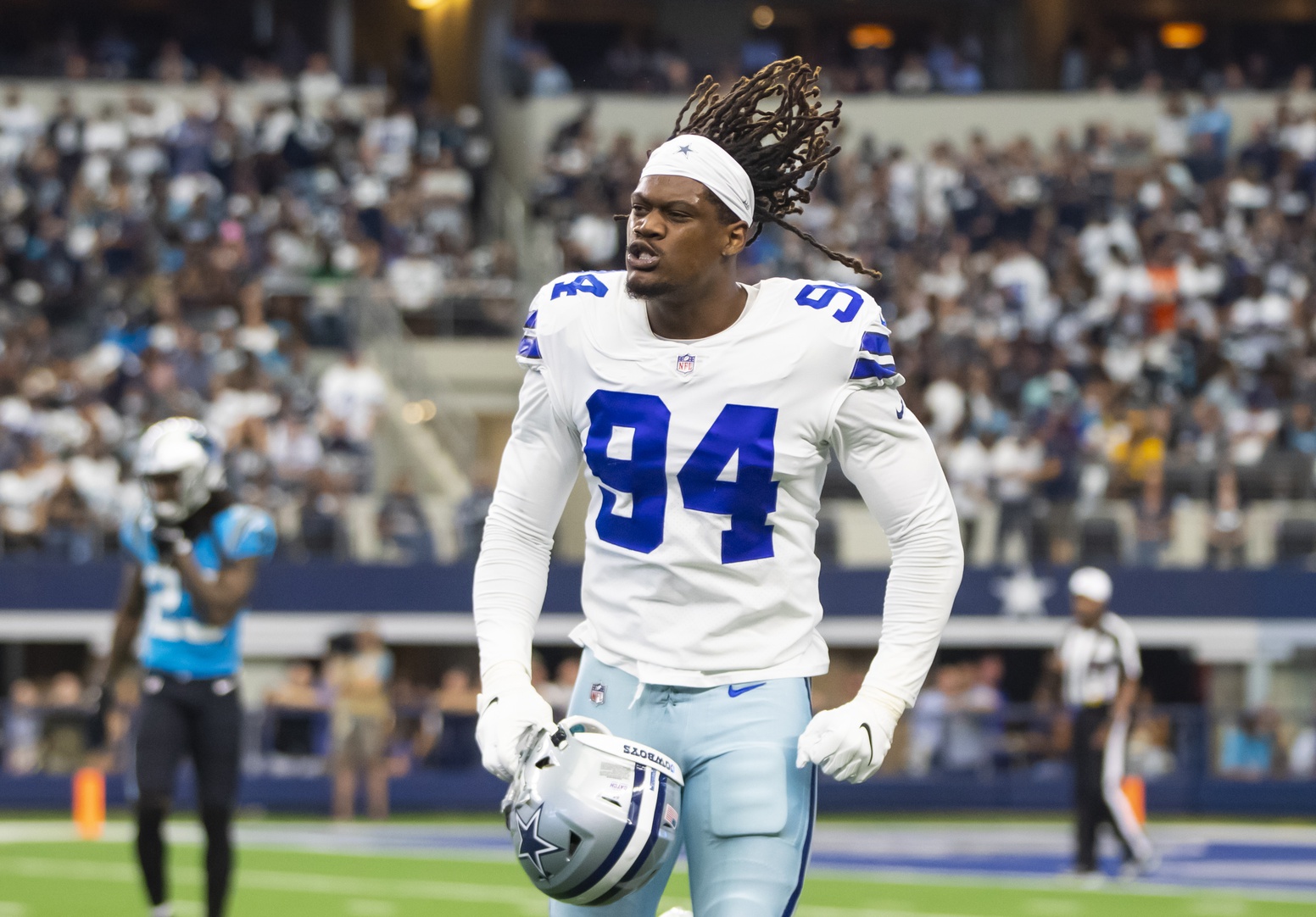 Seahawks Should Target These 6 Free Agents

The Seattle Seahawks are entering a crucial offseason after disappointingly missing the postseason in 2021. Seattle plays in an ultra-competitive NFC West division that sent three teams to the playoffs, including the eventual Super Bowl-winning Los Angeles Rams. General manager John Schneider must improve a roster that is playing catch up with the Rams, San Francisco 49ers, and Arizona Cardinals. Franchise quarterback Russell Wilson isn't getting younger, and Schenider should be an aggressive player in free agency as his Seahawks are running out of time to capture another Lombardi Trophy in the Wilson era. The Seahawks do possess the resources necessary to take a sizable step forward in 2022. Seattle currently has more than $35 million in cap space, via Spotrac. That number could rise significantly via veteran releases and restructures. The majority of Seattle's crucial performers are already under contract for 2022, but a few key underrated contributors are set to witness their contracts expire in March. That list includes left tackle Duane Brown, Gerald Everett, Quandre Diggs, Ethan Pocic, and several others. The Seahawks don’t have a first-round draft pick as a result of the Jamal Adams trade, a fact that could make them even more aggressive in free agency. With cap, team needs, pending free agents, and draft selections all put into consideration, here are three offensive and defensive free agents Seattle could target when the signing period begins on March 14.

Brown is an unrestricted free agent and it's time for the Seahawks to move on from the aging talent. Brown has experienced an illustrious career as a high-level blindside protector, but the former Virginia Tech standout will turn 37 years of age before the 2022 campaign kicks off. Seattle must begin thinking of the future when addressing the left tackle position this offseason. Eric Fisher would represent a multi-year solution. The former No. 1 overall selection in the 2013 NFL Draft, Fisher actually experienced a solid bounce-back campaign in 2021. Fisher signed a one-year prove-it deal with the Indianapolis Colts last offseason and showcased that he can still command the position at a relatively high level. Fan bases rarely gush over a player like Fisher, but he's a better player than most give credit for. Now more than a full year removed from a devastating torn Achilles injury, Fisher will be even better in 2022 than he was this past season. Adding Fisher to the fray would help Seattle's offense hum along on schedule. He's an excellent fit for how offensive coordinator Shane Waldron wants to run this offense. Fisher would provide the Seahawks with better offensive line play than Brown did a year ago.

Adding a capable third receiver qualifies as an underrated need for the Seahawks' offense this offseason. D.K. Metcalf and Tyler Lockett undeniably combine to form one of the most fearless and productive one-two punches in all of football, but the majority of successful NFL offenses are three-deep at the position nowadays. The Rams, Cardinals, and 49ers certainly are, and those are the teams Seattle most measure themselves against throughout the offseason. The 2021 drafting of Dee Eskridge was meant to address this need, but Eskridge's rookie season was largely lost due to injury, and Schenider would be wise to add some competition to the WR3 position going forward. The aging Emmanuel Sanders remains a smooth, chain-moving receiver. Sanders has excelled at getting open throughout his illustrious career and little has changed in that department. He's more of a complementary option at this point, but that's exactly what the Seahawks require behind Metcalf and Lockett. If he doesn’t retire, Sanders should be available on a team-friendly, short-term deal and could turn out to be one of the smarter, low-cost signings made in free agency. We already love the metaphorical Wilson-to-Sanders connection.

The center position has been a cursed mess for the Seahawks in recent seasons. They just can't seem to find the appropriate solution. Passing on Creed Humphrey in the second round of the 2021 draft qualified as a missed opportunity to fix the position. The 2021 starter was Ethan Pocic, who has previously played guard and is set to become a free agent. Pocic earned $3 million last campaign and was an underwhelming performer. Pocic hasn't quite lived up to his second-round billing. Schneider has the resources to attempt to improve the productivity they've received from that position. Los Angeles' Brian Allen would certainly represent the desired upgrade. Allen does his best work in a zone-blocking scheme. Before Waldron became the offensive coordinator in Seattle, he spent three seasons with Allen in Los Angeles as the Rams' passing game coordinator and quarterbacks coach. Familiarity could play a huge role in this potential acquisition. Furthermore, signing Allen would pluck him away from Los Angeles, who qualifies as Seattle's biggest rivals within their division. That's the icing on the cake.

The Seahawks desperately need to find a more effective quarterback hunter this offseason. The aging Carlos Dunlap is no longer the elite-level pocket-rusher he used to be, and Seattle must surround him with more talent while limiting his role to a rotational one. L.J. Collier has failed to develop into the pass rusher Schenider hoped he'd become when he used a first-round selection on him. As a team, the Seahawks recorded just 34 sacks in 17 regular-season contests. The NFC West is loaded with three competitive quarterbacks. Kyler Murray and the equally elusive Trey Lance will make life increasingly difficult for Seattle's defensive line going forward. Positive reinforcements must be secured via free agency. The Dallas Cowboys will have difficulty retaining Randy Gregory. Jerry Jones' Cowboys are dealing with some salary cap-related issues and already have a ton of money tied into Demarcus Lawrence at the position. Gregory has been extremely productive when on the field. Gregory recorded six sacks in 12 games with the Cowboys in 2021, and would immediately become Seattle's most feared pass rusher in 2022.

Wholesale changes could be coming to Seattle's group of cornerbacks this offseason. D.J. Reed, Sidney Jones, Blessuan Austin, and John Reid are all set to witness their contracts expire in a few days' time. Schneider will almost certainly attempt to retain a few of these players, but improvements must be made to a secondary that allowed 265.5 passing yards per contest. Only the Baltimore Ravens gave up more through the air in 2021, and they dealt with injuries to Marcus Peters and Marlon Humphrey. One position Seattle must especially address is the nickel cornerback. Playing in the NFC West division means your nickel corner is going to be tested on a weekly basis against the likes of Cooper Kupp, Rondale Moore, possibly Christian Kirk, and Deebo Samuel. The Seahawks' defense lacked a high-level playmaker at the position a year ago. Bryce Callahan is an elite nickel cornerback that would immediately help Seattle better compete against the dynamic slot receivers within their division. Callahan is a scheme-transcendent talent that would lock down an underrated position in a high-flying, pass-friendly division.

Schneider should seriously consider adding a coverage-focused subpackage linebacker to his defense this offseason. The fearsome, productive duo of Jordyn Brooks and Bobby Wagner combined for an astounding 354 tackles in 2021, but neither player is particularly effective in coverage. It's a position that carries special importance when competing in a division with the Rams and Cardinals. Cleveland's Anthony Walker would represent a shrewd signing in that department. His skill set is extremely different when compared to Brooks and Wagner, which makes him a good fit as Seattle begins to diversify their defense. A former fifth-round selection of the Indianapolis Colts, Walker is an athletic linebacker that can step toward the line of scrimmage and cover tight ends and running backs one-vs-one in isolated scenarios. Walker consistently covers a ton of grass in coverage, which is especially valuable against offenses that attempt to spread opposing defenses thin by running receiver-heavy sets. The Cardinals and Kliff Kingsbury's version of the Air Raid system especially come to mind. Seattle’s defense desperately requires a subpackage linebacker to help them line up appropriately with the high-flying offenses in their division. Walker would be an affordable signing that would address a massive, underrated need.