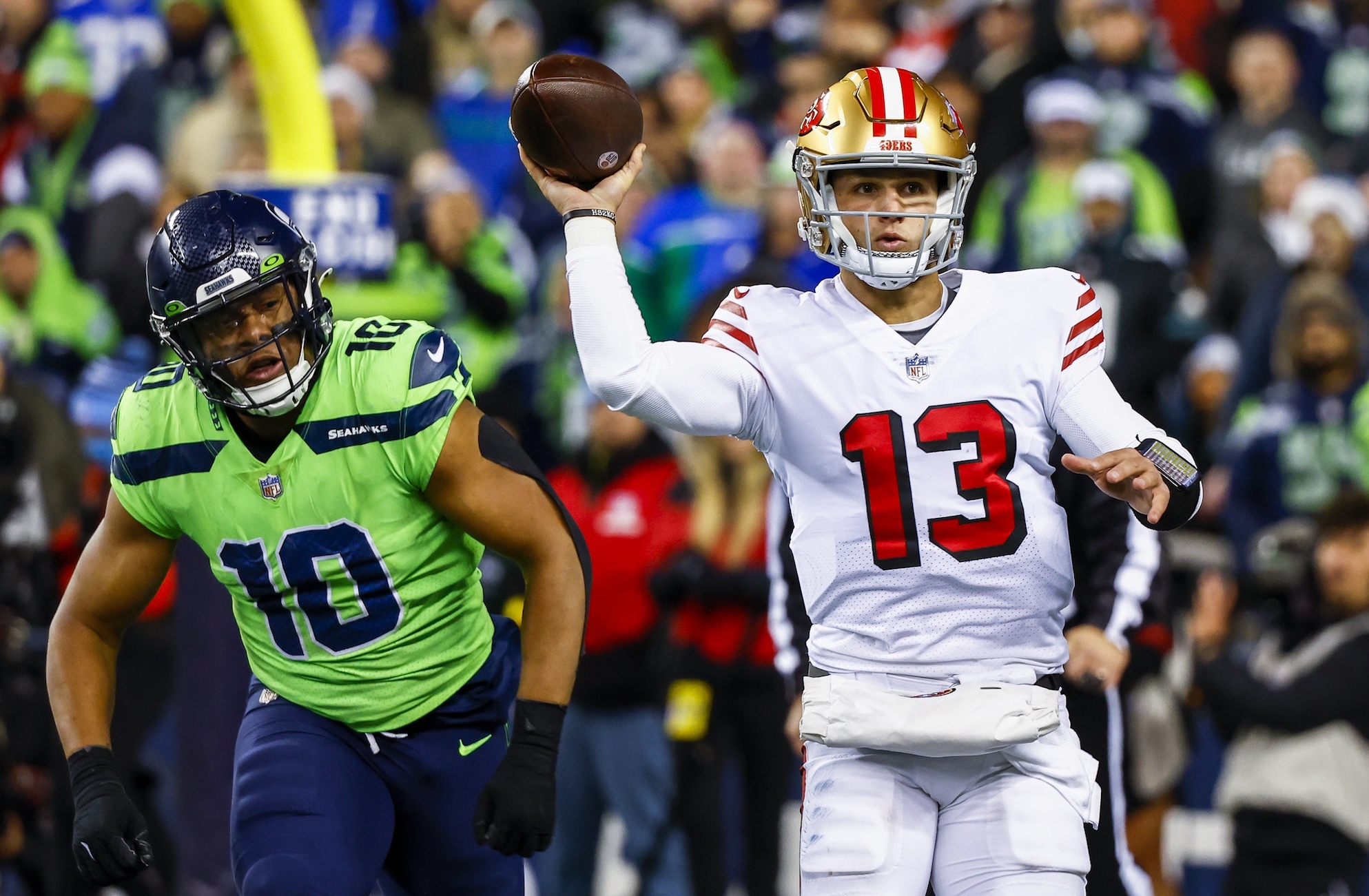 Can Seahawks Figure Brock Purdy Out?

San Francisco 49ers rookie quarterback Brock Purdy continues to light the world on fire as his squad prepares for the playoffs. San Francisco’s postseason journey begins against a familiar opponent on Saturday, the Seattle Seahawks. We’re going to learn a lot about Purdy’s long-term outlook following his performance against the Seahawks.

Purdy played well in his first meeting against Seattle. He completed 17-of-26 passing attempts for 217 yards, two touchdowns, and zero interceptions in San Francisco’s Week 15 victory over the Seahawks. Seattle will undoubtedly be studying that game film in preparation. They’ll attempt to identify missed opportunities and warts in Purdy’s game. How Purdy responds will reveal information about his long-term potential.

NFL defenses typically fare better against a quarterback once they have tape to study from a previous meeting. Seahawks defensive coordinator Clint Hurtt is no slouch. Seattle’s defensive staff is littered with high-quality coaches. Pete Carroll is a defensive-minded coach, and associate head coach Sean Desai is interviewing for the Cleveland Browns‘ vacant defensive coordinator gig. Seattle’s brain trust will be better prepared to face Purdy than any staff has this season.

The No. 262 overall selection in the 2022 NFL Draft, otherwise known as Mr. Irrelevant, there’s no denying that Purdy has benefited from the element of surprise. Purdy was never expected to take snaps for the 49ers this season. He entered the season as their third-string quarterback behind Trey Lance and Jimmy Garoppolo. Season-ending injuries to both Lance and Garoppolo forced Purdy into action. The results have been shocking.

Purdy first made waves by entering San Francisco’s contest against the Miami Dolphins, which resulted in a dominant win. The following week, he outdueled Tom Brady and the Tampa Bay Buccaneers as the 49ers cruised to a blowout 35-7 victory. All in all, Purdy has completed 67.1% of his passing attempts. He’s thrown 13 touchdowns versus just four interceptions. Kyle Shanahan and his QB-friendly system has helped Purdy make a flawless transition.

Purdy has taken advantage of the elite pass-catching weapons at his disposal. Purdy is thriving on regularly scheduled dropbacks. He’s completed 87-of-130 passing attempts that didn’t utilize play action, per Pro Football Focus. Those concepts have accounted for 77.1% of Purdy’s dropbacks attempts. They’ve resulted in nine of Purdy’s 13 touchdown tosses.

The Seahawks represent a difficult opponent statistically as well. Seattle’s stingy defense is allowing just 211.5 passing yards per contest. They’re the league’s 13th-ranked passing defense. Purdy must be wary of Seahawks rookie cornerback Tariq Woolen, who recorded a league-high six interceptions. The Seahawks finished the season plus-two in the turnover department. They totaled 14 interceptions as a unit.

The NFC lacks a clear-cut favorite to represent the conference in Super Bowl LVII. Purdy is playing well enough for the 49ers to compete for a Lombardi trophy. The sky’s the limit for Purdy and the 49ers if they can get past a familiar opponent that is the Seahawks.