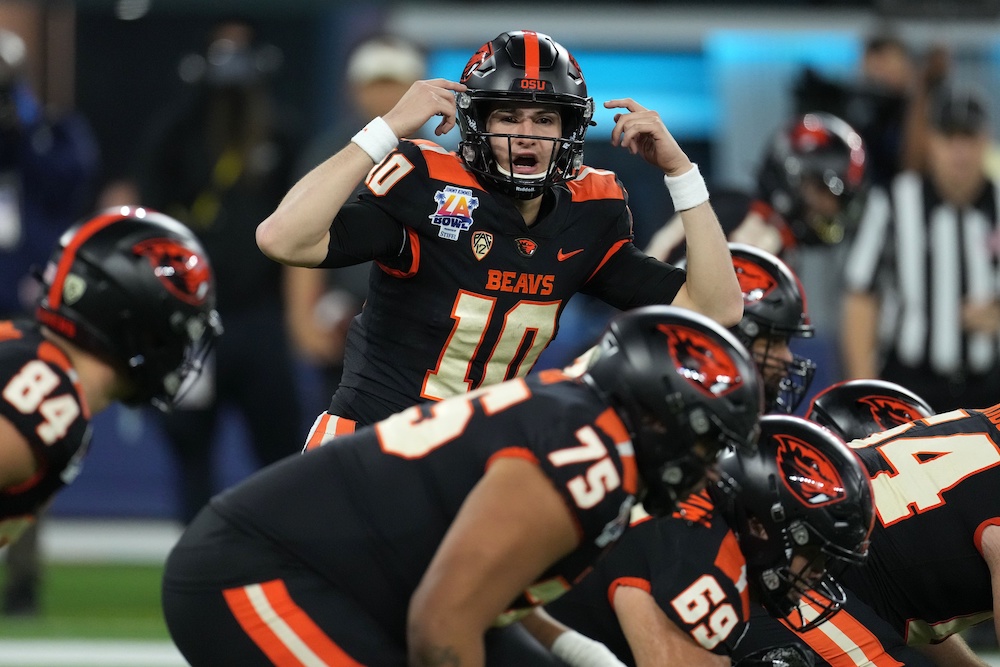 Oregon State has yet to name its starting quarterback for the 2022 season, but Chance Nolan, who started last year for the Beavers, is the favorite to win out in the competition as he looks to improve upon last year’s performance.

The position battle is one that tight end Luke Musgrave has described as a “good problem” and Nolan seems to share that mindset as he competes against 2020 starter Tristan Gebbia, back from a roughly one-and-a-half-year recovery from a hamstring injury, and Ben Gulbranson, who had shoulder surgery last June.

“Our room is so competitive,” Nolan said. “Day in and day out, you have to be on your A-game. Everyone in our room is improving every day and you can see it clearly. Everyone in here wants to be the best, but we have a great camaraderie as a group. We spend a lot of time coaching each other up and helping each other out to achieve the common goal of helping our football team, there’s no bad blood out there.”

Nolan finished last season with a completion rate of 64.2% with 2,677 passing yards, 19 touchdowns and 10 interceptions. He also carried the ball 70 times for 286 yards and three touchdowns on the ground. He says he hopes to more than double that rushing total this year and showcase athleticism more after previously finding success rushing the ball at the JUCO level when he was at Saddleback College.

Nolan has shown good foundational traits to build upon and has flashed some bright moments, showing that he can go through all his progressions and has a generally good feel for pressure in the pocket.

While Nolan wasn’t asked to throw the ball a ton in 2021 – which has a lot to do with the way Oregon State’s offense is set up– he had a notable performance against No. 11 ranked Oregon from a passing perspective, completing 25-of-39 passing attempts (64.1%) for 308 yards with two touchdowns and one interception to go with one rushing touchdown.

The Beavers ultimately lost that one, 38-29, but it should be counted as a win for Nolan alone with what he showed in that game. It’s not the first time he’s found success against the Ducks, either.

Oregon was ranked No. 15 when Nolan scored the game-winning touchdown on them in 2020, his first year with the team.

The success Nolan has found have not only to do with the tangibles, but what he brings intangibly as well.

“I think I bring a very even-keel mindset out there,” Nolan said. “I think people can gravitate toward that, and I think my overall understanding of the game of football is solid. Coach (Brian) Lindgren in this system, he’s really developed me – one of the biggest areas I’ve grown in is a deep understanding with coverages, which is something I struggled with some in JUCO. Understanding defensive schemes, what different types of coaching staffs are going to try to do to you. The way we do game-planning here during the week has changed my approach a lot.”

Making the jump to a higher level has come with some difficulties, but it’s made Nolan a better player overall with a lot of responsibility on his shoulders and with a run game that’s on the more complicated end of the spectrum.

“At the Division I level, it’s a whole lot different,” he said. “I’m having to read defensive fronts, having to read different safety rotations, corners and our run game at Oregon State is pretty intricate. We do a lot of checks at the line so a lot of the run game is on me, getting us into the right play based on the defensive front and other factors. The quarterback in this offense is a big part of both the run game and the passing game. We have the authority to change protections and they give us a lot of freedom at the line of scrimmage overall, which is something that I like a lot.”

He’s got a long personal list of things he wants to improve on heading into his third year at Oregon State and has been putting in the work to achieve his goals this offseason to take a big next step in 2022. The biggest thing to him is remaining the same quarterback on every play and staying in a constant rhythm.

“I think I’ve shown I can make quick decisions and I can make a lot of the throws. I’m working on my consistency,” Nolan said. “My release and my balance in the pocket is something me and the coaching staff here have been working on a lot, just kind of getting that short stride step down in the ground before my release. Things like that help with accuracy so we can get my completion percentage up.”

Nolan hopes that with the strides he makes in his own right, the offense can become much more explosive this season than it was in 2021.

“I’m improving on my deep ball, putting some more air on it,” said Nolan. “I think at times, I was trying to be too perfect with the line in flight, so working on that with my guys. Hopefully that will translate into us getting more big plays this year – we missed a lot last year that I wish I could have had back.”

Oregon State opens its season against the Boise State Broncos on Sept. 3, which could very well mark Nolan’s first chance of the year to show just how much he’s elevated.