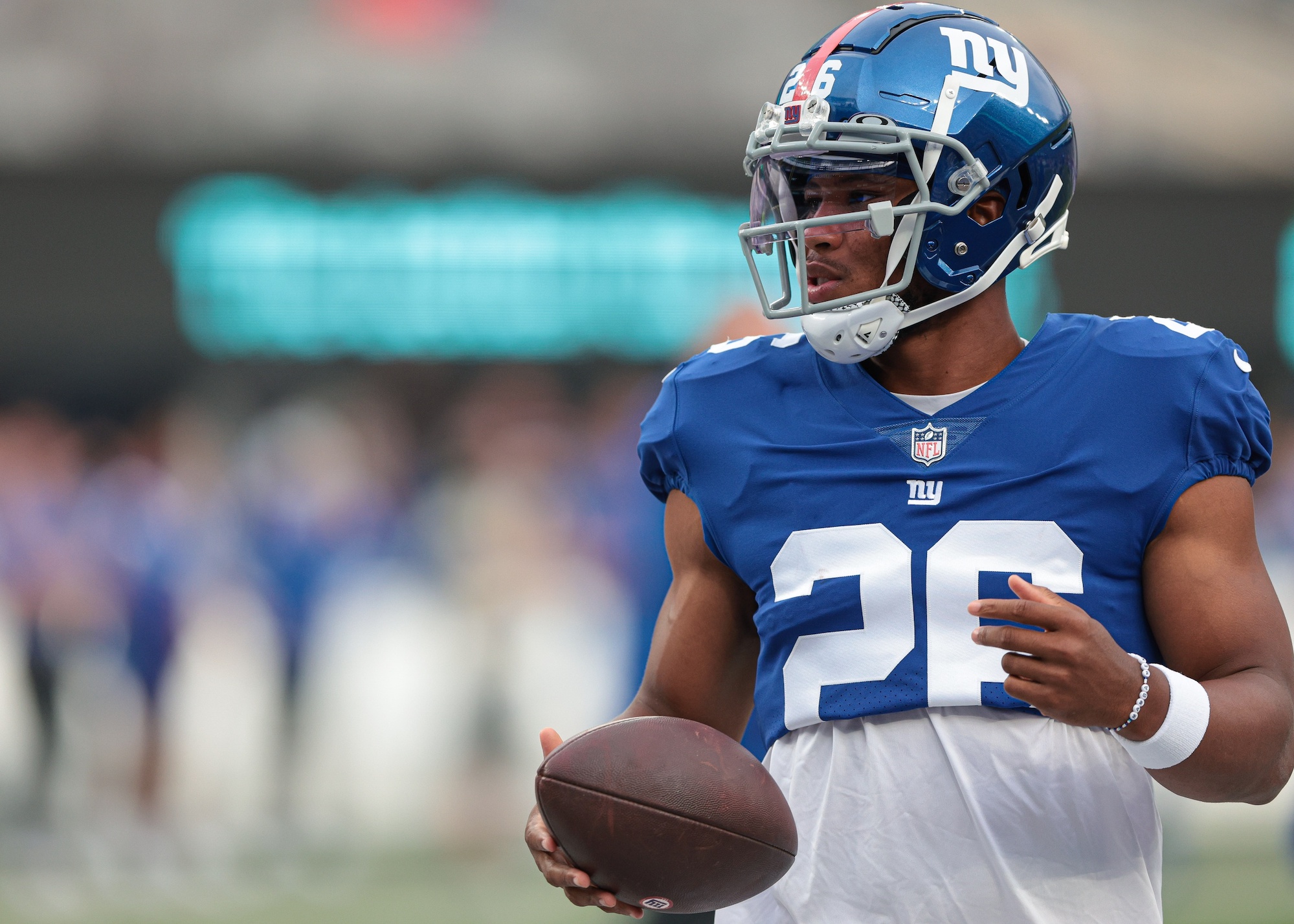 New York Giants running back Saquon Barkley has been electric this season. Barkley has enjoyed a much-needed resurgent period. Barkley currently ranks top-five in every meaningful statistical category among all qualifying running backs. He’s totaled 317 rushing yards (second) and two rushing touchdowns (fifth). Barkley’s 6.0 yards per carry also rank fifth. The No. 2 overall selection in the 2018 NFL Draft, Barkley is finally living up to his pre-draft potential. So why would the Giants consider trading Barkley before October’s trade deadline?

Former NFL player and long-time reporter Boomer Esiason recently mentioned the possibility on Kay Adams’ podcast. It’s easy to understand why the Giants could entertain trading Barkley. Barkley’s market is never going to be hotter given his current form. The Giants are clearly at the beginning of a rebuild under a new regime. General manager Joe Schoen and head coach Brian Daboll took a long-term approach when making moves this past offseason. Possessing extra draft capital to replenish the roster with younger talent is tempting.

The Giants can afford to be awfully choosy in relation to trading Barkley, however. It sounds unrealistic, but the Giants may be a postseason contender with an elite Barkley in their backfield. Securing long-term improvement remains the hopeful outlook, but Schoen and Daboll were hired to win. They’ve won two of three thus far, and an eight-or-nine win campaign may be enough to claim a postseason berth in the NFC.

There’s also the manner of compensation. The Giants would likely receive a third-round compensatory selection if Barkley ultimately departs the franchise via free agency. Why would the Giants accept less in exchange for Barkley’s services via an in-season trade? The compensatory formula indicates the Giants can demand a premium draft selection throughout negotiations. Running back is of deteriorating importance in today’s pass-happy league and it’s unclear what teams would be willing to part with to acquire Barkley. That indicates a trade is unlikely to become reality.

Barkley is in a fate-deciding contract season. Some believe that fate has already been decided despite his current output. Barkley is earning a fully-guaranteed $7.217 million via a fifth-year player option that was executed by the previous regime. Schoen and Daboll routinely received production from their running backs in Buffalo (where they last worked together) without investing heavy capital into the position.

It’s worth acknowledging the Giants possess the funds necessary to re-sign Barkley should they decide to travel down that path. At his current pace, Barkley will be in a position to command a rather lucrative second contract. The Giants are currently projected to possess $56.4 million in financial freedom during the upcoming offseason, via Spotrac. That number will likely rise via veteran releases and restructures. Only the Chicago Bears are primed to possess more cap space.

Schoen and Daboll could decide to spend their resources elsewhere, particularly at quarterback, where Daniel Jones appears unlikely to return in 2023. On the flip side, should the Giants decide to draft a quarterback as opposed to acquiring a high-priced veteran, an effective Barkley and running game could be a young quarterback’s best friend. Don’t completely rule out the possibility that Barkley remains a Giant in 2023.

Entertaining a trade for Barkley is a worthy exercise, but actually executing a deal is far more complicated. The Giants are winning largely due to Barkley’s presence. The compensatory formula removes some of the pressure to move Barkley immediately. Schoen and Daboll are better off attempting to ride Barkley’s production into the postseason before ultimately making a difficult decision next offseason.