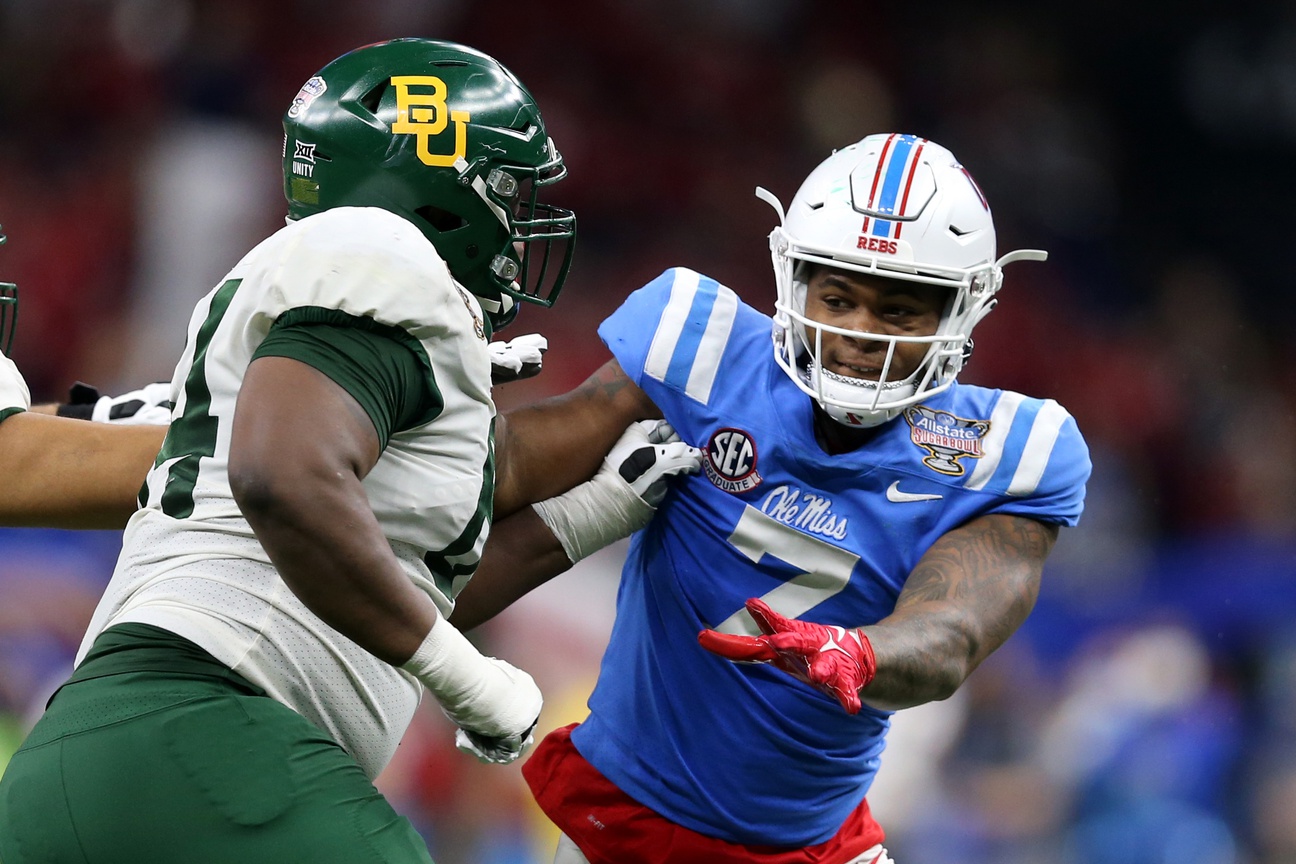 A Pass Rusher No One is Talking About

The 2022 NFL Draft class is absolutely littered with potential game-changing pass rushers that should fly off the board early and often in April. We’re in the midst of a wild and unpredictable offseason that has further showcased the value an elite quarterback hunter brings to an NFL franchise. The Buffalo Bills paid a premium (six years, $120 million) to secure the services of Von Miller, the Las Vegas Raiders wisely signed free-agent pass rusher Chandler Jones in a move that will pair him opposite Maxx Crosby. Elsewhere, the Los Angeles Chargers acquired Khalil Mack from the Chicago Bears. Translation? Pass rushers currently carry more value than ever before in today’s pass-happy league.

It’s primarily why the Jacksonville Jaguars are largely expected to use the No. 1 overall selection on an edge defender. With a franchise quarterback already in the fold, the Jaguars could choose from Michigan’s Aidan Hutchinson, Georgia’s Travon Walker or Oregon’s Kayvon Thibodeaux at the top of the draft. Florida State’s Jermaine Johnson and Purdue’s George Karlaftis represent other top-rated prospects at the position. In a class that’s loaded with pass-rushing talent, it would be easy to allow other talented players to fall by the wayside. Be careful of partaking in such exercises. Ole Miss’ Sam Williams is one of those players that absolutely deserves your attention.

A three-year impactful pass rusher for the Rebels, Williams applied consistent pressure on opposing quarterbacks in the most competitive conference in all of college football. Across three campaigns, Williams accumulated excellent numbers that include 22.5 sacks, 32.5 tackles for loss, 134 total tackles and six forced fumbles. Williams then attended the NFL Scouting Combine where he further improved his draft stock by showcasing himself in rather solid fashion. The 6-foot-3, 261-pound Williams ran the 40-yard dash in a blazing 4.46 seconds and leaped to an excellent 123-inch broad jump. Both results place Williams in elite territory when historically compared to his counterparts. A 32.5-inch vertical may be considered substandard by some but it’s certainly not poor enough to distract from the eye-popping results Williams scored elsewhere. Much like the player himself, you’d be foolish to let Williams’ combine results fly under the radar.

Williams’ NFL draft journey took him through the JUCO ranks when he initially landed at Northeast Mississippi Community College following high school. Williams got his feet wet as a freshman in 2017 before thoroughly dominating throughout the 2018 campaign, proving his talent far superseded the junior college circuit by totaling 75 tackles, 28.5 tackles for loss, 17.5 sacks, four forced fumbles and four pass breakups as a sophomore. Ole Miss took notice by quickly welcoming Williams to the program ahead of the 2019 season and the rest is history.

As a pass rusher, Williams expertly converts speed to power and is strong enough to defeat double teams, which he faced a ton of at Ole Miss while lining up across multiple positions for the Rebels’ flexible and free-flowing defensive front. A versatile player, Williams especially thrives as an early-down run defender. Williams’ work to stifle opposing rushing attacks is precisely why he’ll get himself on an NFL field sooner than many of his fellow draft prospects. Williams is extremely heavy at the point of attack and does an excellent job setting the edge.

“I get a thrill from playing football and stopping the run,” Williams recently said in an exclusive interview with The Draft Network. “Stopping the run on first and second down? Rushing the passer on third down? I love to learn and impact the game.”

Wherever Williams ultimately lands via the NFL draft, his defensive coordinator and position coach will fall in love with his overall physical approach to all aspects of football.

Williams isn’t the sexiest or flashiest pass rusher in this loaded draft class, but he’s exactly the type that outperforms his draft slot while making 31 competing general managers regret their decision to pass on him. Williams has all of the tools necessary to become a quality NFL player while rewarding the professional team that decided to show faith in his abilities. Watch out for his potential.