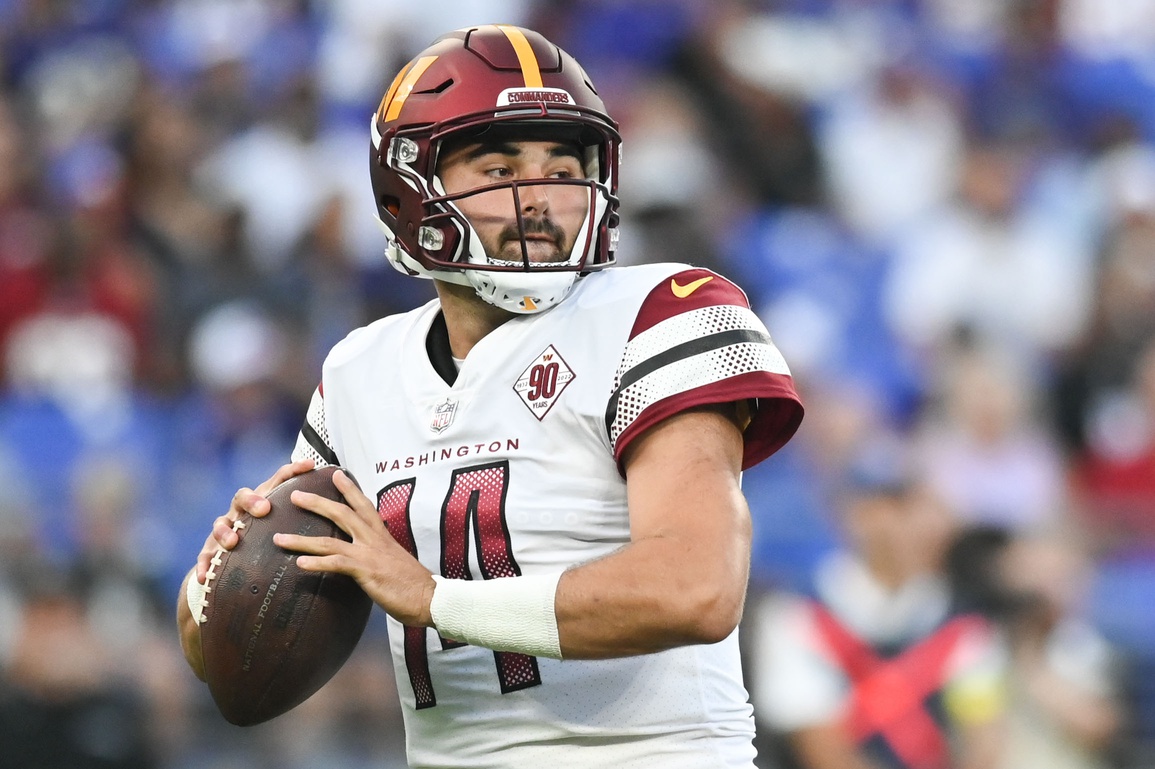 What Can We Expect In Sam Howell’s 1st Start?

A fifth-round talent that fell into the lap of the Washington Commanders on day three of the 2022 NFL Draft, the final week of the 2022 campaign has provided a path to snaps for rookie quarterback Sam Howell. An uber-successful talent for the North Carolina Tar Heels, the third quarterback on head coach Ron Rivera’s depth chart in the summer has now become QB1—at least for now.

The NFL’s preseason leader in passing yards, while it was the preseason and it must be taken with a grain of salt, Howell was excellent in the significant amount of time that he saw in three outings. An NFL debut that saw him provide a jolt of energy into the Commanders’ offense during the second half of their loss to the Carolina Panthers, Howell’s first impression was as good as it could possibly have been. Pumping throws into tight windows, confidence amongst chaos, and creating outside of structure with his legs, Howell looked the part in leading an offense.

Love how Sam Howell drives this ball outside the numbers. He can spin it. pic.twitter.com/ts7raBtU0S

Throws like this are what get you excited—outside the numbers to a spot only his guy has a chance is textbook quarterbacking. A lot of the time, we see young signal-callers enter the league as throwers, not quarterbacks—understand that there is a definitive difference. For Howell, while he has the ability to create outside the pocket and play sandlot ball when the time calls for it, his ability to consistently sit calmly under center with unfamiliar bodies around him were key movement skills to hone in on from his performances this summer.

No, it wasn’t always easy as his 60 minutes of action against Baltimore saw him get knocked around more than he would have liked to, but it’s how you bounce back after negative yardage or a missed shot play that writes the narrative for guys in the NFL. And in his first NFL start this week, it won’t be against third-stringers as the visiting Dallas Cowboys battle for the right to potentially call themselves NFC East champs.

Washington’s third different starting quarterback in the last trio of games, as fun as it’ll be to see Howell on the football field, what remains a massive storyline is the architecture of Scott Turner’s offense. A scheme that won’t be deemed ‘QB friendly’ by anyone, allowing Howell to work into a rhythm against a physical Dallas defense could tell the story early. He’ll have plenty of talent on the outside in Terry McLaurin, Jahan Dotson, and Curtis Samuel to pepper with targets, but getting comfortable quickly with screens, slants, and rhythm throws will allow his confidence to grow before he’s put into long down and distances and asked to maneuver away from a stout Cowboys front seven.

It’s a heck of a first test, but one Sam Howell won’t shy away from as a battle-tested athlete during his days in Chapel Hill. It’s an opportunity to leave a lasting impression, and with questions remaining in abundance toward who Washington will start come Week 1 next fall, positive signs in his first start should hold weight when it comes to the Commanders’ future in the pocket.