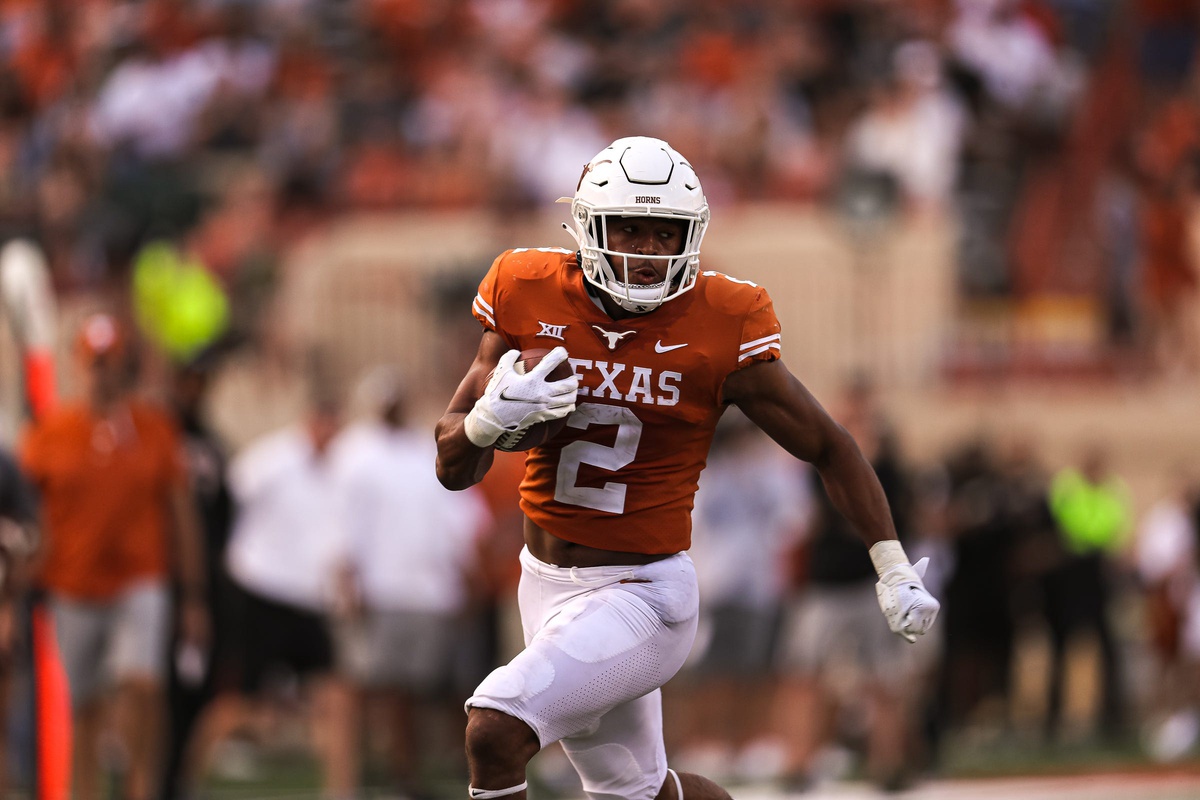 Roschon Johnson About To Carve Out His Own Draft Legacy

The “other” rusher within the Texas Longhorns backfield, it’s time you become acquainted with running back Roschon Johnson. The Robin to Bijan Robinson’s Batman for Steve Sarkisian’s group, Johnson is a player whose skill set has been overshadowed by the talent of Robinson over the last few campaigns. But his elite skill set hasn’t gone unnoticed by NFL draft evaluators near and far.

Roschon Johnson hurdles the defender to get in the end zone for his second TD of the day! pic.twitter.com/VnMHpyEYOX

The first-off-the-bus type of athlete at 6-foot-2 and 223 pounds fits the mold of a guy offensive coordinators hand the ball off to 15 times a game at the NFL level. While his production hasn’t ranked among the country’s elite for obvious reasons, projecting his game to Sundays isn’t rocket science—he can be a flat-out game-changer. Vision, acceleration, power, athleticism, he doesn’t check boxes, he bolds them behind a game that has forced NFL decision-makers to move him up their boards.

A true senior that initially entered the fold in Austin as an All-American quarterback at the prep level, four seasons in burnt orange have seen him become an impact playmaker each and every week. It’s not often you see talents like Johnson—at a major Power Five program—play out their eligibility, but as much as he’ll offer on the field as a dynamic ball-carrier, his experience in the fire of Big 12 football with more than 1,200 snaps on offense and another 458 on special teams will present an NFL team with an experienced athlete inside a locker room.

A tough runner that isn’t afraid to run through and around defenders, Johnson is another name that is worth discussing when it comes to a 2023 RB class as deep as any positional group in the class. While Robinson headlines a group littered with differentiating skill sets that will pop on each of the draft’s three days, a player like Johnson has all the opportunity in the world to see his name continue to rise after accepting an invite to the Senior Bowl—an event that will represent the last chance for Johnson to showcase his game in a padded, football environment. While participating in individual drills in pass pro, showcasing his footwork and vision in full 11-on-11 sessions, and working in the passing game against linebackers, his draft stock—a lot like we saw with Florida’s Dameon Pierce and Alabama’s Brian Robinson Jr. last winter in Mobile—could have a jetpack attached to it as one of just a few backs in attendance.

While the prior mentioned spotlight has been centered around Robinson since he arrived on campus, and rightly so, Roschon Johnson should see his stock rise as opportunities away from Austin present themselves and more eyes center on his physical brand of football.