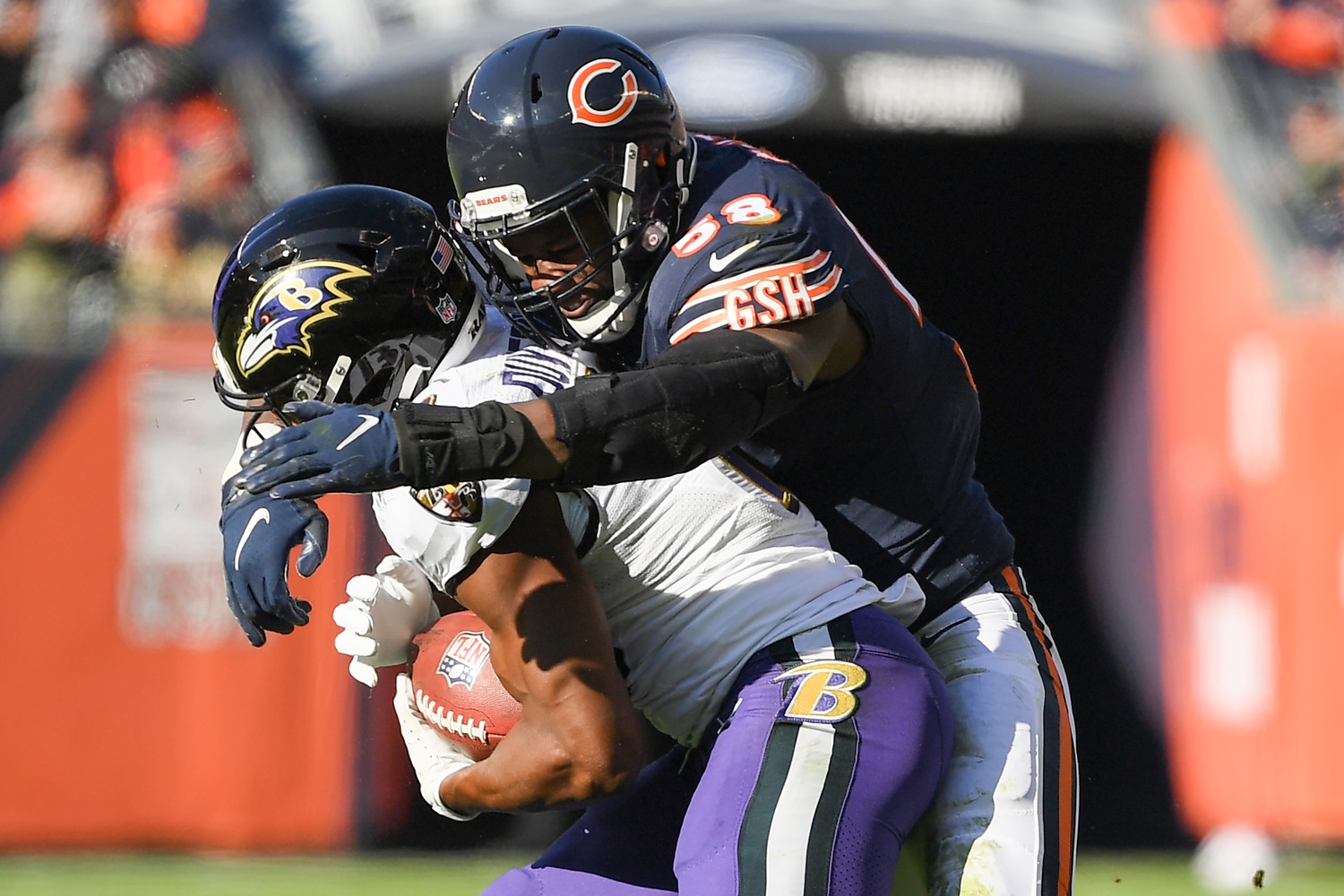 What Should The Bears Pay Roquan Smith?

According to multiple reports, Chicago Bears linebacker Roquan Smith will not be participating at training camp when Bears veterans report on Tuesday. Smith is currently scheduled to play the 2022 campaign under the fifth-year option, which former Bears General Manager Ryan Pace triggered a year ago. It guarantees Smith a salary of $9.735 million for the upcoming season.

Smith appears disinterested in playing on what’s now essentially a one-year contract. The former Georgia standout may remain absent from training camp until a more suitable solution is reached.

New Bears General Manager Ryan Poles faces his first major contract test and should do the right thing. Smith has been an outstanding defender for the Bears.

In 2021, the Mount Vernon, Georgia native arguably enjoyed a career-best campaign. Smith recorded career highs in total tackles (163) while also accumulating 12.0 tackles for loss, four quarterback hits, three sacks, three pass breakups, and one interception. As both parties continue working through the details of a potential long-term deal, a five-year contract worth $92.5 million with $50 million in guarantees would represent a fair agreement. It would make Smith one of the highest-paid inside linebackers of all time, falling just short of the five-year, $98.5 million contract Darius Leonard signed with the Colts last year.

Smith has been the ultimate player and teammate for a Bears organization that recently hit the reset button. Smith routinely participates in voluntary offseason workouts. His commitment to the organization has typically been outstanding despite the new Bears regime playing hardball with his next contract. Smith is one of the faces of the franchise. The situation has reached a boiling point and his decision to remain away from camp is an understandable one.

Getting a contract done with Smith would benefit Poles’ public image. Poles’ first offseason in charge has left plenty to be desired. A failure to appropriately build around franchise quarterback Justin Fields has been evident and disappointing. The Bears feature several question marks across their offensive line. They may feature the worst group of wide receivers in the entire league. The 2022 NFL Draft was expected to deliver the Bears an immediate starter at wide receiver, but Poles didn’t draft one until the third round (Velus Jones Jr.) Furthermore, three of Poles’ offseason signings (Byron Pringle, Matthew Adams, and David Moore) have been arrested this summer. It doesn’t speak highly of his ability to assess character.

The Bears are rebuilding. The roster remains in transition and has several holes on both sides of the ball. The presence of Fields at quarterback delivers hope for a bright future, but Poles must continue constructing this roster with promising, ascending talents. Smith turned 25 years old in April and should be viewed as a key building block for the Bears’ future.

The Bears’ defense has experienced an abundance of change this offseason. Veteran sack-artist Khalil Mack was traded to the Los Angeles Chargers in exchange for draft capital. Eddie Goldman was released (and eventually retired). The futures of both Eddie Jackson and Robert Quinn hang in the balance. Chicago’s defense needs a new leader to usher them into the next era, and Smith represents the heir apparent.

Poles must show more initiative when engaging in contract discussions with Smith. Training camp represents a key event for a Bears franchise that can’t afford any distractions. Every practice Smith is absent for represents a missed opportunity. Offering Smith a lucrative extension would be a wise decision.